In A Boy's Pocket 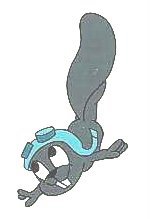 I am flipping through the nostalgia chronicles tonight. This sojourn was triggered by a movie on television in the next room. The movie, Pleasantville, is a fantasy about a brother and sister who get transported into the imaginary world of a TV show. Probably because of the similarity of the era of the show and of my youth, the transition from now to then was natural.

I remember the last time I saw Rocky. I certainly don't mean Rocky Balboa. (I will not see Rocky VI!) In fact, here and now I am making that an early New Year's Resolution. You know, for the first time in a long time, I am confident that this is a resolution that I will actually keep. Well, that's not exactly true, last year I resolved to make no resolutions.
....Rocket J. Squirrel is a significant part of my youth, but he isn't the Rocky I so fondly remember. When I last saw my Rocky, I was a young bean pole of a lad in the mid-fifties. I was a strapping fifty-pounds when soaking wet. My voice hadn't changed yet and girls were personae non gratis.
....Growing up in rural West Virginia in the shadow of the Appalachians, I like so many boys my age, often made pets of orphaned animals of the forest. It was not uncommon to see pet rabbits, raccoons, opossums and even skunks. By far, the most popular wild pet was a squirrel. The most desirable squirrel was a flying squirrel.
....I found a nest of three newborn flying squirrels in a hollow of an old sycamore tree. For two days I returned to that spot to check on the nest. Each day, however, one of them would be missing. I had avoided touching the nest for fear that my scent would disturb the mother and cause her to abandon her brood. On the day that I found only one baby in the nest, I was first led to believe that the mother had been moving her young to another nest. That idea was quashed when I heard flapping wings above and behind me. There was a red hawk sitting on a limb watching me. I realize that it had been raiding the nest, probably to feed her own young. Chances were good that the hawk must've grabbed the mother squirrel too.
....Call it interfering with the natural order of things if you will, but I climbed the tree to rescue the remaining baby squirrel. I carried it home in the pocket of my shirt. Stealing one of my sisters' Betsy-wets baby doll bottles, I fed it some milk as often as I could. I kept it in a bird cage in the basement for several weeks.
....By the time I was taking it out of the cage, I had already named it Rocky. He would come to me when I made clicking sounds. I had been feeding it unsalted peanuts and pieces of toast. I guess it recognized me as its "mother." I taught it to climb up my clothes and into my shirt pocket, at first by luring him there with the peanuts. Eventually all I had to do was to pat my chest and he would settle into his "nest." When I was sure he wouldn't run away or venture too far from me, I took him outside. He always seemed excited to go outdoors. It wasn't long before he was climbing up trees and leaping from branch to branch. I envied his athleticism. I took great pleasure when I called him from the trees. It was a beautiful sight to see Rocky leap into mid air and glide so gracefully to me. The flaps of skin running from his front legs to the back legs would be spread out catching the wind and holding him aloft. Like a rudder his tail deftly acted like a rudder steering him on his desired path. I could feel his little claws take hold as he landed on my shoulder. When I turned my head to him, he would touch his nose against mine. A kiss perhaps? Then he would scamper down into the pocket.
....We were inseparable for seven months. He would sit on my shoulder when I was riding my bike. When I was at school he would be in any one of the trees. He seemed to learn that the bell signaled that I would be coming out, and he'd be in flight the moment I came into view. This event always drew a crowd. The other kids would gather around me, fascinated by my little friend. Though I didn't like girls at that time, I would only later realize that Rocky was a chick magnet.

Rocky had come back to say goodbye and to thank me for the warmth and safety he experienced ... In a boy's pocket.

No.407
Curmudgeon responsible for this post: Hale McKay at 10:50 PM

What a lovely story :)

Thanks for visiting my blog, also:)

Wow, that was a fantastic memory - Thanks for sharing it!

Your story is so much like mine and thanks for sharing it with all. I went a little further with Southern Flying Squirrels and now own my own company dedicated to them. Please visit us at www.glidinon.com and thanks again!