Beating Around The Bush 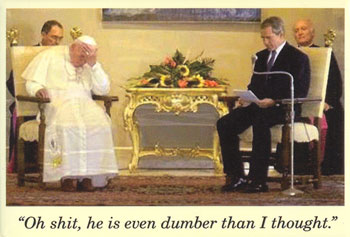 The Pointmeister was able to get his mitts on the transcript of the recent Summit meeting between President Bush and the Pope. What follows is an inexpurgated segment of their private talks before the microphones were turned on and the cameras were allowed to roll.

Bush: I see we are going to discuss Catalytic converters.
Pope: That's Catholic converts. We celebrate new converts with special Rites.
Bush: I know all about converted rice. We throw it at weddings. We used Uncle Bens. Gosh darn stuff gets in your hair and pockets ...
Pope: (Groan.)
Bush: You have a headache, Pope? Er ... Mr. Pope? My wife Laura takes Tylenol for headaches. It must work too, 'cause she takes them almost every night. She says that's one bush I can't have.
Pope: Ahem. We have some condos leased for the converts to live during the rites.
Bush: Condoleeza Rice? No, she was unable to make the trip. It seems she was having a bad hair day. Now that I think about it, she has a bad hair day everyday.

Pope: No, condos. So they will be safe.
Bush: Oh, I see what you mean - condoms. We call them safes too. Nah, I never use them, myself. How do you think we had the twins? Immaculate Contraception?
Pope: The Church does not permit the use of those or other means of contraception. We prefer rhythm.
Bush: Oh. I'm afraid I don't dance very good.
Pope: I mean ... Oh, never mind. Your wife has headaches.
Bush: Why, yes ... How did you know? Wait a minute ... You been to the White House when I was away Presidenting?
Pope: Mr. President, you just told me about her headaches.
Bush: Yes, so I did, didn't I? Besides you have a vow of Celery don't you?
Pope: (Blank stare.)
Bush: I just remembered the story about when you went to Mount Olive.
Pope: I went to Mount Olive?
Bush: Don't play dumb with me, Popester! I heared Popeye beat the crap out of you! Olive is his woman.
Pope: I don't suppose you brought any of those Tylenols with you?
Bush: Sure thing. (Fumbles through pockets.) Here you go. Take two.
Pope: Thank you. (Gulp!) Purple Tylenol is stronger than the regular white ones?
Bush: Purple? Holy shit! Sorry about the cussin', but you just took my Viagra!
Pope: Wha

t is this Viagra? Will it harm me?
Bush: Too hard to tell. But it is a good thing you wear those loose fitting pajamas all the time.
Pope: It's a robe. A habit.
Bush: Ah, okay. I have a habit when I'm home. I walk around nekkid.
Pope: (Blesses self with sign of the cross.)
Bush: I'm afraid you lost me there, Popemeister. I can't speak a word of sign language.
Pope: Ahem. Can we get to the problems at hand - the reason for this summit?
Bush: Trust me, when those Viagras kick in, you will definitely have the solution in hand.
Pope: How is your search going in Iraq for those Weapons of Mass Destruction, Mr. President?
Bush: Don't you go worrying about those, oh Pontificating one. They have no weapons that can wreck your Sunday masses.

It is here that the private conversation between the Pope and the President ended. The press had taken their seats and the official summit began. You can see the summit on your television sets. Check your local listings for the time and networks.
Here's a hint, tune into your favorite can't-miss programs, and there it will be. Your preempted programs will be back on the following week, unless of course, the networks choose to rerun this important summit.

After the summit, there was a brief handshaking session. There were a few moments out of the earshot of the dignitaries and the press that the Pope and the President had a few more private words. Once again, The Pointmeister has scoo 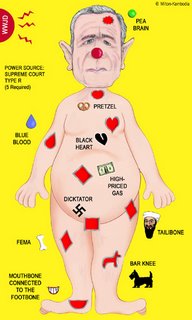 Bush: I'd like to present to you a special gift as a token of my gratitude for meeting with me in this important summit. It is a game I am going to market when my Presidency is over. It is based on a popular kids game from the fifties. I call it the George W. Bush Operation Game.

Pope: This image of you is anatomically correct?

Bush: Well, Laura use to think it was atomic ... But that was before the headaches.

Pope: You will excuse me, please. But there is a certain ... Matter I must see to ... In my chambers.

Bush: Heh heh. Ahem. Of course. I hope you have more than one chambermaid. You took two of them ... Remember?

Pope: (Scratches head in confusion with one hand, while reaching inside his robe with the other.)

The only way The Poinmeister can think to close out this exclusive, is to say it is probably most fortunate and apropos that there is a Missionary position.

Curmudgeon responsible for this post: Hale McKay at 5:42 PM

Oh. My. Damn.
I laughed so hard that I snorted. Twice.

Bush condoms. BAHAHAHAHAHA!
That makes me giggle every time I think of it.

Let's just hope that whoever we get in the White House can help us get the nasty Bush taste out of our mouths.

Mike, you are just too damn funny!
"Trust me, when those Viagras kick in, you will definitely have the solution in hand." This just busted me up, I laughed so hard I couldn't breath. If belly laughs are as good for your health as they say. You good sir are my doctor!

Bush condoms? I think I'd rather just not have sex after all. I wouldn't feel very protected.

Great post. You know, if you put Jeb, George, and George Sr together, you could have the Bush Brothers, a modern day version of the Marx Brothers.

Bush Condoms?!? Oh yeah, I would trust those. I bet it's safer to have unprotected sex! Once again, my side hurts from laughing!