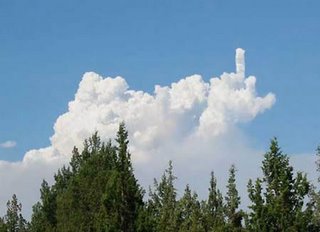 All I wanted to do when I got home was to park myself in that recliner. I wanted some peace of ass. I wanted to sit in peace on my ass. I ached from head to toe. It appeared that one of those bugs going around finally got to me.

I had been keeping a couple of steps ahead of these bugs for a week or two. There must have been a banana peel in my path. When I saw that cloud formation, I should have realized my healthy days were numbered.

Only two days before I had been out in a rain storm. We were thankful it wasn't snow in our area. By the time the day was over, I was soaked to the bone. It was that day that I attribute to being sick. It has been lingering with me for over a week now.

As a result of not feeling exactly chipper, I haven't done much blog reading. That means I'll have a lot o 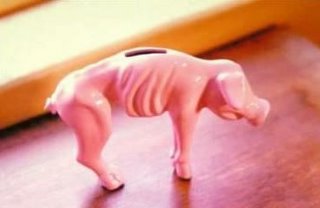 f catching up to do. Last night I went to sleep at 10 PM! That was the first time I'm gone to bed before midnight in years. I had already left a message on my boss' voice-mail I would be staying home. I guess my body needed the sleep. I didn't wake up until 11 AM!

I stocked up on a variety of cold medicines; cough syrups, cold and flu capsules, Thera-flu, Con Tac, etc. The combination of the medical expenditures and filling up my gas tank the day before left my piggy bank looking rather sickly. It was a couple of days before payday, then and only then will he get some sustenance.

Try as I may, I have been unable to come up with anything remotely humorous, it seems the cold/flu has dampened my creativity. So I am left more than ever to try to generate a giggle or two from some harvested pictures and cartoons. I'm afraid originality is currently in sho 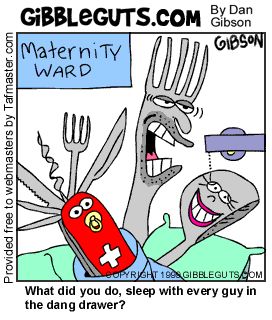 I suppose I could throw in joke:

Two old ladies were standing outside the nursing home where they lived. They were having a cigarette and sharing gossip. Just then it started to rain. One of them pulls out a condom, and after opening the pack ships off the end of it. Next she slips it over her cigarrete and resumes smoking. ....The second lady says, "What's that?"
....The first lady replies, "It's a condom, it keeps my cigarettes from getting wet in the rain."
...."Where did you get it?"
...."You can get them down at the drugstore."
....The next day the lady hobbles into town to the drug store and announced to the Pharmacist, she wanted a box of condoms. The man, a little embarassed looks at her strangely - the woman was in her 80's. Deciding it was none of his business, he asks of her, "What brand do you prefer?"
...."It doesn't matter son, as long as it fits a camel."
....The Pharmacist fainted.

Well, the meds are kicking in again. I'll turn in for now. Hopefully my sense of humor will have returned by the morrow. Perhaps I will have had all the peace of ass that I need.

No.491
Curmudgeon responsible for this post: Hale McKay at 10:02 PM

Sorry to hear you're not feeling well. I'm sure you'll be getting lots of advice for a quick recovery, so I'll start. I eat a clove of garlic and a BIG glass of orange juice every morning when I'm not feeling good. Of course it won't cure you, but it will get you feeling better in shorter time.
Feel better soon.

We're on the same schedule: I am rarely in bed before midnight (it's usually 1am), and usually up by 7am). I just love the night hours. Kick that bug in the ass and get back to blog, mate!

I'd say your sense of humor is intact. When you get off the meds and re-read this, you'll laugh as hard as I did.

Tee hee. Caught you again. Hoss had that joke two months ago. (Wait till you see my tomorrow effort. Got joke in there that's at least two YEARS old.)

Poor baby! I'm sorry you've been unwell. I hope by now you're back in tip-top form! *hug*