The Rules Are, There Are No Rules 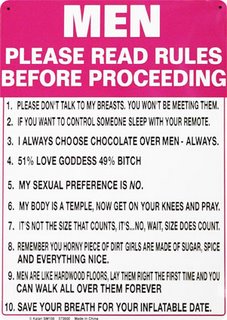 Someone once asked me why I didn't post something funny about men from a woman's point of view? That someone was quite convincing. So I ventured into cyberspace to harvest some anti-men graphics. Then I culled through them and came up with the seven images found on this post. So under duress (that someone is standing behind me) I am cheerfully submitting to her request.

....She insists that we men need to follow a few sets of rules, like those at the left. She reminded me that women know what is on the minds of men most of the time. They don't always realize that there is a time and a place for e

....She suggested that I should show how sometimes a dog is a better companion for a woman than a man. She said that in some ways a man is a dog, especially when he wants sex. Exposing himself when she is sitting on the toilet is not a very promising way to turn on a woman. Fondling her breasts when she is dicing onions is not a very good idea. 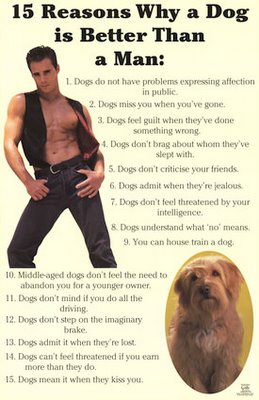 She added with a grin, that dogs can lick their own privates. (Private thought of author: Yes, but not as good!)

She reminded me that beer makes men drunk. We have to keep getting up for the bathroom. It creates foul odors when we break wind. A

t first, we get amorous, but then we fall asleep. We are useless the next morning. Then she said to me, "Can your beer do this?"

She stopped, lest I got any ideas other than posting this blog. (Private thought of author: If it could, it wouldn't stop.) She commented that she wished she looked as good as that picture. I said in return, "You always look good to me." (You don't think I was going to touch any comparisons, do you?)

Then she said that men should learn a few things about what to do and not to do in the bedroom. (Uh oh, I thought. Here comes the performance review.)

She said she wasn't going to get into techniques and satisfaction - at least not at that particular moment. She said that men need to know how to talk to their women in bed. As important as saying the right things, avoiding saying the wrong things co 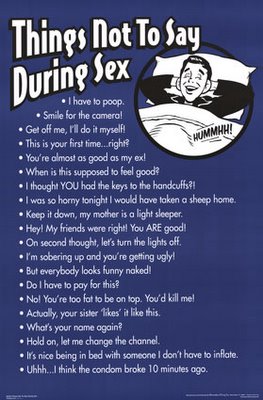 As the image popped up over there on the right, I felt a measure of relief. I was innocent of every single one of those things. Whew! She agreed, but added that I seldom talk at all. (I chose not to cite that she has little to say during the act herself.)

I said to her that not all men are like this. She agreed, but there was also a difference in some cases. Single men don't have to worry about being banished to the couch, especially those living in their parent's basements.

She was quick to remind me that even married men could learn a thing or two from this blog. (Private thought: Swell! People have been known to shoot the messenger!)

She reminded me that women do talk amongst themselves - about their boyfriends and husbands. Guys, I don't know about you, but I'm not so sure I want to hear this. She is quick to add that men also discuss their girl friends and wives with other guys. Anyone want to lay odds on whether the discussions of their significant others' stories match? "This is bitch, my girlfriend." "What a coincidence! My girfriend's a bitch!"

I have a confession to make here. My wife is not really standing by while I am posting this. She did make the suggestion, however. As such, I chose to use her as an imaginary overseer to give her credit for the idea. If she has any problem with this this posting at all, it would most certainly be the picture and suggestion behind "Can your beer do this?"

Even after all of our years (33 in May) of marriage, she still maintains a certain amount of modesty. If there is any over exposure at all in our home, it would my swinging medallion and baubles that would be visible.

When push comes to shove though, guys we must always remember to be nice in your older years. While there is evidence of male menopause, it pales, man 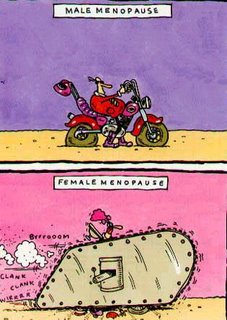 does it pale, to the changes a woman goes through.

I did admit to her that I would have to put together a counter posting to this one. After all, all is fair in sex and blogging.

She said I wouldn't be able to one together that would be as funny as this one. I had to remind her that it was a simple matter of perspective. More women will find this funny than men. A post of how men see women would be funnier to men than it would be for women.

She shrugged and reiterated that it still wouldn't be as good as this one. There you have it. The challenged has been issued.

No.512
Curmudgeon responsible for this post: Hale McKay at 4:06 PM

On the instructions of my wife, I try NOT to think. It just gets me in trouble. I think.

Well, this wasn't funny at all, so go for it.

When you posted on my blog, you said you hadn't lied on a blog before... and now you come up with this... HUH? My beer can't do that... but after enough of them ~ they all start to look like her!~ jb///

"Exposing himself when she is sitting on the toilet"- Hahaha, my husband does this too!
"Fondling her breasts when she is dicing onions"- Oh and don't forget grinding on her hiney while she's bent over the oven! LMFAO

I thought this was quite entertaining. Even shared it with a few friends. I have to agree with your wife that a counter post would probably not be as funny but I say give it a go and let's find out. :)