Not Another Brokeback Mountain Joke! 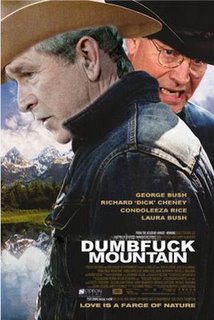 Broke His Back Mountin'
It was a book that they said couldn't be made into a movie. They said that "The World According To Garp" couldn't be made into a movie either. They were right on both counts! "Garp" featured a clown heading the marquee, and this film is no different.
....It's the story of a man born into this world with a platinum spoon in his mouth. This explains the strange speech impediment, a cross between a Texas drawl and the nasally driveling of Fran Drescher. He was once the poster child for "Hooked on Phonics."
Although he was born into a family of pacifists, young Dubya like to play war games with G.I. Joe action figures. He used brother Jeb's Barbie and Ken dolls and drafted them into his imaginary elite army. He reveled in the mayhem of what blasting caps could do to the dolls while envisioning his soldiers under mortar attack. He staged massive invasions of countries that threatened world peace and his view of what he thought the wo 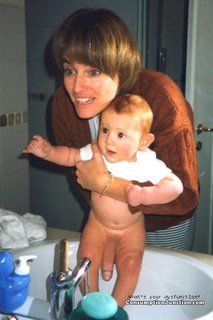 rld should be.
Even as an infant, family and friends were struck with the realization of what kind of man he would become. As word spread of his unique qualities, there was a backlog of young women volunteering to babysit the young Bush baby. His mother once noted that his diapers had been changed twelve times in a two hour period.
Years later he found a young woman his age who loved changing his diapers, even after they got married. By then he was a young impressionable man who'd never worked a day in his life for a paycheck. He stood by jealously as his father became President of the United States. He vowed the day of his father's innauguration, that he would follow in his father's footsteps and that he too would be someday become the Commander-in-Chief. His experience with those G.I. Joes would someday pay dividends.
For inspiration he hung a poster of his father on the wall above his bed. The words on that poster would shape him, and make him a greater man than his Daddy. He would, from that day forward, be driven by that resolve. He swore that someday he would be able to p 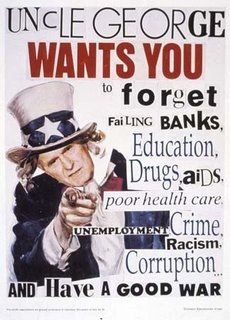 ronounce "nuclear." It is said that he broke his back mountin' the challenge to succeed no matter how ambiguous and mundane his abilities to deliver a speech.
The rest is history. He is now the Commander-in-Chief. He has invaded a country he perceived to be a threat to America. Where his father failed to get Saddam Hussein, he succeeded. Where his father managed to go to war with minimal loss of life, Dubya is rolling up the numbers. In more ways than one, he is succeeding in being greater than his Daddy.
From the book there is an account of a day of leisure in the President's busy schedule. What follows is an excerpt of a trip to Boston, Massachusetts.
Play Ball!
George and Laura Bush are at the Boston Red Sox' home opener ; sitting in the first row, with the Secret Service people directly behind them. One of the Secret Service guys leans forward and whispers something to Dubya. At first, the President stares at the guy, looks at Laura, looks back at the agent, and shakes his head "no". The agent then says, "Mr. President, it was a unanimous request of the entire team, from the owner of the team to the bat boy." George hesitates... but then begins to change his mind when the agent tells him the fans would love it! He reminds Dubya of his sinking popularity numbers and a public appearance could help him. Bush shrugs his shoulders and says, "Oh-Kay! If that is what the people want. C'mere Laura, baby..." With that, he gets up, grabs his wife by her collar and the seat of her pants, lifts her up, and tosses her right over the wall onto the field. She lands face first into the dirt near first base. She gets up kicking, swearing and screaming, "George, you "!^$#@&!" The crowd goes absolutely wild. Fans are jumping up and down, cheering, hooting and hollering, and high-fiving. Dubya is bowing, smiling and waving to the crowd. He leans over to the agent and says, "How about that! I would have never believed how much everyone would enjoy that!" Noticing the agent has gone totally pale, he asks what is wrong. The agent replies, "Sir, I said they want you to throw out the first Pitch .."
What The Bleep With The Veep?
The relationship between him and his Vice President, Dick "Shotgun" Cheney, makes one wonder if the latter may have been one of his baby sitters years earlier. Because of his connections with Haliburton, Cheney used his influence to reach ou 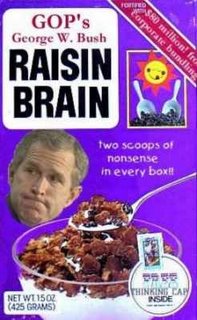 t to another conglomerate to produce a breakfast product bearing the image of the President. He figured if Americans could wake up to face a Bush in the morning, they could live with, sleep with and eat bush the rest of the day. Kelloggs board agreed to produce the cereal, but they rejected his slogan. They settled instead for "Two Scoops of Nonsense in Every Box."
There you have it, a brief synopsis of the book and the film. From where this critic is sitting, both are redundant. The characters are as one-dimensional on paper and film as they are in real life. Read the newspapers, watch the news and listen to the debates amoung your friends and co-workers if you really want to know how many scoops Dubya is going to lay on us.
Help keep the book off the Best Sellers List. Rent Ishtar or Gigli, but don't see this movie!
No.570
Curmudgeon responsible for this post: Hale McKay at 12:51 AM

Mike, ya need to write the book, you'd become a millionaire!!

Don't forget I'll need your expertise at my place tomorrow for launch of MONDAY MEME!!

Where do you find this stuff? You crack me up. I love dumbfuck mountain!!! Too hilarious!

Gee, I feel sorry for Dubya. He's just trying to do his best -- hopin' he's got enough people left to invade Canada.

Better let dubbya know that now would be a good time to invade Canada, all their athletes and most folk with money are over here at the Commonwealth Games at present, only leaves a few Mounties for defence.

Where do you find these piccies? Hey, I dare ya to send this post to Dubbya. I Dubbya dang dare ya!

That's a fabulous "Uncle George" poster - I want one of my own!!!

Ummm I loved the infant picture *Giggle*.. The raisin Bran one was funny too =P

If there's an amazing picture out there on the web, you'll find it, Mike. Where'd you find the one of a young Harry Reams? :)