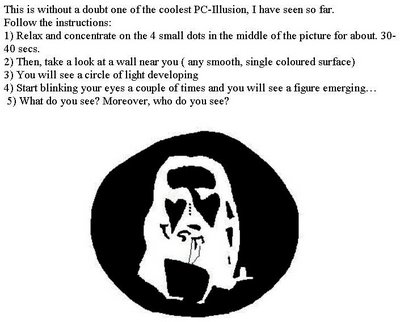 I found myself spellbound by the optical illusion above. I received it in an e-mail from my brother-in-law today.
....It doesn't fit any particular theme of anything I would normally post, and rather than leave it by itself on a post, I have added an embarrassing anecdote.

Clothes Make The Man
After my wife and I had been married for about six months, one of our weekend rituals was to spend Sunday mornings at the landromat. (When we finally got our first washer and dryer, it was cause to celebrate.) Together, we would gather up the week's diry laundry and throw it in the trunk of the car. On route we would stop at a convenience store and pick up the Sunday paper and a few things we might have needed at the house.
....Once the loads of clothing, usually three machines worth were going, we would settle down in those very uncomfortable vinyl chairs and share the paper. We also passed the time by watching the cast of characters that came and went while we were there. This "people-watching" would supply us with conversation later back at the house.
....Wife: " Did you see that man wearing the shorts and sandals with socks?"
....Me: " Yes, and did you notice the socks were different colors?"
....Wife: (Laughing) "Oh, you saw that too?" I nodded and chuckled myself.
....Wife: "I'll bet you noticed that blonde with the big boobs."
....Me: (I did, but wasn't wanting to breech that topic.) "Uh ... I remember a blonde, but I didn't really pay attention to her."
....Wife: "She was wearing a tube top! You couldn't miss her." (Of course, she didn't believe me.) "Everytime she folded a towel or a blouse the tube top kept falling down. Her boobs kept falling out."
....Me: "You're kidding! I missed that?" (Did I mention that she didn't believe me?)
....Anyway, on one particular Sunday, I was alone at the laundromat. (Back then, I was a lot more helpful with domestic chores than I am today.) I had been folding and separating the clothing in different stacks on the counter, when a young woman began doing the same thing nearby. (I swear that I didn't even notice that she had the same attributes as the aforementioned blonde.)
...."Look," she said to me. "Someone must have forgotten a shirt when they were here." She picked up the folded garment and shook until it was unfolded. "Yuck! This is the ugliest shirt I have ever seen!"
....I looked in her direction. (Somehow, I failed to notice that her blouse was open down to her waist and tied near her exposed navel. I'm sure my wife would have noticed that from the perspective of my side view, her entire bare right breast was quite visible.)
....I said, "I'm sure they'll be back for it when they realize it is missing."
...."I doubt it," she said and tossed it onto the table between our piles of folded laundry. "I feel sorry for the idiot that would wear something like that."
...."Yeah, me too," I said. I was folding the last two pieces of clothing and would soon be leaving. We were the only two people there at that moment, and I decided it was best that any further conversation was not needed.
....Finally, everything piled in the laundry basket I headed for the door. I glanced back at the woman as I passed through the door out to the sidewalk. (I'm relatively certain that like me, she didn't realize that her blouse had come untied. She would've quickly covered herself had she realized that both of her boobs, glistening with perspiration from the hot laundromat, were on magnificent display. I felt safe in saying to myself, she didn't have to be embarrassed that I might have witnessed the show.)
....As I was loading the basket into the car, I shook my head. That shirt wasn't that ugly, was it?
....I shoved it under the top piece of laundry. After all, it was my favorite shirt. (My wife was a little curious as to why I was a little randy when I returned home.)
How about that illusion above? Did it work for you? What did you see?
No.668
Curmudgeon responsible for this post: Hale McKay at 12:32 AM

When I first looked at the illusino, I saw Jesus. When I stared at it and then stared at a blank page, I could see nothing. I need new bificals.

With adventures like that, I'm surprised you EVER bought a washer and dryer!

Just which illusion and vision are we speaking ofMike? yeah I saw the jesus image, how do they do that?

I saw the Jesus image before I even started staring at it. Pretty cool, though.

I want to see the t-shirt. You don't still have it, do you?

And, btw, what laudromat did you go to anyway? We never had any good-looking people in ours, just sweaty ones.

Laundromats ARE good places for people (freak) watching. I'll die if I ever have to use one again!

I have this optical illusion stored in the My Pictures section, wondering how to use it. See, most people are going to say they saw "Jesus" -- except how do they know, since there weren't any photographers around? I just haven't figured out how not to befuddle people, like you have. Heh.

Dumb blond? I don't think so. She had your undivided attention didn't she? Besides you denied your favorite shirt.

I guess I didn't concentrate hard enough. I never quite clearly could make out what I saw on the wall. Oh wait, maybe I should remove my sunglasses

Weird - it worked really well for me.

I saw what we typically acknowledge that Jesus probably looked like (HA! Take that, Hoss!) lol

Now I'm seeing that negative image on the back of my eyelids every time I blink.

Thanks for stopping by my blog-I just had to comment here since you mentioned socks and sandles :)

That was a laundromat experience unlike any I have ever had before!!