Until Death Do Us Unite 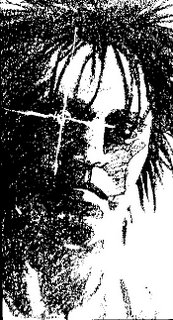 Jim Cash was about to have a very bad day. If it wasn't bad enough that he'd been gunned down during a drug bust, his wounds had been mortal. He'd died.
....Cash was having one weird dream. There was a hazy almost spectral glow about the scene before him. If he hadn't known better, he'd have sworn that he was looking down upon himself. There was movement by others who were gathered over the still form.
....His attention was drawn to a machine which was emitting a steady chirping sound. Curiously, the pace of the sounds seemed to be slowing down, growing less intermittent with each passing moment.
....When one of the men ordered everyone to stand clear, he was painfully aware of what was happening. He felt no emotion. It was if it was the natural order of things. He realized that he was at peace with himself, even as the machine suddenly changed pitch before finally giving out a baleful unfaltering drone.

Death, as he'd visualized it, was a sleep that lasted forever. Existence and awareness would cease once that sleep began. In life his existence had been a given. It had been taken for granted. Life too was just the natural order of things. Death was an exclamation point on the sentence of life.
....In death he'd found he was aware of his existence, such as it had been, even as he was making the transition between the two. Yet his current state felt like an existence, although it was one of nothingness. He was feeling perplexed, confounded that he was able to be aware of anything.
....The people below were leaving, letting him lie there, floating there. He no longer wished to be there, wherever there was. He longed to return to that shell which had housed his very soul for so many years. He willed himself to fall and to plunge into the lifeless cadaver.

It was no longer the friendly confines that had once supported him in life. It was a desolate tomb, cold and lifeless. He was no longer welcome there. Abruptly he was cast into space like so much ejecta from an exploding bomb. He felt he'd been rent asunder. He watched with casual interest as fragments of himself joined with him and began to coalesce into a gossamer semblance of a body.
....He was adrift, hovering over a city that he'd once called home. Cash couldn't tell whether he was seeing, sensing or was just a part of the ethereal plane in which he was suspended. From his perspective the images were not unlike viewing some 3-D medium without the aid of the special glasses.
....He wondered if this was an out-of-body experience. Or was it life after death? Was it his fate to drift aimlessly among the living? Perhaps it was a state of purgatory, and if not, then it was surely his own private hell! For as long he could remember, he'd never thought that he'd ever see pearly gates anyway. Besides, he'd been certain that everyone in the attic would be total strangers to him. He'd always figured that he'd eventually meet up with his old friends in the basement.
....Suddenly he was falling at an alarming speed. The earth was rushing up to meet him. He anticipated that the ground would be opening into a consuming abyss. He was going to join those friends.

He tensed for the impending collision with the earth. Would he feel pain? He was certain he'd be reduced to pulp. Could he die twice? A calmness then came over him.....He was without form, nothing but an entity without a body. That body lay inert in a coroner's drawer, identified by only a tag attached to one of its toes. A massive chest wound marked the spot where a heart had once coursed life- giving blood through its veins. It was from that gaping wound that he'd been released.

....The earth suddenly veered away from his hurtling trajectory. It took a moment for him to gather his senses. The earth hadn't moved, but rather he had changed directions. He was now flying parallel to a busy street. Only the blurred passing of objects around him gave him any indication that he was moving at all.
....In an instant he was inexplicably hovering motionless. In front of him, leaning against a mailbox was a man in a grey suit. Unaware that he as being watched the man was cupping a match in his hand attempting to light a cigarette. There was something vaguely familiar about that man.
Warmth came over him. There was a sudden rush of blood. He could feel a heart beating. There was an acrid taste of nicotine in his mouth. The man and he coughed in unison. Cash had never smoked, but Detective Johnson was a chain-smoker.
....It was becoming clear to him. He was in the man's body. Somehow he had entered the man and was sharing his body. Johnson's breathing was his breathing. Johnson's arthritic knees were causing pain that Cash could also feel. However, it was the man's thoughts that he was finding most interesting. He knew this man. They had been partners at the 87th precinct for ten years.
....As the man's thoughts became his, so did the man's memories. He was able to evoke anger through the emotions hidden deep within Johnson's subconscious mind. There was a sudden chill of fear that entered into the man's thoughts. Cash had always known Johnson to be a fearless, sometimes emotionless cop. Perhaps it was guilt that was driving him.
....Somehow the man acted without thought. The bus driver had no time to avoid the man who had suddenly stepped into his path. The pain they were sharing was unbearable, but Cash tried to maintain his possession of the man's body. Like the dying man, he was losing his grasp upon life.
...."Cash, let it go. It's bigger than the two of us," Johnson said with his last breath.
....There was a sudden rush of chilled air. There was no breathing. The heart had stopped. Cash was once again outside of a body and looking down upon it. Lifeless eyes were staring up at him. He felt no remorse. Indeed there was a sense that justice had prevailed.
....He tried to digest what had just transpired. Johnson had somehow sensed that Cash had been there with him. Did he realize that he was actually inside of him? The only explanation had to be that their thoughts had merged, become one. Outside of the man's body he could not feel emotions. When he had been absorbing the man's thoughts and memories he had discovered that he had been set up. He had been taken out by his fellow police officers and his partner had been involved.
Drawn downtown, Cash decided that the answers to the many questions forming in his mind must be at the precinct. Why had his brethren officers shot him? Were they crooked and he'd found out about their actions? He tried to focus on the memories he had drawn from Johnson. The memories were becoming blurred. He was forgetting everything.
....His motion began to slow. It was as if he was succumbing to sleep. He was tired and weakening. If a disembodied soul was capable of losing consciousness, it must have been happening to him at that moment. He found himself driven with an urgency to survive. He wasn't sure how he knew, but he knew he was about to slip into oblivion. He had to find someone....
....The wino tapped on the empty bottle of spirits to dislodge any of the precious droplets that might have been clinging to the inside. Abruptly he bolted upright. His eyes widened and he began to tremble. He tried to get to his feet to flee from that dark alley. He could only manage to crawl up the base of an overflowing dumpster. Willie the wino had felt him the moment Cash had invaded his body.
....The feel of the alcohol soaked blood and tissue was vile and yet it was nurturing. He began to siphon what he could of the fragmented thoughts of the man. The process was not unlike peering into a brain from behind the owner's eyes, and reading the thoughts as if they were written words. What he was reading this time was disturbing.
....The man's body was wracked with terrible pain. There was a brief fluttering within his heart before it stopped. The presence within him was too much to bear. Once again, at the exact moment of death, Cash was looking down at a body.
....The man had been an eye-witness at a recent shooting. This man had seen Cash's execution, and now Cash had killed him.
To be continued...
No.712
Curmudgeon responsible for this post: Hale McKay at 8:31 PM

Labels: *Until Death Do Us Unite

You do write some fantastic stories.

I can hardly wait for the next installment.

I can only hope that there's not going to be a part with Demi Moore and a potter's wheel! (Just kidding, of course!)...

The body switching reminds me of that film "Fallen", except the guy doing the switcheroo was evil in that...

Can't wait to see how it turns out...

Take care out there and keep up the great writing!

So far so good...this is my kind of story. I love suspense.

I'd forgotten that Movie, "The Fallen," Zambo.
...Actually I think in the back of my mind, I might have "borrowed" Cash from a DC comics character.
Do you remember: Deadman?

FANTASTIC!!wonderful writing.. placing the reader into the character and the story.
I love it!
tc