The Elderly Say The Darnedest Things 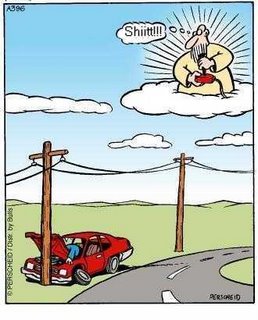 One of the rewards of working with the elderly is that I often walk away with some wonderful anecdotes. This afternoon was no exception.

"I don't believe in prestidigitation," said one lady sitting next to another. "That's a lot of hogwash!"
....Over the years, I have learned to tune my ears like radar when I am in close proximity to elders locked in animated conversations. I don't consider it to be eavesdropping because they tend to talk loudly because of their hearing problems.
....Another reward is that despite my age, fifty-eight, I am considered a youngster in their eyes. It's all relative, I suppose, depending in whose shoes you walk.
...."Young man," the lady said pointing to me, "You don't believe in that stuff, do you?"
....Not knowing how their discussion had begun or why they were debating that particular topic, I replied, "It's all sleight of hand. They can do some amazing things with cards and coins and such. But they're just tricks."
....Both she and the lady next to her looked at each other and then just stared blankly at me. I had that feeling that one gets when one dreams they are naked in a crowd of people, except I had awakened and it wasn't a dream after all! I became self conscious that maybe my fly was open. I didn't check to see, lest I make myself more conspicuous.
...."I didn't say anything about magicians, Sonny!"
....I'm sure you've seen those airline commercials where persons find themselves in embarrassing predicaments, and then the narrator says, "Wanna get away?" That's how I felt at that moment.
...."Agnes here says that our lives are written down in a book up there on God's desk. She thinks that everything we will ever do is already recorded in His "daily planner."
...."Oh," I said to her, "You mean predestination?"
....If she noticed that I had corrected her use of the wrong word, she didn't let on to the fact. "Of course!" she answered. 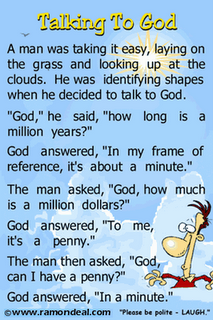 I can say the darnedest things too!

I felt myself getting into a bit of an ornery mood. "No, I don't believe that everything we do has been preordained. But I do think we are being controlled up there. I don't think we really have much freedom of choice. He is moving us around like pawns on a huge chess board."
....They say a picture is worth a thousand words. If that's true, you should have seen the astonished look on this poor woman's face.
....I didn't give her a chance to respond right away. "Well, maybe it's not a chess game He's playing. He's probably up there with the latest technology. I'll bet He's playing a video game, like Nintendo or X-Box. He's moving us around with a joystick!"
....She shook her head, got up from the chair and said to me, "You'll be punished for that disrespect, Sonny. I'm going upstairs to get my Rosary beads and pray for you. You should know that good Christians can talk to God."
....As she ambled off across the lobby to the elevator, I noticed that the other lady who had been sitting quietly the whole time had been joined by three other ladies and a gentleman. They were either giggling or were trying to stifle the laughter they were feeling.
....It was then that I received my very first "high-five" from a ninety-year-old man. "Son, you done good," he said. "That's the first time anybody ever shut her up for more than five minutes. She thinks she knows everything about everything!"
....Finally Agnes spoke up, "Be prepared, young man. The next time she sees you, she's going to be loaded with Bible scriptures."
...."I guess I'll have to be ready with a few of my own, eh?" I said.
...."You know the Bible? That's good," said the old man. "Which ones might you use?"
...."Well, I could mention that the Bible has a scripture that deals with letting teenagers use the family car." I had a captive audience, and they were anticipating the verse. "It's a well known one: Spare the (hot)rod, spoil the child."
....I smiled at Agnes as she began to giggle again. "Wait! I have a better one. Did you know that the Bible teaches us about football?" I felt a bit like a stand-up comic at the Improv. "The verse says: There were (NY) giants in those days."
....Now I probably would've been booed and heckled had I been laying those groaners on an audience at the Improv, but there in the lobby of a senior citizens apartment building, I was a hit!
....I guess you had to be there!

I fear Mike, that you may have just entered the preliminary stage and you should practice some precaution as you have dared to challenge a preceptor in her own precinct there has been no precedent for this premise and you will have raised her predatory instincts to a level where she presumes you will predecease her this predicament has come about by your precocious attitude the predominant precaution to prevent further trouble would be to prevail to her presumed better side pull back from the precipice at the precise time to ease the predicament and allow her to regain some prestige better to prevaricate and survive than persist with a predilection for a pre-emptive presence.

I believe this may well qualify as the longest run-on sentence in all bloggdom. (or is that presumptuous of me?)

and did you knwo that balaam has the most elastic skin in the bible?

You may be going to hell Mikey.
That's okay, I'll save you one of the good seats.

Peter, in a word, yes. LMAO

I only wish I could have been there. Situational humor is some of the very best kind.

My dear mother-in-law is in a full-blown state of dementia. Which is too bad. However, there are occasional signs of her sense of humor.

I fear that that dear lady will take it as more blasphemy if you continue on your wanton ways of disregarding the good book's words of wisdom. lol

You just gotta love those folks. After all, they are a precursor for our own lives.

Hmm...the Bible story that comes to my mind is David and Goliath. You went where all those poor old people feared to tread, and became their unlikely hero by finally shutting her up.

BTW, you should tell your wife that there's no such thing as too much blue cheese. Ever. :D

Good post, but you better be ready for the next meeting. (grin)

Sounds funny to me. And I'm not THAT much older than you!

Thanks for the laughs. I'm "getting there" myself. Of course, they do say that the older you get, the more you can get away with saying whatever slips out of your mouth. LOL.

Good job! But she'll be ready for you next time. Maybe you should lay low for a few days.

thanks for the visit., glad you liked what you saw. you're more than welcome to add me to your blogroll.

guess, if we live long enough, we can all say, "there by the grace of God, go I."

Peter, as a precursor to my presumptuous precis in response to your preamble in the comments of the previous posting, I predetermined that I had better prearrange the precession of pregnable thoughts predominant in my head, and in order not to be precatory or predacious in light of your preciosity, I put on prescription glasses for a pre-existing presbyopia which prevents reading prefatorials beyond a preset distance, thus I was able to make prelatic prelibations and prescind myself from the preconscious preconceived precursory that preempted comments from others.

No. I refuse to enter the "Pr" contest! I'd be jumping, unarmed, into a battle of wits.

But I WILL add this to your knowledge of Bible trivia:

Q: Who was the shortest man in the Bible?
A: Bildad the Shuhite. (He's in the book of Job.)

Q; Who was the SECOND-shortest man in the Bible?
A. Knee-High Miah. (He wrote the book bearing his name, Nehemiah.)

There's one I can't remember too. Something about motorbikes and roaring in the desert; if it comes to me, I'll be back.
Wait, Triumph, you could hear the roar of his triumph ... work on it