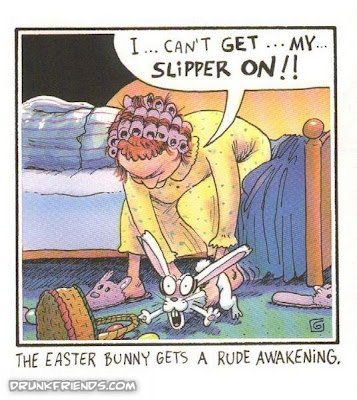 An unfortunate accident has forced Hallmark Cards, to considering shutting down its wholly owned subsidiary Easter, pending the hiring of a replacement Easter bunny.

Peter Cottontail, aka the Easter Bunny, has been diagnosed as having contracted "toe-main" poisoning. Cottontail, 35, and the father of 467 offspring, is expected to be sidelined for six months.

Frantic executives at Hallmark have been interviewing candidates for the last several weeks. While there have been many applicants, none to date have impressed the director of "Lepus Resources."

Roger Rabbit seemed to be interested in the job, but in the end bowed to the wishes of his wife Jessica. Disappointed with his decision, the CEO said that under the circumstances he would have probably done the same thing. Bugs Bunny was unavailable due to contractual arrangements with Warner Brothers.

Crusader Rabbit, an original Hannah-Barberra employee, was turned away over fears of an Easter Bunny hopping around some neighborhood wielding a jousting lance.

One Easter Bunny wannabe who showed promise with his cost effective method of producing brightly colored eggs, was finally rejected. Health officials were concerned about the edibility of his products.

Some of those trying out for the position, just seemed to have no clue. This was in evidence when one displayed his prowess at the traditional egg hiding trials. 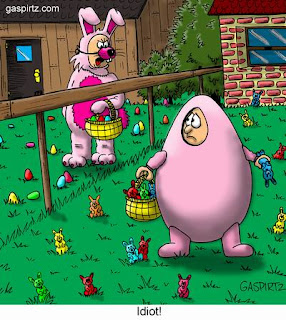 The field coach said, "He'll never be accused of putting all of his eggs in one basket!"

Although he was not hired, there was one rabbit who raised a few eyebrows. Despite the fact they couldn't actually see him, they felt sorry for him as left the offices dejected. He had been out of work for quite sometime since he had starred with Jimmy Stewart in " Harvey. " Officials just couldn't see the value in a six-foot invisible Easter Bunny.

Risking the possibility of damaging foreign relations with the island nation of Lilliput, the National Guard had to be called in when one applicant who had been rejected went postal on the grounds outside of Hallmark's headquarters.

While ultimately not hired to fill the opening of Easter Bunny, one particular rabbit impressed everyone with his unique method of delivery of his Easter treats. 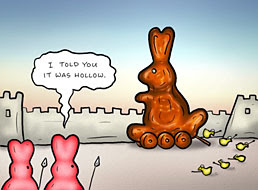 Lepus Resources felt that a Trojan Bunny was not exactly what they needed.

During the interview process, a right-wing group staged a protest march against Hallmark and Easter. The group decried the powerful entities for limiting the job opening to only rabbits. Among the contingent, an Australian demanded that a kangaroo be hired to fill the position. "Stuff those kids with sweets and they'll never know the difference," he was yelling.

Prominent among the protesters were even a pair of rabbits who claimed that Hallmark and Easter were exploiting rabbits by using them in demeaning ways to fatten their coffers.

In an act that appalled even the other protesters, one rabbit and a chicken performed a sexual act near the entrance to the Hallmark building.

By the end of the day on the Wednesday before Easter, a limousine with a police escort pulled into the driveway. Out hopped Peter Cottontail, looking none the worse from his ordeal. He had made a complete recovery from the brutal assault, the facts of which had not been detailed by company officials. 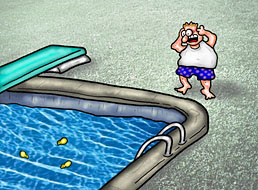 The employees rejoiced and the accountants smiled greedily - Easter was saved! There was only one more reported incident, but it was discounted as a practical joke. Some joker had dumped a package of Peeps into the swimming pool.

" Who Peeped in the Pool ? " Read the headlines of the next day's paper.

No.944
Curmudgeon responsible for this post: Hale McKay at 8:44 PM

Well, this is a fine how do you do -- no Easter Bunny?! I hope they find a replacement in time. This is hysterical.:)

Oh my goodness, this is post is a riot!

I hope your week is going well =0)

You just CRACK ME UP! LOL. Happy Easter!

I thought we were going to have to hire the politically correct Easter Bunny cousin, Spring Bunny.

HaHa The Chicken And Da Rabit Were SoOoOo Funny!