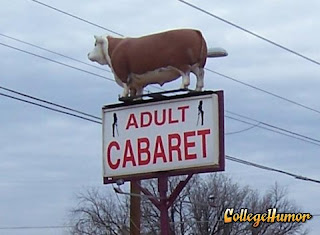 Politicos everywhere had their eyes on Cow New Hampshire Tuesday 1/8/08.

Pundits and political reporters almost doubled the state's median IQ today when they flocked to the Granite State to cover "the first in the nation primary." The quotient immediately returned to normal when the candidates and voters got out of bed.

Yes, I'm poking fun at Massachusetts' neighbors to the north. In the Bay State we have to make jokes in attempts to cover our own infallibility. After all, my state and its populace are still trying to apologize for unleashing the Kennedys upon an unsuspecting nation. I don't think we'll ever be forgiven. We once tried to trade Teddy to N.H. for a truckload of cow manure, but they turned us down.

By the way, do you know how to tell the difference between a moose and a New Hampshire housewife? Answer: Look for the red flannel shirt.

A New Hampshire Mensa Question: What kind of milk comes from a forgetful cow?
Answer: Milk of Amnesia!

Ah yes, the New Hampshire Primary ... People who make a living covering elections and all things political, (the burger flipper and lettuce washer positions at Micky Dees are at present filled) were all eager to find out if Barack Obama's victory in the Iowa caucuses would carry any weight with the N.H. voters. 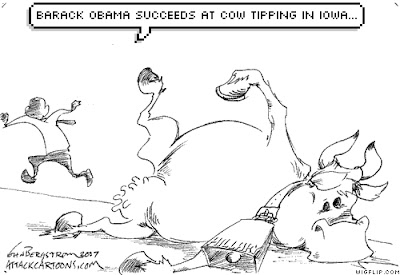 When all of the voters'X's (it's amazing how many people in New Hampshire are named "X") Hillary Rodham Clinton was declared the winner. It appears that her erstwhile ersatz tearful comments must have mooo-ved those people. 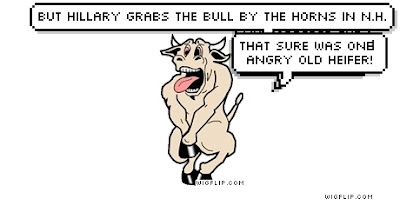 Two down - forty-eight to go!

It was thought that it wouldn't be until the day that pigs fly that New Hampshirites would vote for either a woman or a black man for President of the United States.

I guess there was no accounting for the day that cows fly!

Those in Hillary's camp are expected to party all night long. Pick-up trucks will circle local cow pastures for a good old fashioned game of cow chip tossing.

The festivities will be capped off with live demonstrations of the time-honored art of "cow tipping." Candidate Fred Thompson was giving a victory speech (before he was interrupted and informed he didn't win)that proved to be an effective insomniac to put the cows to sleep.

At a local tavern, named oddly enough "A Local Tavern," Hillary entertained her staff with an open bar and picked up the tab. Apparently the art of cow tipping was lost on her. Known for an incident last year when she did not leave a tip for a waitress, Clinton made amends when settling the $1298.88 bar tab by leaving a generous $1.12 tip! She isn't very skilled when it comes to "cow-tipping." 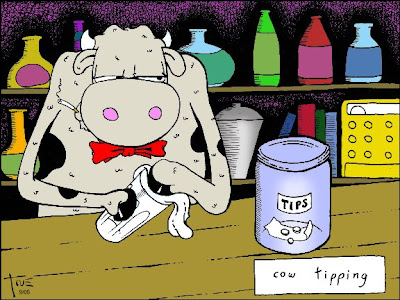 No.1223
Curmudgeon responsible for this post: Hale McKay at 9:45 PM

If the heart of the land and the old guard can't see the forest for the trees, then I suppose we are all doomed to spend the next 4 years on a downward slop.

Sorry, Hale, but having come from an agricultural background, I could have told you that a truckload of cow manure is worth waaaaaaaaaaaaaay more than Ted Kennedy. The deal was dung before it was offered.

Interesting story you got here. I'd like to read a bit more about this matter. Thanks for sharing this data.
Sexy Lady
London escorts