First there was the "man's face on Mars," and now the world is enthralled over the "man walking on Mars." PUH-LEASE! How long will this picture circulate before someone pulls out their rosary beads and sees an image of the Virgin Mary? Well, that ain't gonna happen. This is a closeup of the surface of the planet Mars. It isn't a grilled cheese sandwich or a potato chip!

Then what is it, if it isn't a man walking on Mars? I have to unequivocally rule out a walking man. I have decided to gather up some of the offerings that have been suggested at such venues as bingo games, quilting bees, gatherings at office water coolers, ladies' room lounges, Lions Club poker tables and chat rooms.

One group has claimed that the image is that of Uncle Martin, who after the cancellation of his television program returned to his home planet and now lives in seclusion in the desert regions of the Martian equator.
~That the group is TV Land executives using the photo to promote an up-coming "My Favorite Martian" marathon, is only coincidental.

The figure has also been conjectured to be J'onn J'onzz, the Martian

Manhunter. The former member of DC Comics' Justice League of America, was last said to be now be a part of Mars' soil, thus achieving immortality.
~Also a coincidence, DC Comics has approved a movie "The Justice League of America" set for a 2009 release in theaters. The group of super heroes will feature Wonder Woman, Superman, Batman, the Flash, Green Lantern, Aquaman and the Martian Manhunter.
~If the image on Mars happens to generate publicity for the film I'm sure the producers will have no complaints.

I feel safe in discounting a suggestion that it might be Warner Brothers' Marvin the Martian up there. Some doom and gloom UFO-ologists fear our planet is in serious danger.
~I'm not foreseeing an attack from Mars being masterminded by the little guy. He's not firing up his "Illudium PU-36 Explosive Space Modulator" to destroy Earth because it's blocking his view of the planet Venus.
~Even if he was planning the destruction of our planet, I have no doubt that Duck Dodgers would intervene and save the Earth.

You are probably aware that one of the many candidates making a run for the office of the President of the United States, Dennis Kucinich has recently dropped out of the race. I am convinced that the reason behind his decision lies solely with the Martian picture.
~You might recall that Kucinich has experience when it comes to the subject of UFOs. He has seen a UFO! Had he continued his bid for the Presidency, it would have only been a matter of time before he promised a Martian chicken in every pot!
~Well, Dennis had been very busy, as we should expect, studying and analyzing the photo image taken on the surface of Mars.
~Below is his enhanced interpretation of the image in question:

Furthermore, I will take this time to dismiss the other rumors and theories that are floating around out there. The figure is not Obi Wan Kenobi or one of the Sand People from the Star Wars films. It is not Amelia Earhardt stranded by the wreckage of her missing airplane. Some idiot, obviously wrong, proposed it is a picture of Tiger Woods lining up a difficult wedge shot out of a bunker. It is not, I repeat, it is not O.J. Simpson looking for the murderer of his wife!

As I stated above, I have ruled out the possibility that the image is that of man walking. Anyone should see clearly that it is a man sitting on some rocks!

~By using my state-of-the-art sophisticated and twisted imagination, I have solved the riddle of the image.

This breakthrough is appearing here on this blog exclusively. You readers are the first to be privileged to learn the truth!

Thought to be dead, his remains having never been found, the NASA cameras have unwittingly discovered the whereabouts of Jimmy Hoffa! He is alive and well and still controlling the Teamsters in absentia via satellite link through his son.

That revelation isn't the only surprise this Blog has for you readers!

There is another photograph that the NASA cameras captured on the surface of the Red Planet. For good reason they are hesitant to release it to the public.

This is another exclusive to be seen here first! Some of the scientists at NASA are still scratching their heads trying to figure out this strange rock formation.

One scientist was heard to be muttering, "It looks familiar. It looks like someplace I have been. But I have never been to Mars."
~Said a mission specialist, "Me too. I just can't put my finger on it. It's on the tip of my tongue."

Readers, I'll defer this one to your astute interpretations.
I received an e-mail from one of the residents of Mars, Marvin the Martian himself. Aware of NASA scientists' conundrum over the image, he sent the following message: 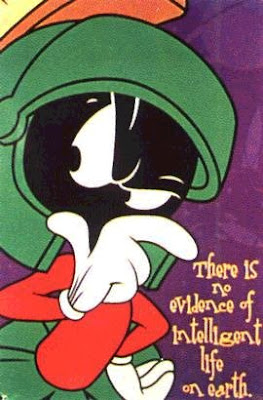 It's a good thing we haven't yet had a photograph-capable space probe visit Uranus; I don't think I wanna see what the photo interpretists come up with from there...

You did well with this post...nice shots and captions! I especially loved the hillside!

I thought the figure on Mars was the Little Mermaid. I'm amazed at the symmetry of that hill side. I was going to try to figure out what it was, but then I decided, screw it, maybe I'll come back later.

If it's not O.J. looking for the real killer, then I think it's a potato chip.

I like your article is fantastic, is really good written. Congratulation!!!. Do you want to see something more? Read it...Zeta Group, Great investment opportunity in Costa Rica: jaco bay. Visit us for more info at: http://www.zetaonline.com.

Man On Mars? By Using Adobe CS3 Photoshop you can Filter the picture and see for your self its been added very skillfully so sadly its fake, BUT NASA's original picture shows its already been heavily photo-shopped any way, rock formations not adding up static lines etc so something aint right with what their putting out.....,

Dead Man Walking" sportsbook is a song written by David Bowie and Reeves Gabrels and released as single from the 1997 album Earthling. It was a number 32 hit bet nfl in the UK.
The guitar riff used in the intro dates back to the mid-60s when Jimmy Page taught this to Bowie. Bowie later used it for his song "The http://www.enterbet.com Supermen" in 1972, and revived it 25 years later for "Dead Man Walking"