When You Wish Upon a Scimitar

I spent part of Saturday afternoon discussing solutions to this country's immigration problem with an 86-year-old man. Needless to say we didn't solve anything, but we did share some laughs and the man was able to vent his frustrations.

He owns a three-story six-family house in my town. He lives comfortably collecting rent from four of those apartments. By its very nature, being a landlord is fraught with problems. He has had more than his fair share of problems; with what else but his tenants?

The times have changed and not necessarily for the good either. Once a property owner could pick and choose who rented their apartments. If a landlord wished, he could refuse potential lessees with children and pets. It was his prerogative.

Nowadays, however, that topic has become a sensitive one due to the increasing rate of single parents. He learned from a previous experience that once an apartment is rented when kids are involved, it is next to impossible to evict the tenant. Even if the family is causing damage or not coming up with the monthly rent, he couldn't simply throw them out onto the street.

He said to me, "Those filthy sons-a-bitches are destroying my property. They throw their trash on the floor and leave it there. They don't even have a broom or a mop in their apartments."

He tossed a set of keys to me and said, "You don't believe me? The apartment above us - go take a look. They visit friends on the weekends, they're not there now."

When I opened the door to the apartment my olfactory senses were assaulted by the foul odors of rotting fruit and what smelled like feces. The floors were covered with so much trash that it was hard to imagine that there were beautiful hardwood floors beneath it all. Fruit flies were swarming around the kitchen sink and range.

These occupants apparently didn't like beds, for the one room that was the closest to resembling a bedroom had four bare stained mattresses spread about the floor. There was no evidence of sheets or blankets. There were head and foot boards leaning against a wall.

It was all I could do to keep from losing my lunch when I looked into the bathroom. It appeared that one or both of the occupants had been experiencing a continuous bout of diarrhea. Next to the toilet, still encased in its plastic wrapper was an unused toilet brush. I had seen enough, smelled enough and couldn't get out of the premises fast enough.

"Was I exaggerating?" he posed the moment I returned to his apartment. "They've only been there two months!"

I was still trying to hold my groceries down while replying, "Nope. If anything you may have been under-stating the condition of the place." I described a few details to him. 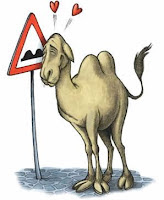 "I'm surprised those f**king Muslims haven't tried to smuggle a f**king camel up there," he said.

I chuckled and said, "Aha. That explains why they never removed the packaging from the toilet brush. They must think it's a toothbrush for a camel."

"I had two of them on the first floor last month. Do you know what one of them asked me?" I shook my head no. "They wanted to keep a goddamned goat out back!"

I tried not to laugh too hard, "Perhaps, they are having trouble finding dates!"

In a space of a half hour, I had never heard as many colorful adjectives used to modify the noun Muslim. It was obvious he didn't want anymore of their kind on his property anymore. His dilemma: it seemed they were only ones looking for places to live and the only ones with money to pay for the rent and to come up with security deposits. Oh yeah, if they refuse to rent to them? Then they will probably be sued by an American lawyer greedy enough to represent them.


He is not alone when it comes to these kinds of problems with tenants. It has gotten to the point that most people with apartments no longer advertise or list them with area real estate firms. Several of the Realtors have even stopped listing rentals.

I've come to the conclusion that we are not even close to winning the war on terrorism. The terrorists have gone underground here in this country. They are destroying American property under the guise of tenants. They have infiltrated us with the goal of bringing down America from within. Unwittingly perhaps, but they are being aided and abetted by the long misguided ACLU.

Here's an example of how even a labor union has lost sight of its purpose: No Labor Day in favor of a Muslim holiday.

This was a link I found over at The Silverbacks. Thanks Mushy for staying abreast of these crimes against Americans.

No.1426
Curmudgeon responsible for this post: Hale McKay at 7:18 PM

You are such an infidel, pointing out the obvious, Hale ;)

Just a few of the signs of things to come.

We love our country so much, or so we say, but why don't we speak up when we see it slipping away?

Touch
an
immigrant
on
his
toe

If he
hollars
make him pay
fifty dollars
every day.

Your anthem is a nice touch.

You're so right. It's happening right under our noses.

There's no pulling wool over my eyes - nor yours.