Tempted by the forbidden fruits of carnal desire, a young Jewish couple in the ancient Roman occupied city of Nazareth, were last seen about to do the dirty deed. The events leading up to this sinful game of hide-the-wienie are chronicled in the first installment of the story, the title bearing their names: Marty & Josephine.

The rays of the warm sun rising in the east played upon the naked bodies of the young couple. She was lying by the edge of the nearby river, an empty wine bottle clutched against her breast and another standing against that point where her legs met.

Josephine was the first to stir as dreamlike memories of the night before replayed in her mind. Her angel hovered over her, his lips and tongue playing homage to her neck, her breasts and below. What were those romantic words he uttered as he took her again and again? Oh yes, he said that "In all his years of fishing he had never used his rod at a better fishing hole." She felt the hardness of that which was touching her in that private spot. She wanted to pull it inside of her. She reached down to touch it.

The young man lie flat on his back in the back of a stolen chariot, a part of him standing like a flag-less flagpole to greet the new day. His breathing was uneven as he remembered feeling her tongue upon him. Her movements had been relentless, her moist tongue lapping and grazing every inch of him. He was beginning to awaken and he was pleased to feel her performing that same act. He could think of no better way to be aroused from sleep. He reached down to touch her hair and to hold her head in place.

They both awoke at the same instance and in unison they both cried out in shock. She at the riverbank bolted upright clutching an empty bottle. He pushed himself backward away from some shepherd's stray sheep which had apparently mistaken him for a salt lick.

Embarrassed by their predicaments the couple felt the need to cover their nakedness. Avoiding eye contact with the other they scrambled to find their clothing which had been thrown carelessly onto the ground the night before. They next found spots, out of each other's sight, to hastily don their clothing.

Finally they emerged from their hiding places now fully dressed and smiled in modest but nervous comfort at their respective lover. For a few moments they stared at the ground before looking at one another. Grins turned into smiles and giggles turned into hearty laughs.

Marty was the first to speak, "Say, what were you planning on doing with that bottle anyway?"

She didn't think he'd seen that and she glared at him, "Was that sheep an ex-girl friend of yours?"

She sat down next to him and gave him a gentle hug and a peck on the cheek. She purred, "I had a wonderful night, Angel. You sure know how to fish!" As she tried to visualize the night before she suddenly grew pale.

He placed his arm around her and said, "Me too. It was great! I remember I was out of breath trying to keep up with you." He too was wearing a worried look on his face as the events of the previous night became clearer.

Both of them remembered that he was struggling to open the condom package before he finally tore the foil down one side. They were giggling as she playfully read the directions on the back of the package. "Place the condom on the head and pull down until it is fully unrolled. Avoid punctures."

She had lie down on her back and steepled her knees to position herself for him. Then he was gasping. He was frantically flailing his arms about, unable to breathe. She looked up to see that he had stretched the condom over the head on his shoulders and had pulled it all the way down to his neck! She jumped up and used a fingernail to puncture the elastic over his gaping mouth. When he collapsed onto the back of the chariot she yelled at him, "Are you that stupid, numbnuts?"

He looked up at her and replied weakly, "Yes, they are numb!" He then passed out. That was the extent of Marty's memory until he awoke to a wool job.

Josephine shook him but he wouldn't awaken. She glanced forlornly at his by then useless appendage. Still naked she strolled down to the river to splash water on her face but fell weakly backward. She lie there staring up at the stars. She had no recourse but to relieve the pent up desire still raging within her.

Then the face of a man, almost transparent in appearance appeared looking down upon her. Odd, she thought, that she wasn't afraid. The face's mouth opened and a comforting voice spoke to her saying, "In all my years of fishing I have never used my rod at a better fishing hole." He laughed and then said, "It looks like I'm going to be lucky tonight. What a catch!"

He consummated his conquest three more times. Just before she fell into a contented deep sleep she heard him say, "I'm Gabriel Angel. My friends call me Archie. Tonight I went fishing to fulfill a prophesy, as was my charge. Good tidings to you. You are blessed." He then held his hand next to his ear with the thumb and pinkie finger extended and said, "Call me."

Marty listened as she finished her account of what had happened during the night. He was angry and it showed in his words to her, "My God! You were raped! Who was this 'Archie' character. You must report this. That man deserves to be locked up or worse yet, stoned."

"No, Marty. I cannot report this. Everyone will say I led him on and that I have sinned." She then arose and walked over to the river's edge where she'd awakened and bent over to pick up something. She returned to Marty's side and handed it to him saying, "He left his card."

Marty read the words printed upon the card. "What the hell? That man was no fisherman! I'll bet he had this printed over at Abdul's Kosher Mart. Anyone can go to the K-Mart and have just about anything printed on a cup, or a shirt, and on a phony business card."

Josephine started to sob uncontrollably. She looked at him and with tears streaming down her cheeks she cried, "It's all your fault. If you had known how to put on a condom in the first place ... None of this would have happened!"

He glared menacingly at her and said, "To have fallen for that guy's phony lines of camel shit, you are one dumb bimbo! I should have stretched that condom over your head!"

She bolted upright and slapped him hard across the face. "You donkey's ass! I'm going to tell everyone it was you who raped me!" She turned and stormed away in the direction of town leaving him alone with his thoughts. 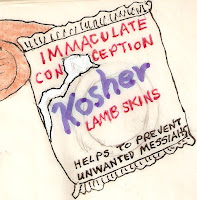 He noticed something shiny on the ground next to his foot. He leaned forward to pick it up. It was the discarded wrapper to the condom that been wasted the night before.

He was about to wad it into a ball when he noticed something curious about it. His eyes followed the jagged edges where it had been torn open. He shook his head and rubbed his eyes and studied it once more. Initially he thought he was letting his imagination run wild. He drew in his breath and realized he wasn't sure of what to believe. The tear had curiously obliterated the letters "TRA."

He jumped to his feet and read what was left of the red lettering, "Immaculate Conception..." He glanced up at the sky and said, "My God, this can't be happening!"

We all know where this is heading now, don't we?

Hmmmm...this must be the unabridged version that I didn't get in bible study ;)

I think I prefer this version...

We're probably going to hell, but that hilarious!

Bwahahahahaha. Hey it could have happened that way. Bwahahahaha. Excellent. Can't wait for the next installment. I love your vivid imagination.

Have a great day and weekend. :)

You never know if it happened this way or the way we've come to accept. History is ofen the tall tales of those who were there.

In your wisdom, I'm sure you are correct, sir.