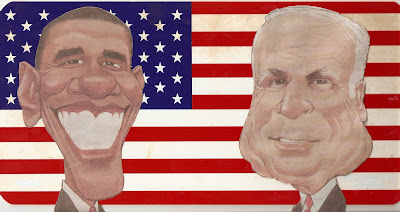 One Day and a Wake Up Left
I decided that I'm going to cast my vote for the one man who can fix the economy, end the war in Iraq and Afghanistan, and cut our taxes!

Then I earned that Merlin the Magician is not on the ballot!

Two Really Worthy Candidates!
The long and torturous campaign road that began two years ago will culminate tomorrow when America goes to the polls. Those two years provided a plethora of new words for the English language.

The following is a list of some of these new words to add to your vocabulary:


Acornucopia - the many new voters, fictional, living and deceased recruited to vote

D'ohbama - Homer Simpson's cry when he voted for Obama by mistake

Hickocrites - rednecks who answer polls in support of one candidate, but vote for another instead

Obamaflage - the ability to deny the whereabouts of family members

Palindrome - Words spoken by Sarah Palin, that even when read backward, still make no sense

Racist - anyone who says anything negative about Barack Obama

Succupulant - one who supports a candidate they lost to in primaries, in hopes of landing a cushy cabinet job

As usual, your humor is marvelous.

Don't you just love this country? What a great place to live.

Keep on keepin' on.

So much for my Webster's dictionary.

I'll take the polar bear. He's probably good at foreign relations since he lives so close to Russia.

I would have voted for Santa...if it meant a bigger present on Christmas.

Thank you. Yes, you gotta love this country when you can poke fun at our leaders - I couldn't get away with that in a lot of other countries.

I thought that was pretty good, even if I did make it up myself.

I'm doing my best to rewrite the dictionaries. Good choice - the polar bear.

I do believe Santa would take care of those who supported him.