What In the Hell Is Myrrh?

Two couples are about to set out on their fateful journeys to the small town of Bethlehem. Gathering in the heavens is a host on high preparing to spread comfort and joy across the land. Marty and Josephine are about to become key players in the drama because of a clerical error. How they came to be involved in the holiest of nights is chronicled in the previous installment: I'll Be Me Damned!

Josephine was sitting against a tree watching the sun slowly sink beyond the mountains to the west. Soon the light would yield to the blackness of night and the stars would appear as miniature jewels above the Earth. Had it really been almost eight months ago that she had stared up at those same stars? It was on that night that Archie the Fisherman had stood over her, gazing at her naked body. Then he was upon her, helping himself to her - four times!

She muttered to herself, "He doesn't call ... He doesn't write ... Not even a postcard!" She looked down at her child-laden stomach and added, "The bastard!"

She closed her eyes momentarily ... Two hands slipped underneath her bodice and cupped her breasts. A pair of thumbs and forefingers tweaked her sensitive nipples. She bolted upright and slapped his hands away. "Marty, cut it out!"

"Damn it Josie," the discouraged man said. "You are my wife."

"Marty, you know the prophesy. A woman untouched by a man shall give birth to a child...," she responded to his unwanted caresses.

Some miles away a similar scene was being played out by another couple. The young woman, heavy with child bent over to pick a flower. Suddenly the back of her dress was yanked up and a man moved his pelvis against her exposed charms. His hands reached around and captured her breasts in his greedy palms.

She turned and shoved him away. "...But you are my wife!" he muttered crestfallen.

"Remember the prophesy. ...A woman ..." she said admonishing her husband.

"Yeah, yeah," he replied. "How can I forget it? You've only been reminding me day in and day out for past eight months!"

Across the land the scene was being played out in other households with nine other couples.

High above the firmament, The Old Man slammed his fist on the desk and turned away from the bank of monitors. "Me damn it, Gabriel! I suppose you have a Me damned explanation for this?"

The Angel shrugged his shoulders and said, "Hey! Do You have any idea just how many You damned Marys and Josephs there are down there?" He glanced at the Boss and grimaced, "Heh-heh. Of course You would know."

"Well, not exactly," he answered with a grin on his face. "You see, those women aren't going to give birth to sons - and they are not going to Bethlehem."

"I decided to have some fun with Your competition. I sent them to Baghdad!"

For three straight days the people of Earth looked up into the sky and trembled in fear as they listened to the loud roars of thunder above. No mere mortal would have dared to think that He was ROTFLHHAO.

Ten days had passed when Marty stormed into the house and slammed the parchment document onto the table in front of Josephine. "What is it? What's wrong?" she implored of him.

"Can you believe this? Caesar just raised our taxes again! If we don't show up in Bethlehem in 24 days with the money - we will be arrested. Does he think I'm made of Shekels?"

Josephine thought for a moment, smiled and said, "Perfect. That's when the baby is due."

"Huh? Are you crazy?" he asked incredulously. When he saw the look on her face he nodded, "Oh yeah, the prophesy."

"Marty," she said with a worried look on her face, "Did you ever get down to the Used Beast of Burden dealership to buy us transportation for the trip?"

He nodded, "Of course I did! I got the last camel on the lot. All he has left now are donkeys."

"Good. Camels give a better ride and get better mileage per gallon of water."

A poor carpenter holding onto the reins of a donkey turns onto the beaten path leading to his house. He is met by his wife, great with child. He sadly tells her that there were no camels. He had to take the animal he has in tow. The woman speaks not but nods in humble gratitude. He helps her onto the beast and gathers up a small bag of their belongings. He pulls on the reins and they begin their trek to the west. 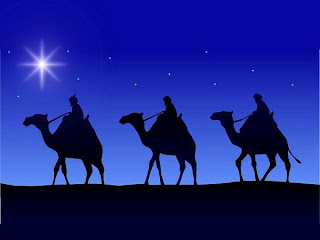 In the distant East three travelers have stopped at the last gift shop within 200 miles. After having consulted the Registry for the baby shower gifts, two of the men are holding the gifts they will purchase. One had chosen Gold, while the other had decided on the Frankincense. The third is standing by a monitor and scratching his head, obviously confused. He turned to his companions and asked, "What in the hell is Myrrh?"

So it began, three journeys that would forever change the world and the fate of mankind. Traveling to the Southwest to Bethlehem are Marty and Josephine by camel. Also on a route to Bethlehem are Mary astride a lowly donkey being led by Joseph. Following a guiding star the Magi are traveling from their Eastern lands.

Perhaps conveniently omitted from Biblical documents by the scholars and historians of the day, there were ten other journeys. Forgotten documents would show evidence that on the 25th of December on that same night, the population of Baghdad increased by thirty.

(To be continued in part 5, the conclusion of this epic story as revealed in: What? No HBO?

Hey it could of happened just this way. Bwahahahahaha. Love it.

Yeah, all we have is the word of those who wanted stories to tell the grand kids.