Having a Ball (of Confusion) 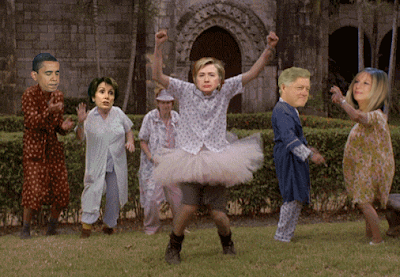 Miracle Worker
Three Arkansas surgeons were playing golf together and discussing surgeries they had performed.One of them said, "I'm the best surgeon in Arkansas. In my favorite case, a concert pianist lost seven fingers in an accident, I reattached them, and 8 months later he performed a private concert for the Queen of England."

The second surgeon said. "That's nothing. A young man lost an arm and both legs in an accident, I reattached them, and 2 years later he won a gold medal in track and field events in the Olympics."

The third surgeon said, "You guys are amateurs. Several years ago a woman was high on cocaine and marijuana and she rode a horse head-on into a train traveling 80 miles an hour. All I had left to work with was the woman's blonde hair and the horse's rear end. I was able to put them together and now she's a former senator from New York who just got appointed the Secretary of State."

The Reason We're in a Recession

Three contractors were visiting a tourist attraction on the same day. One was from New York, another from Texas, and the third from Florida. At the end of the tour, the guard asked them what they did for a living. When they all replied that they were contractors the guard said, "Hey, we need one of the rear fences redone. Why don't you guys take a look at it and give me a bid?" So to the back fence they all went.

First to step up was the Florida contractor. He took out his tape measure and pencil, did some measuring and said, "Well I figure the job will run about $900. $400 for materials, $400 for my crew, and $100 profit for me."

The guard, incredulous, looked at him and said, "You didn't even measure like the other guys! How did you come up with such a high figure?"

Gettysburg Affair
An older man wearing a stovepipe hat, a waistcoat and a phony beard sat down at a bar and ordered a drink.

As the bartender set it down, he asked, "Going to a party?"

"Yeah," the man answered, "I'm supposed to come dressed as my love life."

"But you look like Abe Lincoln." protested the barkeeper.

"That's right. My last four scores were seven years ago."

Sex is like a Roller Coaster
It goes like this - you get it on with your partner. There is anxious anticipation as you start. You start slowly, climbing your way to the top.

There are smiles exchanged, and giggles, maybe even caressing or hand holding. The excitement builds and builds. It nears the top. The expressions on faces become wondrous and excited. Then as it hits the pinnacle, things move very fast. There's a quick motion, the heart races with complete excitement; faces are all in total pleasure. Arms are flailing, heads are bouncing, and there is some noticeable screaming going on.

The rest of the ride is up and down, twisting and turning, lots of bumping, sometimes in the light, sometimes in the dark, sometimes there's a surprise, and sometimes it becomes all too familiar but always...always...at the end, there's a big smile on the face, hair is all messed up and everyone is talking about how great it is while some of them say, "I wanna go again"...

The Staff Of Life
Little Johnny's is coming home from the store swinging a loaf of bread in one hand, and the other hand in his pants pocket.

Along comes Priest Joe and he thinks to himself, "This is a good opportunity to say something from the bible to Little Johnny."

Mountain Men
Two fur trappers are sitting by a camp fire somewhere in the wilderness of the Rocky Mountains.

The first one says to the other, "What do you want to do tomorrow?"

"I don't know. You have any ideas?" replied the second.

"I was thinking maybe we could go beaver hunting."

"Nah!" exclaimed the first, "I don't like the nightclub scene."

Bwahahahahahaha. Loved them all. Thanks for the first laughs of the day. Have a great day and weekend. :)

Looks like your funny bone got caught in a loop.

Glad to start you day off on the right note.