Thinking: A Terrible Waste of a Mind

Sometimes I find myself wasting my time ... thinking. I don't mean thinking in general, I mean wasting my mind thinking about something ... general!

Now if that made sense, I would click on that publish button and call this a post. Of course, if I did that, I'd be accused of not thinking ... period.

I'm referring to banality, wasting my mind and time thinking about things trivial. As I see it, there is trivia and then there is the trivial. I love trivia and all things nostalgic, especially when it comes to music, movies and TV shows of the 50's and the 60's.

Nostalgia is like a grammar lesson: you find the present tense, but the past perfect! - Source Obscure

I take pride in remembering that the Skipper's name on "Gilligan's Island" was Jonas Grunby and that the full name of Wrangler Jane on "F Troop" was Jane Angelica Thrift. I know that Buck was the name of horse ridden by both Ben Cartwright on "Bonanza" and Matt Dillon on "Gunsmoke." I could go on and on with such trivia, but to me it's entertainment and not trivial.

To me, the trivial matters that waste my mind and my time are nonsensical and cannot be answered with logic or fact. To wit: 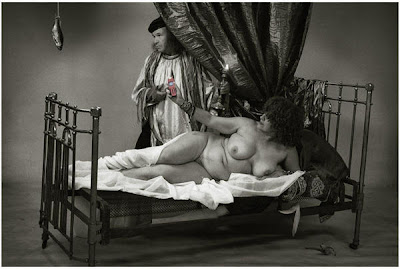 Christopher Columbus
How was an Italian able to convince Queen Isabella of Spain to finance what was then a half-baked idea to sail west for a short cut to China in the east?

What did she get in return to seal the deal? Since the consensus back then was that the world was flat and that ships would fall over the edge, surely she would want at least a show of (ahem) faith. Perhaps she thought it was true what they say about Latin lovers?

See what I mean about trivial matters? It was a complete waste of mind thinking about it! ... And yet, the accompanying picture above got me to thinking if that might not have been the way that moment in history went down. After all, aren't many present day deals made in the same manner? Oh, the sacrifice old Chris might have made!

The world was made round so that we would never be able to see too far down the road. - Anonymous 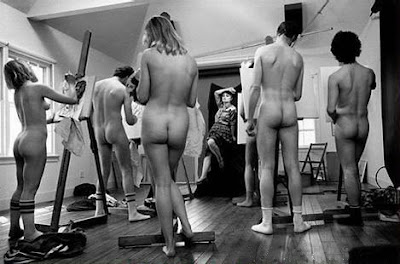 Turning the Tables
I once wasted my mind and time wondering why nude artists never paint fully clothed models.

Would the artist become distracted trying to imagine what was beneath the model's clothing? Would it then be the model who would get distracted by wondering how the artist would look wearing clothes?

Why is it that most nudists are people you don't want to see naked?

Semantics?
Here's something that I've wasted mind and time thinking about:

I've seen a lot of those commercials on TV by auto dealerships that set my mind to wasteful thinking. It may be a matter of semantics but it's trivial nonetheless.

How come I cannot buy a used car anymore? It seems that dealerships are only selling previously owned vehicles nowadays. Now if that isn't perplexing enough, they are advertising that their automobiles and trucks are certified!

I need certification that someone else once owned the car? That one has a sign that says 'low mileage.' Let's see, the odometer reads '89,000 miles.' Unless they've been driving the thing around on the lot, I'd take a wild guess that it's not a brand new set of wheels.

Wait! I see what they are up to! They are rolling the odometer forward in order to pass it off as used previously owned. Hey, they'll have to get up awfully late in the day to fool me!

Closing Wasted Thoughts
Ever notice that people who spend money on beer, cigarettes, and lottery tickets are always complaining about being broke and not feeling well?

The next time you feel like complaining remember: Your garbage disposal probably eats better than thirty percent of the people in this world.

How come we choose from just two people for president and 50 for Miss America?

You're thinking way too much, but all these points are good ones. I wish I could answer them too, but alas I can't.

Now if I could only think of something for my next posting.

You have an extremely nice blog. To become a prosperous person the essential factor would be to have positive thinking. Get pleasure from Sky Rocketing Good results with Turbo charged Positive Affirmations... Grow Positive Thinking So It is possible to Eradicate Strain Out of your Existence, Raise Your Self-Confidence and Program Yourself For Lifetime Achievements!