A couple went for a meal at a Chinese restaurant and ordered the Chicken Surprise, for two.

The waitress brought the meal, served in a lidded pot, and set it down upon the table before them.

Just as the wife was about to serve herself, the lid of the pot rose slightly and she briefly saw two beady little eyes looking around before the Lid slammed back down.

"Good grief, did you see that?" she asked her husband.

He hadn’t, so she asked him to look in the pot. He reached for it and again the lid rose, and he saw two little eyes looking around before it slammed down. 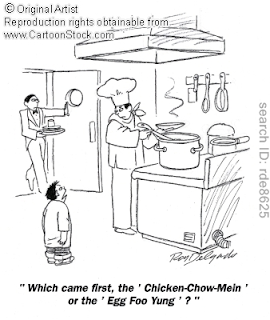 Not exactly sure of what he'd seen, he decided to have another look.  He had no more touched the lid when it again rose and once again a pair of beady eyes were looking at him.

Rather perturbed, he called the waitress over, explained what was happening, and demanded an explanation.

"Prease sir," said the waitress, "what you order?"

"Ah! So solley," said the waitress , "I bring you Peeking Duck."

The Chinese man shouts, "What that for?"

The Jewish man replies, "Chinese,  Japanese,  all the same to me."

About an hour passes when the Chinese man leaves his seat and knocks the Jewish man off his chair.

The Jewish man asks, "Was that for hitting you?"

The Chinese man replies, "Iceberg, Goldberg, all the same to me!!"

A Jewish man and a Chinese man were conversing. The Jewish man commented upon what a wise people the Chinese were.

The Chinese man was incredulous, "That's impossible," he replied. "Where did your people eat for a thousand years?"