Could You Throw In an Ox? 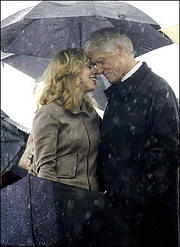 Godwin Kipkemoi Chepkurgor, a government official, made an offer he thought could not be refused. Keeping with Kenyan traditions, he made what was considered to be a "very generous" offer. Offers such as his are the time-honored practices of convincing a father to give away his daughter's hand in marriage.

Chepkurgor, a 36-year-old city councilor in Nakuru, was said to be waiting for an answer or a counter offer from the father of the girl who had caught his eye. His offer, a formal one to observe proper protocol, was made through the Kenya's Foreign Minister.

Former President Bill Clinton had not responded to the offer of 40 goats and 20 cows for his daughter 25 year-old daughter Chelsea. Generous as far as African maidens' dowries go, news of the offer had made news wires world-wide. Another Kenyan official said that acceptance of Chepkurgor's offer could go a long way in soothing relations between the U.S. and Kenya.

The love-struck Romeo, who is also an Electrical Engineering graduate, had become enamored with Chelsea in 2000 when Clinton visited that country. He vows to remain single until he receives an answer. In a letter for the benefit of news agencies he wrote: "Had I succeeded in wooing Chelsea, I would have had a grand wedding." He said that the Nobel Prize winner, the Archbishop Desmond Tutu of South Africa would have presided over the ceremony.

Chelsea's would-be suitor praised Clinton for his accomplishments while President. He also praised Hillary Clinton for standing by her man during the Lewinski scandal, saying she acted with the grace of an African woman. He added that Lewinski would fetch 4 goats and 2 cows in some villages. (One is left wondering, what offer did he make for Hillary? How about throwing in an ox? Let's make a deal!)

Curmudgeon responsible for this post: Hale McKay at 9:45 PM

Chelsea is probably worth every penny... er, hoof and horn, of the offer. But the liability of having Bill for a father-in-law might reduce her value by a few percentage points. So, if one of the goats turned out to be barren, it would be about even.

Of course, having a U.S. Senator and future president wannabe as a mother-in-law could be considered either a huge bonus or a huge liability, depending on your point of view.