I know My Writes! 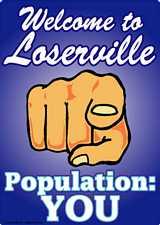 For the record this finger is pointing at the author and not at any of you readers. Yes, I pulled one of those brain-freeze, asleep-at-the-wheel acts of dumb this evening. I ran a stop sign and ended up in Loserville.

The evening started innocently enough, in fact I was off to a routine practiced nearly every evening after a day at work. I suspect many of you follow the same steps when you fire up the new primary boob-tube, your computer. First I head to my own blog to read any comments that may have been deposited by any drive-by readers, as well as the regular visit

ors. Next, I guide my spaceship into orbit at my blog roll. (I have a rocket ship as my cursor.) Decisions, decisions, who do I read first? The eenie-meenie-miney-moe method is too long, so I opted for a more scientific approach; I went with the old heads-or-tails modus operandi.

Oops! Heh-heh. Now where'd the two-headed quarter come from? Tonight's winner in a best of three contest was Hoss !

In today's post, as well as the previous one, he has been touring his blogoverse and giving us a sampling of a typical day in his life. Like others, I have been one the lemmings leaping into the abyss of his blog roll. At last count, there are 103 stops on his daily treks.

Now Hoss knows talent, you don't need me for you to have that epiphany. So far every link to bloggers out there that I have clicked on per his advice, I have enjoyed nearly every word of every post. The last two days have been no exception. I have one policy that I adhere to faithfully, and that is that I leave a comment when I visit other bloggers.

Earlier I had been following Hoss' footsteps, picking up the markers he left along the way. Those markers, of course, are some of those 103 daily stops of his. I finished one site, moved onto another, onto the next and so forth. I read Shane, Latiga Flint and Lejnd. As Hoss had said, I was treated to some well written material.

It was at my next click that I found myself flabbergasted! What do I find? A classic case of plagiarism! Literary larceny! The nerve of someone! Who is this thief? This ingrate was an outright crook!

This wasn't a case of disguised plagiarism either. This character had copied what I was reading verbatim, word for word. You must be wondering, how could I be so sure? How come I was so adamant?

Because it was My stuff he had stolen!

Oops! It was my site!

The blogger you see emulating an ostrich, is me. While I was burying my head, I saw the error of my ways. Good ol' Hoss had listed me and my site on this particular leg of his travels. I forgot to check my IV before I turned on the computer. There was no more coffee dripping through the tube. I clicked on a link to myself, and in a myopic look at the screen "saw my stuff being posted by someone else."

After a caffeine transfusion, while Johnny Nash's "I Can See Clearly Now" rattled in my skull, I decided that I would forget the whole incident.

But after some thought on the matter, I decided to fess up instead. What good is it for me to try to write some funny stuff, and not be able to laugh at myself? So in the interest of humor, I will share the joke with others. After all, the joke is on me today. 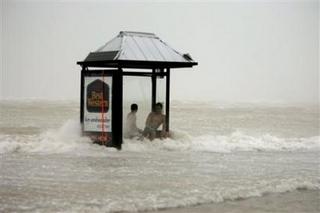 In the interest of humor, check out this picture of two students sitting in a bus stop on the Florida Keys. While Hurricane Rita is skirting past the Keys into the Gulf of Mexico, these Mensa candidates decided to wait for a bus even as the storm surge waters rushed in at them and their shelter.

I don't think their destination is important, I'm more curious about where they came from! If ever they wanted to become bloggers, I have a suggestion for the names they can use - Flotsam and Jetsam.

With their commuting skills so well documented, could they ever hope to make Hoss' blogroll?

No.349
Curmudgeon responsible for this post: Hale McKay at 12:17 AM

Maybe they were just enjoying the surf??

The counselor was feeding the kid's head? I'd string her up for a human dart board. Always more fun with a moving target!

Hi Mike, I agree Hoss has a great eye for blogs! And I like your policy of always leaving a comment and shall, from now on, attempt to do the same :o)

I can't always say I leave a comment when I read a blog. I have to have something pertinent to say and many times I don't.

And yours is one blog where I've just lurked a few times. I remember a story about an elderly man with a stash of lady's underwear. Left me speechless.

Thanks for visiting my blog, though. (I think it was you)

You might have erred there, kid. I think this is the tippy-top of an oil rig off of Texas, and they are holding down the drill so they don't get a blowout. I think. But maybe I read that on some other guy's site....

What a bunch of silly people.

Hoss is my paramour, so I cannot speak against him BUT I do appreciate his taste in a good blog. You, my friend, have a good blog.