To Choke A Planet 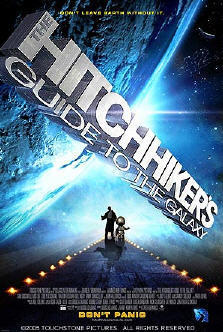 "People often ask me how they can leave the planet, so I have prepared some brief notes.

How To Leave The Planet

4. If that also fails, phone the Pope for guidance. His telephone number is 011-39-6-6982, and I gather his switchboard is infallible.

5. If all these attempts fail, flag down a passing flying saucer and explain that it's vitally important you get away before your phone bill arrives.

The above is an excerpt from the Introduction to The Hitchhiker's Guide To The Galaxy, by Douglas Adams. I am using this passage and the poster from the recent screen adaptation of the novel, because they won't stop the world and let me off. My pleas for Scotty to beam me up have gone unanswered. This planet is in a constant state of war, terrorism, and starvation among other ills. Unlike Arthur Dent who unwittingly escaped the destruction of earth for the construction of an interstellar bypass, I would like to escape what appears to be imminent destruction by our own inhabitant's.

Since this is obviously impossible, I have decided instead to express my disgust and displeasure of the world's state of affairs by reworking a song. The original lyrics, which appeared in a Coca Cola commercial, sent a cute and wonderful message: "I'd like to teach the world to sing in perfect harmony..." But I am afraid that the song's message has fallen on deaf ears. I won't point fingers to blame any one entity or its peoples, but rather I'll attack the world itself.

I'd like to grab the world by its neck, And choke till it turns blue

Then I would squeeze and despite its pleas I'd throw a punch or two.

Then I would scold it and make it know how to feel misery.

And to see it on its knees wanting peace in all the lands .

(That's the song I sing)

Then maybe it would awaken and say what the heck.

(And peace would ring)

I'd build the world a home and furnish it with love

(That's the song I sing)

I'd like to think that someday all wars and famine will be no more. It would be nice if it were to happen in my life time. The lyrics of John Lennon's Imagine comes to mind.

Peace, to all my brothers and sisters.

and peace be with you too.