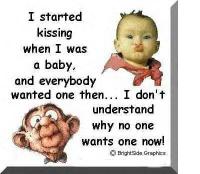 Even when we feel good, it is simply that one day is better than the last. We aren't always regular and we have to watch what w 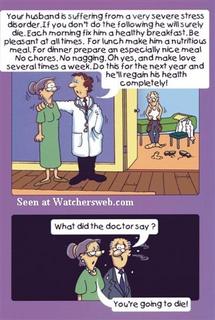 e eat. Good results from a visit to the doctor's office is like winning at Bingo. I didn't take that red pill because it affects my stools. Mom still isn't using her walker like she should. Well, no I guess I'm not using my cane either.

We spend more time with Arthur and Angie nowadays because Phil and Connie must have left town. You don't know them? Arthuritis and his wife Angina are here nearly everyday. And Phil Ashio and Connie Lingas haven't been around in some time. I feel sorry for those ball players like Kobe Bryant? Why, you ask? Them announcer men are always talking about their hang time. Tarnation, that's private stuff. I know a lot about han

g time, but I don't go letting the world know! And I know a lot about dribbling too.

What's with those whippersnappers down at the public beach anyway?
I went down there the other day and they wouldn't let me in. So I went to the lifeguard office to ask them why I couldn't go to the beach. You shoulda seen the one in charge. In my day we called life jackets like that "Mae Wests." I asked her if she wouldn't mind standing over me so I wouldn't have to spend money for one of them beach umbrellas.

By the look on her face, I don't think she had a hankerin' to do it.

Anyway she said she was going to jog up and down the beach for a while. I decided that might be interesting enough to go fetch a beach chair and camp out for a while. I ain't no rocket scientist or nothin', but I seem to recall something about perpetual motion where two bodies in motion tend to stay in

motion. Or something like that. Anyway, I was bound and determined to see what happened. Well all I ended up with was a crick in my neck from nodding in approval so much.

From the beach I went to the store to get some eggnog. Now I don't know if any of you youngins know how they make eggnog, but is a secret I have known all about since long before you were born.

Contrary to what many folks think, you can't buy the original recipe eggnog at the store. First of all, you had to get ol' bessie drunk and slip a little of the applejack in the hen's food before anything else. The cow's milk and the hen's egg 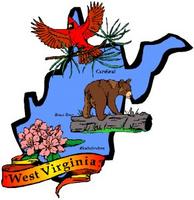 s together made an eggnog the likes of which you never tasted.

I grew up in West Virginia and my grandparents' eggnog was almost as famous as their apple cider. Now how you get apples drunk, is a story for another day. (I'm sure some of the other W.Va. bloggers know about cider and nog too.)

Those were simpler times when I was a kid back in the hills of Roane County. One thing I miss is when we used to go skinny-dipping in the ponds and rivers near my granparents' farm in Amma. I used to watch the Hayes sisters in the pond down the hill from the farm. You see, being a dirty old man is not a sickness. It was a learned skill from our youth. I think they knew when we were watching for a long time. I had been skinny-dipping with girls my own age before, and was surprised one day when they told me come out of the bushes and join them. It was

the first time I ever saw girls older than me naked up close. They acted like I'd been in that pond with them all the time.

They sure had shapes and bumps that the young girls were missing. When I asked about them they giggled. They called them bubbies and shook them before my amazed eyes. When they stood up, it wasn't the bubbies that got my attention. I swear there was more hair there than there was on my head. I begin to shiver. I said I must be getting cold. When I got out of the water they could see that I was freezing solid. They all giggled and told me it was nothing, that I was just having a popsicle. They said it would go away. That was the first and last time I went skinny-dipping with those Hayes sisters. Like I said before, I miss skinny-dipping.

Like the song "Don't It Make You Want To Go Home" by Joe South, there is an Interstate highway running through the farms and homes where I went skinny-dipping as a child. That part of West Virginia is gone as is that part of my life. Those Country Roads can't take me home anymore, not to the home I used to know. But Mountain Mama always has her arms open.

Curmudgeon responsible for this post: Hale McKay at 12:25 AM

Tsk, tsk, a popsicle... LOL!! Haven't heard that one before! Its quite possible some of your kin knows some of my kin. The name Rita comes to mind.

Come, come. You're not that old. I bet you could still popsicle the Hayes sisters, ifn u wanted. If you ever learned how.

Uh, oh...Hoss is nasty, isn't he? While you were skinny dipping in Roane Co. I was probably doing it, but in Kanawha County!

True,Hoss. I'm not that old, just practicing. As for the Hayes girls - I was 12 at the time and they were 15,16 and 18 then. They would all be in their 60s now. (Not far behind them.)Uh yeah, I learned how eventually, just not that day.
Kenju-The Elk in Kanawha county ran behind my house and we had a few spots for dipping.
Inanna- Rita? Hmm doesn't quite ring a bell, but it has been 37 years since I left W.Va.