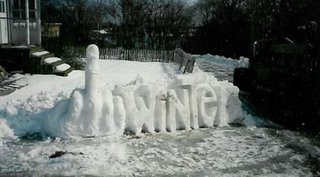 It is the first day of winter officially!
...And I am already tired of it!

It looks like we are going to have a dirty-white Christmas. There is no snow to speak of, save some flurries between now and the 25th, forecast for us in the Boston area. They have a saying up here, "If you don't like the weather in New England, wait a minute!"

Yes, it'll be a dirty-white Christmas. The remains of the last snow two weeks ago looks like mashed potatoes with too much pepper shook upon it. The fumes from the vehicles' exhausts and the sand from the city sanders have transformed what could have been a white backdrop into dingy mounds of frozen dirt-snow.

Walking can still be hazardous for those who must travel by foot, a patchwork of cleared and unshoveled sidewalks alternating every two or three houses in their path. Block after block, particularly those lesser traveled, streets are still lumpy from the frozen snow thrown there by the shovels-full by thoughtless residents. Those lumps, laced with salted sand, have already started to create next spring's unwanted gift, pot holes!

We have only had two snowfalls so far. The first was only an inch or so, slightly more than a dusting. The second was a more generous 6 inches, but it was delivered in a white-out blizzard fashion. There were drifts 5 to 6 feet high. It is that snow that now lingers as a dirty-white blanket, which has more of an appearance of huge piles of guano than the white stuff that is desired on Christmas. 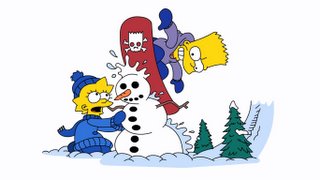 tically sad that there were no snowmen to knock over. They couldn't even slip into the cemetery to overturn gravestones because the city had installed security cameras there. They coudn't steal hubcaps to throw like frisbees at the houses, because they were buried in snow. It is fortunate for us that they won't even put in a little effort to move the snow clear of the wheels. It seems we have lazy vandals.

Don't think for one minute that these fine up-standing youths would give up so easily. Right there, accessible and easy to move was a veritable treasure trove in almost every yard. A poke here and a jab there with a knife and they would walk away from the corpse of a 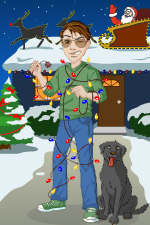 seven-foot inflated Santa Claus and Snowman. Pity those who spent $150 for those new inflatable "snow globes," only to find them in a heap in their yard. The carefully strung lights that once hung on the shrubs and on the stair railings were now littering the neighbor's yard, as was his into his neighbor's yard. In some yards, the decorations were gone altogether.

We've been lucky so far. Our property, directly underneath a street light and surrounded by two houses with motion activated flood lights, has been spared. In fact, every house on our street have been vandal-free. Even my hand-made signs sticking in a snowbank at the end of the driveway is still there. The one sign reads "Free Snowmen. Assembly Required," while t

he other reads "Free Snow. Help Yourself." To date I have yet to find any of the snow in my yard missing. No one has erected a snowman in my yard either.

I know, I'm dreaming. Yeah, I am dreaming of a dirty-white Christmas.

No.471
Curmudgeon responsible for this post: Hale McKay at 12:14 AM

I agree, winter is already too long. Although I'm now in TX, I know exactly what you're referring to when you say dirty snow. The Chicago area has more than enough every year to hate.

Someone asked me one Christmas if I was going home to Chicago for the holidays. I told him I didn't lose anything in Chicago, why should I go back?

The Mistress of the Dark said...

That first picture sums up how I feel about this winter and it just started. It's been so cold and we've already had about 7 inches of snow. GAH!

Not very fun if you're the one having your car repainted.

If it's any consolation, down here in WV we have no snow either. Just what's left frozen to the ground from last week. It always freezes and stays in the wrong places, like the sidewalk, driveway, anywhere you run the risk of and actually busting your butt! LOL!
(funny pic too, btw :)