I Sought The Flaw 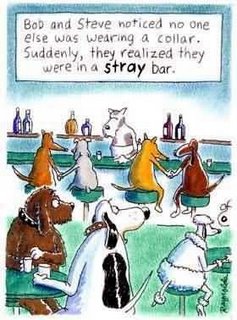 A recent addition to my Blog Roll, Stringman has a funny post up about some mergers of large companies and the names they might take on. You should check them out. Tell him The Pointmeister sent you.

I left a comment for him that I wished I'd thought of that idea! I also hinted that I might be inclined to "borrow" that idea sometime, but with credit to him.

If you are familiar with the business world, my twenty years in the stock market qualifies me, you have probably heard of "spin-offs." If you haven't, a "spin-off" is simply a new company formed from the holdings of a larger company. Many times these are the result of mergers.

So it is, rather than steal Stringman's idea, I will attempt to name some spin-off companies that might not make it to the Standard & Poors indices.

Abercrombie & Ditch - The successful clothing company will try its hand at the landscaping and gardening industry. The company will specialize in tools for the home gardeners and do-it-yourself landscapers.

Best Fry - The large electronics company will attempt to make a niche for itself in the fried foods industry.

Arm & Needle - The Baking Soda giant will test the lucrative waters of the pharmaceutical industry when it opens the doors to a syringe manufacturing plant.

Merrill Lynch Pierce Fenner Smith & Wesson - The huge Securities firm will take over the gun company and spin-off its own weapons plant.

Greasy Jiffy Lube - The mechanics will dance and sing as they give customers a lube job. Jiffy L

Smith Barney Fife - Another Securities firm will dabble in the restaurant world, with its establishments decorated with Barney Fife pictures from the Andy Griffith Show. It isn't Mayberry, but they are hoping fans of Barney and the show will frequent this nostalgic bar and grill.

Goldman Sachs of Fifth Avenue - This Securities corporation will trade in fashionable clothing and goods.

Pan American Bandstand - Dick Clark and the Airline will team up with guest musical acts at 35 thousand feet. "Captain, how would you rate the last song?"

Boon Dockers - The popular clothing line creates Dockers for the Rednecks. There will be his and hers bib overalls, flannel shirts, union suits and a wide variety of tee-shirts with a southern flavor.

International House of Roadcakes - The chain, famous for pancakes and breakfast fares, jumps into the culinary world of road kill.

I thought I had seen every email list coming across the web, but I missed that one. It is funny!

Back again.....thanks for the visit and comment. Ditto every show you mentioned: Ding Dong School (even though I was too old for it), original Jeopardy....and I did not know that Merv bought the rights - I always thought he did create it. Live and learn!

Mikey, you make me laugh consistently. Thanks.

Well done, my friend! All original gems. I particularly like Bed Bath Beyonce, Naked Fish & More, and Int'l House of Roadcakes. Bravo. The Dick Clark airline was a riot as well. I could see that happening. "Captain, I'd give that landing an 8: easy descent and no puking ... a little rough on the touchdown, but, good overall."

Thanks for this and all the other smiles you've given out... Happy New Year!

I thought you were going to call it International House of Cockroaches!

I would like to wish you and yours a very Happy New Year. Also, continued success in bringing the people who drop by your site a lot of joy and laughter. You can count me among them.