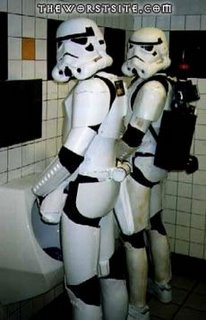 How does a Storm Trooper take a leak?
Standing in front of a urinal of course!

I finally saw the last chapter of the Star Wars saga. It seemed strange to finally see the sixth film herald the end of the series. In a way, I grew up on the series. Indeed, a lot of us did. I also felt a tinge of sadness. It is over. There will be no more eager anticipation while we wait for the next installment.

ogy for the Star Wars franchise. He could go forward, back to the rebel victory over the Evil Empire. Let us see what happens when Han and Leia marry. Let us see the rebuilt Republic. Let us see the inevitable battles with the pockets of the remaining forces still loyal to the Empire.

Even though you have ended the series, George, you have haven't finished the story. There are still three more blockbusters. Perhaps, someday.

Ideaman, aka Captain Eclectic, aka The Pointmeister comes up with a lot of ideas like that all the time. Nearly all of them remain on the drawing board of course. Some are so re

diculous they are discarded altogther. The most asinine of all, however, will become Blogs.

It was my idea to the people of Pisa, Italy, to build another tower. The second tower would lean the other way. As such, the two Leaning Towers of Pisa would hold up each other.

It was my idea to install a signal blocker on TV sets that would prevent so-called ministers, such as Al Sharpton, Jerry Falwell and Jessie Jackson access to the airwaves if they are going to open their mouths. This device can also be programmed for politicians, movie and television celebrities, and sports figures.

It was my idea to have In-Law Ejector seats installed in the front and rear passenger seats of all vehicles.

It was my idea that when there are auto problems, the manufacturers would be recalled.

It was my idea, that at no additional charge, the Department of Motor Vehicles would take as many pictures as necessary until we are satisfied with what photograph is to be attached to our drivers licenses.

No.481
Curmudgeon responsible for this post: Hale McKay at 8:45 PM

Oh well, I'm glad you thought of all those things. It's nice that someone is trying to come up with good ideas. :)

Hope to see them come true in my lifetime.

I got my driver's liscence renewed just a couple months ago. They took four pictures before I even knew it (no flash) and immediately let me see them on a computer screen. I got to pick one!

And George Lucas originally planned the series for nine episodes. He just got tired recently and said no more. That doesn't mean someone else can't do it, they would just have to sweettalk GL into giving his blessings. I bet you could do it!

Yes, he was originally going to do 9 episodes. I was hoping that maybe he would.

Spammer, I don't know how you got past the security, but for the record I wouldn't walk across the street to see Metallica with free front row seats!
...Hawk your tickets to someone who cares!