Where Have All the Umbrellas Gone? 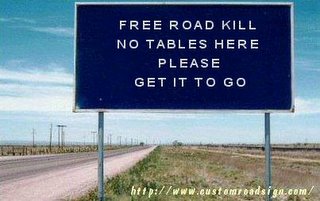 The carnage was awful.

At the Road Kill drive-up window, I picked up an expensive pocket salad. It was the Dead Presidents special. No dressing. All greens. It was going to be very hard to swallow, but it was supper time. It was late, so I had to get it to go.

Back in the waiting room of the hospital, outside the emergency room I sat down with the head surgeon. His apron was stained with the life blood of the patient. The prognosis had been right. She'd had a failing heart and only a transplant would save her.

I'd told him to go ahead with the operation. I couldn't let her suffer anymore. I couldn't let her go either. I needed her. He was holding the diagnosis and the results on the sheet of paper he was waving around as he spoke. "I'm afraid a there was a lot of fluids lost, but she's going to pull through. She has a lot of spirit. She isn't ready for the bone yard."

He handed me the paperwork as I passed the Dead Presidents pocket salad to him. As I read the line items, I shuddered. I looked up as the greens disappeared. I stood up and asked when she would be released to go home. I was relieved when he said she was free to go home then and there.

Outside of his office I saw her. She looked none the worse for wear. I don't know if she was happy to see me. I know I was sure happy to see her. She was probably still upset with me for unceremoniously leaving her at the hospital early that morning. I sat down and fondly patted her on the seat.

As we drove off I watched the hospital dwindle in the rear view mirror. I chanced a glance at the Road Kill diner as we drove by it a few minutes later. I realized she was okay when she began to sing. If I didn't know better, I'd have thought she was Maureen McGovern as she belted out ..."There's got to be a morning after...."

As I neared home, the allegorical thoughts and hyperbole vanished. The Road Kill diner shimmered and morphed into its true persona: the Bank of America. The pocket salad was money bearing the likenesses of dead Presidents: Grant and Jackson. They were joined by Franklin.
....The hospital was transformed into an auto repair garage. The patient was my truck. Of course, the surgeon was a mechanic. The heart transplant: A new fuel pump. The paper he handed me of course was the bill ... and the breakdown.

Do you know how many of those drinks with the little umbrellas in them six hundred dollars could buy? Well, as for myself I have no clue! But I'll bet it's a lot - enough to get you shit-faced! I'll make another bet - I won't be finding out this summer. I guess I'll settle for ... A coke!

Where have all the umbrellas gone ... Long time passin' ... Gone to mechanics everyone ... When will they ever learn ...

No.530
Curmudgeon responsible for this post: Hale McKay at 12:02 AM

You are such a creative writer, I just love to come to your blog 'cause I know there's always gonna be something entertaining to read!

And, you poor soul, you've still got the same truck.

That sounds like a lot of dead presidents for a transplant Mike, but what would I know we don't even have presidents, just prime ministers a few of whomm can't be dead quick enough.

I'm suddenly seeing you in my mind as Hank Hill...

C'mon over sweetie, I've got a big bottle of TGIFriday's MUD SLIDE in the fridge. :) Let's get tipsy.

Thanks for the chuckles, things have been a royal pain here, I needed a laugh!