Actually, I'm not interested in what Delawore. I don't care what Tennesaw either. I am not going to answer with 'I don't know, Alaska.'

I am being distracted by a new program, Office Assistant. I think Suzie and I are going to get along just fine.

She's going to help me with a different sort of name game, most notably "Run-ins." We have come up with quite a list too. Don't know how to play? ...And don't say, 'I don't know, Alaska.' This simple word play game is an exercise in which you take the names of celebrities and use them in sentences without changing spelling or separating any part of their name. Adding punctuation is acceptable. The sentence should otherwise be grammatically correct.

For example: Did Frederick March in the parade? Easy enough, right?

Here are some that Suzie and I were able to muster:

William, Tell me how you were able to shoot the arrow at the apple on your son's head.
Didn't Ringo Starr in Caveman?
Can Manfred Mann the controls by himself?
I saw Minnie Driver her ball into the water hazard on the 13th hole.
Is Maria Callas with everyone?
When did Michael Landon New York?
Every morning, George Burns the toast.
Did you see Virginia Wolfe down her sandwich?
Did Mariah Carey her own baggage?
Did Johnny Cash his check?
Does Jody Foster any ill will for film critics?
Charlie Pride open the wooden crate.
Is Deborah Harry?
Did Norman Vincent Peale the orange?
Didn't Jerome Bettis that the Steelers would win?
When did Tammi Faye Baker cookies?
Did Mary Tyler Moore her boat at the dock?
Did Terrence Stamp all of the invoices paid?
Wisely, Ernie Banks his money.
When did Wiley Post the flight plan?
Was James Worthy of the award?
Did Nancy Walker dog this morning?
Did Wally Joiner in a game of Hearts?
Did Terri Hatcher plans yet?
Just what was it Jimmy Piersol?
Isn't Irene Dunne with that book? 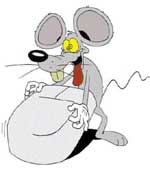 Did Nell Carter own groceries?
Did Ester Rolle up her sleeping bag?
I saw Ezra Pound the nails into the board.
Did James Bond with the boy next door?
Where did Harrison Ford the river?
I saw Donald Duck the snowball.
Man, was Lorne Greene with envy.
Did Hugh Grant the reporter an interview?

Suzie just said that was plenty to post. She says we should leave some names out there for the readers to use if they decide to play. Besides she wants to test Option number five on the menu. Who am I to turn down a direct order?

Curmudgeon responsible for this post: Hale McKay at 12:20 AM

Did Robert Frost the cake yet?

I don't know why I went with poets.

What did Oliver Reed?
Did Cybil Shephard the sheep?
Did George Bush-walk today?
Did Robert Service his car?

And a couple for the Aussies

Did Shane Warne the batsman?
Did you see Peter Holt the traffic?

I could do that with co-workers' names, but that would be confidential information. But just know that I COULD be very WITTY if I only had a brain.

I actually DID that with co-workers' names in a company newsletter once. Of course, I kept it clean and P.C.

Examples that I remember are:
Turn the Paige, Stewart.
Is Allen Dohmann the Pillsbury Dough Boy grown up?

It's more fun with celebrities, or names people recognize.

I heard that Bill Withers in a crowd.

I'll have to try it with my workmate names. This is where you really wish you had some guy named Long Dong working next to you.

Did you check in Miss Cellania's category?

Thanks for stopping by my blog last week! It's been crazy - which is why I haven't had the chance to come say hello. Although I do see my good friend Mr. Fabulous here!!! ;)

Wow, folks! As many in your comments as I had in my post and no dupes. Good job all.

Did Hank Aaron the side of caution when he discovered what a Babe Ruth was?

Very good, Jip. Two in one.

Michael.. sometimes I wonder what you eat...

Im really wondering how did BRAD PITT Angelina against Jennifer.

How does BARRY BONDS with those steroids users?

NICHOLAS SPARKS my romantic life when I give "The Notebook" as a gift.

I remember how BUCKY DENT the aspirations of those red sox in 1977.

I like to HALE MCKAY and eat it to!!!

LOL T. - very good. This post sure generated a lot of these run-ins.