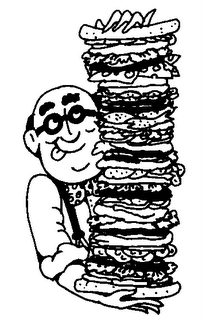 I decided to clean out all of the blogs stagnating in draft status tonight. No small task this, unless I simply deleted them. Instead, I thought I'd give it a go and amalgamate them into a single post, a patchwork blog, if you will. I realized that it was not going to be as cut and dry as to just copy and paste.
....The rolling thunder I heard was not coming from outside, but rather was rumbling behind my belt buckle. Soon there was a veritable smörgåsbord surrounding my work space. A generous cold cut medley on a bulky onion roll was rather neighborly with a bowl of potato chips. The chips' partner-in-crime, a tub of Helluva Good Onion Dip sat in waiting. A perspiring can of Coke Classic was in arm's length to answer the call of duty when the solid Blog fuel was ready to be washed down my gullet.
....Once energized on the sandwich, I could sense forlorn from yonder onion dip. I had no flight goggles but that didn't prevent me from grabbing a chip and letting it take flight. In a bold loop-the-loop maneuver I dove into the dip and was next airborne with a bountiful helping of the tangy paste. Banking into a steep right turn, the salty craft and its cargo penetrated the space between my lips. There would be several more sorties before this post would be published.

What if...
... Now is the moment you've been waiting for your whole life?

On one draft was that single sentence that sometime, somewhen I typed there. I thought it to be a poignant thought, profound enough around which I could build a Blog. Maybe it was too deep for this shallow mind? It's a scary thought, isn't it? It ranks right up there with another burning question. "What if the Hokey Pokey is really what it's all about?"

File this under "Strange Things To See"

A Hummer with Handicap Plates. (How do you suppose the driver gets in and out of it?)

Divine Intervention
A man's assets were going down the drain as the market took a nosedive. Depressed, he decided to go to church. "Grab your Bible and drive to the ocean," the minister advises. "Sit at the water's edge and open the Bible. The wind will riffle the pages, but eventually it will stay open. Read the first words your eyes fall upon and they will tell you what to do."
....The man did as he was told. When the pages stopped moving, his eyes fell on the words that were meant for him. A year later, he returns to the church to see the minister wearing a $1000 suit and driving a brand new Jaguar. He hands the minister a thick envelope. "Please accept this donation for your church," he says. "Thanks for the advice."
...."What words did you see that brought you such fortune?" the minister asked.
....Replied the man, "Chapter 11."
"Strange Things To See 2"
A Federal Express Truck sitting curbside sporting a Denver Boot. (When it positively has to get there overnight.)
Let Your Fingers Do The Walking
(This appeared in the Jan 2006 issue of Readers Digest, which was reprinted from a column in the Washington Post.)
The Yellow Pages are unique in that they're laid out with hyphenated headings atop each page, i.e., Brass-Brick. The good folks at The Washington Post think there's more than meets the eye here and asked their readers to concoct definitions for these headings.
Attorneys-Audiologists: Lawyers who guarantee they'll get you a hearing.
Banquet-Beauty: A eupemism for a plus-size woman.
Billing-Blood: A loan shark's late-payment fee.
Carpet-Catastrophic: A text message you don't want to receive from home when your friend is house-sitting your dog.
Cellular-Chalkboards: Wireless phones with annoying ring tones.
Financial-Fire: For when cooking the books didn't work well enough.
Foam-Foods: The nation's top supplier of airline meals.
Rubber-Safe: Where the bank puts the bounced checks.
The above would make a good meme or challenge for everyone out there. Besides, it would give everyone a chance to 'curl up" with a book - even if it is the Yellow Pages. Any takers?
Finall 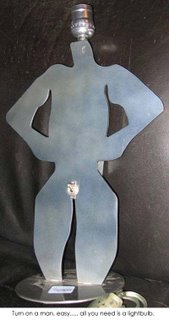 y: For The Ladies, A Must Have For Your Home Decor!
In the military they establish certain times in which you are allowed to light up. You can smoke when the "smoking light" is lit, and you must butt them them when it's off!
How about a love-making light, girls? When you want to fool around, all you have to do is to flip his switch. When you turn it off, that means there'll be no f**king.
This lamp will give new meaning to turning your man on and off! Brighten up your bedroom and your sex life with the Man Lamp.
There are several switch sizes to choose from. There is also a dimmer switch available to allow you to control just how bright or dark you want the ambiance.
A light bulb, available in dim and bright, represents his head. It's of little use anyway, since that's not the head you'll be interested in when you're flipping his switch.
No.638
Curmudgeon responsible for this post: Hale McKay at 12:46 AM

Hi Mike ~~ Thank you so much for the
birthday wishes. I have had a great day. It is Peter's turn on Sunday.
He will be 70 on May 28th.
Thanks again. That is some lamp.
Take care, Merle.

Well, my lamp would always be in the "on" position. But I like the idea...where can I get one?

What a great buffet, Mike. I think the lamp idea is brilliant. Maybe it can bring about Pavlovian conditioning, so that if men turn it on, the ladies will automatically see it and be 'in the mood.' Hmmm. There's a future for that, I think ...

So where can I pick up one of those love lights?

T said you were under the weather. I hope your feeling better

Is there smoking after?

Heres a few heading for you, direct from the Logan phone book:
ESCORT-FEED: What you give your prom date.
PLUMBING-PSYCHOLOGISTS: these guys will not only tighten your loose screws, but they'll look at your pipes while they're at it.
and finally...
LAWYERS-LUBRICATION: Self explanitory.

Re: the Hummer with the handicap plates? Likely a mental handicap. Just thought you'd want to know.

Very good post idea! That lamp crfacked me up!