(A new semi-regular News Blog in the time-honored style of tabloid journalism.)

Imagine an open can of tuna left sitting out in the hot sun all day! That's the kind of news out of Washington D.C. and our world as covered by the The Tuna Smelt™. 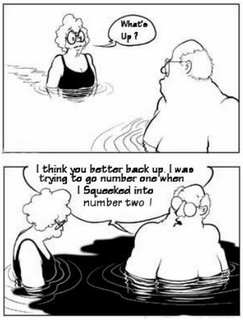 Today's The Tuna Smelt™ exclusive "scrapes the bottom of the toilet bowl." It is brown journalism at its best. Several months before his accidental shooting of a lawyer while quail hunting, Vice President Dick Cheney held a private pool party at his ranch.

After consuming several bowls of his home-made chili, Cheney was involved in a previously unreported shooting. Guests who witnessed the tragedy say the victim was a female lawyer. They said they heard the muffled staccato shots coming from the pool. The crimson-brown color spreading in the pool around the victim was first thought to her blood.

After floating several minutes face-down in the Cheny-soup, a relunctant Mrs. Cheney finally pulled the woman to the side of the pool, where equally reluctant guests help to pull her from the water. Several guests who just happened to be trained life guards, refused to administer CPR or other life-saving methods. Obviously, mouth-to-mouth resuscitation was out of the question. The Tuna Smelt™ reporter at the scene could not determine if life-saving measures weren't used because of the substance in which she was drowning, or if it was because she was a lawyer.

Finally, using a bicycle pump, a slow acting Secret Service man was able to revive the female barrister. Said Mrs. Cheney after the incident, "Dickie likes to make bubbles in the water when he is swimming in the pool or is taking a bath in the tub. I guess he went in the water a little too soon after eating."

When questioned, a Secret Service man assigned to Cheney said, "I think he was acting out the pool scene from his favorite movie, Caddy Shack. If the President was here, he would have played Bill Murray's character."

Cheney, the last to be interviewed stated, "Ain't that just like a lawyer, always talking like they got a mouth full of shit!"

Unbeknownst to the Vice President, the force of his "shots" had blown his swimming trunks to smithereens. He emerged from the pool to the gasp of several guests and sauntered past them to the cabana. One irate guest felt utter disgust. She said, "I just came from the hors d'oeuvre table and there were no cocktail weiners there. The cheapskate must've kept them for himself!"

That's the story, soup to nuts, if you'll forgive the pun, of Vice President Cheney's pool party. You read it here first in The Tuna Sm

That's the story and we're stinking sticking to it.

That was just gross. But very, very funny. Just what I need this Monday morning. Thank you!

"It is brown journalism at its best."

That is too true Mike.

No matter how hard I tried, I couldn't get past the cartoon in the pool. My mind just pooped out on me.

Are you sure that was just water you were wiping off your floor!!!'

Hope you are feeling better!

Hey, I was surprised I didnt get any reaction from you to my Message from Beyond I did my best McKay writing imitation!