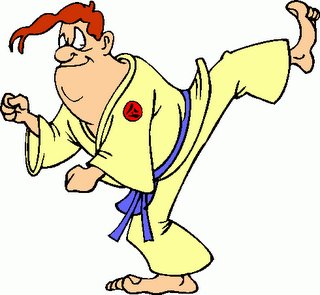 I am Master Pooh, head of the Charlatan Temple, which is famous for tlaining losers in the disciplines of the Martial Arts.
....This is the story of one of my gleatest students, Walking Kane. I taught him seclets of Jiu Shitzu, Hai Karate and Low Karate. He was a glood learner and also mastered seclet arts of Tutti-Frutti, Tutu, Judon't, and Dung Doo.
....He was vely quick to learn how to fight in small apartments when I schlooled him in Tai Con Do. However, he became true Charlatan Pliest only when he mastered Kung Phooey.
....He is only student who learned to walk acloss of the loom of glasses filled with champagne, without falling or bleaking a glass, and he accomplished feat without spilling a drop. Flom that day on I called him "Glasshopper." 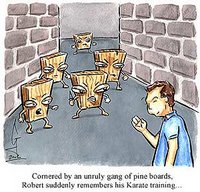 ....To earn his first weekend pass, he had to survive test I call 'Board of Education.' He passed test without getting a single splinter. It was first time that he draw sawdust in heat of battle.
....Before Glasshopper allowed to go to town, I first warned him of the dangers there. Because of his silly haircut and Charlatan robes, people there know he is loser trying to be Pliest. I tell him 'splecially watch out for brothels. Not good for Pliest to get clabs. Man no good in battle if he must stop fighting to sclatch balls.
....Glasshopper have more than one hard head it turn out. So he placticed art of Kung Nookie Do all night long. He get into trouble when one man saw he was wearing pair of Charlatan

Pliest butt clack boxers under his robes. It seems man get wrong idea about young Kane. He think he like Pu Pu Can Do. Glasshopper not like it. He later said, "Kane's Pu Pu for outplut only. No input can do!" Master Pooh laughed when Kane make butt clack joke.
....Pletty soon a pletty nasty fight bloke out. Many men were there to visit plostitutes and they get mad that girls like Kane. They told men they plefer man who plactice Long Dong Fu like Energizer Bunny, he keep going and going. Plostitutes say other men more like stuffed labbits in bedloom.
....Men not know Martial Arts and not very blave, so they called for man who 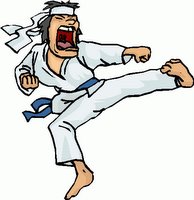 Kalate champion to challenge Kane. He charged at Kane and scleamed like banshee taking clap and who wear jock stlap too tight. Like Indiana Jones who shoot warrior with swords in Pooh's favolite movie, Kane act bored and laise foot. Kalate champ meet Kane's barefoot in gloin. Kalate champ lose.
....Pliests at Charlatan Temple eat from own garden. One day pliests notice that lot of clops like lice and gleens missing. Pliests decide to guard garden to plotect food. Each night, Pliests take turns to watch clops.
....It was night when Kane's turn, he become Master Walking Kane. That night he catch clop clook led-handed. To his suplise, thief is big overglown lodent of worst kind. Thief was member of Samulai Labbits. Not only these labbits know Martial Arts, they have lazor-sharp teeth.
....Light away labbit leady to plactice fighting skills. Pletty soon two of them leally going at it. Labbit get firs 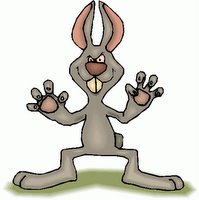 t hit with a labbit punch to Kane's gloin. There was no flies on Kane unless they pay lent first. Kane learn lesson well when he fought Kalate champion. After that fight he made self steel jock stlap. So when labbit land labbit punch to Kane's gloin, labbit get sore fist.
....Labbit pletty quick and decide to use teeth. Before Kane can move away, labbit bite leal hard Kanes gloin. Much to chaglin of Samulai labbit, bite only bloke lazor-sharp teeth. Labbit had to give up and was last seen lunning away. Labbit never come back and Pliest's clops of lice and gleens was plotected.

No.662
Curmudgeon responsible for this post: Hale McKay at 12:02 AM

Oh, my, those butt clack boxers have ruined me for life.

Kick in your clotch.

I can always count on you for a laugh. The butt clack sholts are hillarious.

Went out looking for a book on 'The Art of Kung Nookie Do'.. but couldnt find it!!!
T