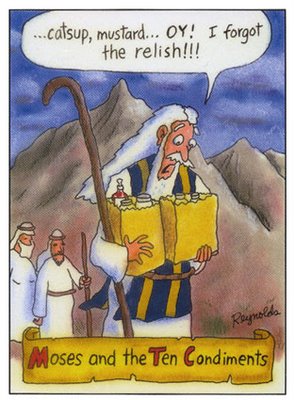 This was all there was after leading his people for 40 years? His company was about to cross over into a new era, a so-called Promised Land, but he wouldn't be going with them.

....There was no gold watch. There were no stock options. All he had to show for all his blood, sweat and tears was an engraved plaque. That and a dollar bill wouldn't even buy a cup of coffee, especially at Starbucks.

It had angered Moses to such a snit, that he'd broken the celebratory plaque over his knee. He was left with no choice but to draw money from petty cash. Someone would have to make another trip to the Mount Sinai Convenience Store Emporium and Tire Center to pick up those necessities.

He felt under-appreciated at that moment. It seemed that the Board of Directors had forgotten how instrumental he'd been during that hostile take-over attempt by Pharaoh Enterprises two years before. His personal crusade to thwart the merger had left Pharaoh wondering if they'd been infected with a plague. The financial strain of the buy-out eventually caused PE to go belly up. Their creditors swarmed over the liquid assets like a swarm of locusts. Moses always like to say that the waters of economy parted and swallowed them.

Then there was that smelly EAU mess. Not unlike any large company, Moses did not welcome the advances of the Egypt Association Union. Since he was management, Moses had to rely upon his employees to do the right thing when it came to the question of unionization. Before he'd been elevated to the position of manager of the Accounting Department, Aaron had served as the liaison between the Union and management. In spite of the warnings that the employees would be left in a wilderness, the EAU just sort of wafted away after failing to gain acceptance.

Moses sighed deeply as he looked around the scene. Howard Lott, the head of Human Resources, was screaming at some unfortunate employee because there were no plates or napkins. Lott was an angry man anyway. He'd been so ever since his wife had been assaulted at a Christmas party last year. It would be his last good deed for the company, he thought as he grabbed his jacket and headed for the door. It would take him a half hour or so to make the round trip to the store.

On the way, he passed Mr. Jordan, the Chairman of the Board. They each gave the other a cursory nod and proceeded on their separate ways. Moses and Jordan did not get along. Jordan had been in a position to reap substantial financial rewards had the merger with Pharaoh been consummated. Due in part to his greed, Moses considered him a thief, and as such often referred to him as the "Reaver Jordan.'

Because of his work to prevent the merger, Jordan never forgot it. In fact, it was Jordan who had pushed all the right buttons to bring about Moses' forced retirement. Of course, there was that other matter, when Jordan had tried to hire his own son to fill a high profile postion in the company. It was Moses who reminded the higher-ups of the 'no nepotism' policy. As such Jordan's attempt to hire his first born was killed.

He contemplated all that had been and what could have been on his return to the offices. In two bags he carried with him the paper plates, plastic utensils, napkins, and yes, of course, the ten condiments.

It was ironic that he'd never see the promised lands of the company's future, all because he'd chosen to cross the Reaver Jordan!

No.658
Curmudgeon responsible for this post: Hale McKay at 12:10 AM

Priceless! You worked together Scripture, Satire, some HORRIBLE puns, and (my favorite) a Human Resources Manager screaming at a disgruntled employee! (Lott's wife "assaulted?" Wonderful!)

This one ought to be in the running for "Post of the Year."

(I wonder if they'd give you a plaque? Maybe a tablet of stoneware?)

I really like this one Mikey. Ya done good, son.

Priceless! And I didn't even get the part about Lott's wife being "assulated" until I read Duke of Earle's comment. That cracked me up.

Now that was funny!

That was really good....Loved the wording!!!

I'm glad I took Peter's advice and came over for a read, great story, blogger has a habit of evoking old memories.

Thanks everyone. I think I had the most fun writing this one than I have for most of anything else I've ever posted.

That was funny and superbly written. I loved the names you used and the way you used them.

I do like those puns...well done! They make me groan, but those are the best kind.

Thank you Shelley. I hope I have a fighting chance against the others in the contest.

You are great at this. Came over from Shelly's.

Thanks, Marcia. I read the other entries and the competition is very tough to say the least.