Ain't Worth A Hillary Of Beans 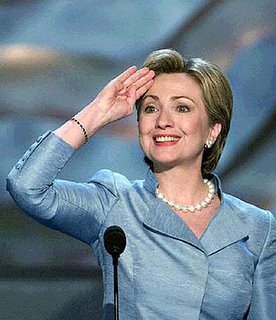 You probably think this is over-the-top Hillary-bashing by yours truly, don't you?
You'd be wrong! To the contrary, these are just a few of the "synonyms" used by likely voters in the 2008 primary. So far, 410 polled Democrats in New Hampshire have shown no love for Hillary Clinton.
....The poll has shown that 45% of the Democratic Granite State voters are just as negative about her as Republicans. Of special interest was that a large group said that they would vote for her in the primary, but under no circumstances would they vote for her as President of the United States.
....Of those polled, the distrust of Clinton was as strong with women voters as with the men.

No.711
Curmudgeon responsible for this post: Hale McKay at 6:30 PM

Well, if she does get elected, that makes Bill the First Lady. I wonder if he'll wear a dress?

The Republicans are praying she'll be the Democratic nomineee. There's plenty of skeletons in her closet.

I jsut gained some respect for them as well.

New Hampshire has my favourite motto of all time:

They must know something...

P.S.
I meant to ask you about "Damage Control School"...Sounds vaguely political, but I imagine it's a bit more literal...

I do not think we will see Hillary on the Hill...

Surely one Clinton is enough Mike, the people must have learnt something from the second Bush!!!

I'm not a fan of hers either. She reminds me of a girl I went to high school with - I repeatedly wanted to push her off a cliff, but there weren't any cliffs where I lived.

Wow...those were SO much nicer than the words I came up with to describe her.

So do you think they like her a little? lol