Until Death Do Us Unite (part 2) 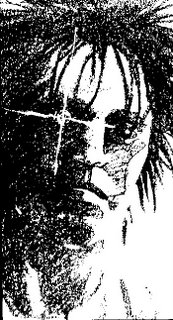 (This is the second installment of a macabre short story. You might wish to read the previous chapter here before continuing.)

For some reason unknown to him, Cash had not given up the ghost. Perhaps some higher power had given him the chance to solve his own murder, to bring his killers to justice.
....He was beginning to understand the power he had been given. It was apparent that he had to enter living bodies to maintain his continued existence. He had yet to determine how much time he could let pass before he had to seek out another host.
....So far he'd entered two people's bodies. Both were now dead. The wino had died from a massive heart attack. His former partner had committed suicide. This was the rationalization he chose to use to justify the fact that they'd still be alive had he not invaded their souls.
....Was it coincidence, or had he been guided by some unseen force to those particular individuals? As a living police detective, he would have never seen a possible connection between his partner and a wino. Yet, the two of them had witnessed his death.
....He was anguished by the fact that he had no memories of his own. He was acting on only those memories that he'd acquired from his previous hosts. Those memories, however, were only temporary. When his life force began to wane, so did the memories.

There was a sudden sense of motion. As if under the influence of some magnetic force, he was once again being drawn somewhere. He could only surmise that he was bound to another person who was as much a piece of the puzzle as the others had been. He had the feeling that for whatever reason, he had been chosen judge, jury and executioner. This was surely a Hell that had been decreed for him.
....He was following a police paddy wagon up a busy thoroughfare. He drifted inside the vehicle without effort through the closed rear doors. Two officers were seated on either side of a shackled female. A third armed officer sat opposite the trio.
....Thinking he was targeted for one of the policeman, he was drawn instead to the woman. In moments he was becoming one with her. A chill seemed to come over her as his essence merged with every cell of her body. Like the others, she appeared very aware of his presence. She seemed undisturbed by the intrusion. Her only reaction was to merely glance at her captors.
....It seemed that every synapse of her brain was discharging thought patterns and dream-like images at a rapid pace. It was if they were intended specifically for him alone. The emotions of those thoughts and images swept through him.
....Sharon Gates had been his lover. She was five-monthjs pregnant with his child. A glimmer of guilt crept over him as he learned 'again' that she had left her husband for him. Cash had told her that he was going to get a divorce. He'd promised her a happy home. He'd assured her that the baby would have a father.
....There was anger in her thoughts. She knew he had lied to her. All he had cared about was the sex! She had been scorned and wanted revenge. She had known of his shady off-duty escapades. She knew all about the payola. She was going to rat him out.
....She hadn't counted on the unwritten code that the police watch out for their own. She'd tried to convince these officers that the crack and drur paraphenalia had belonged to him. She'd insisted that she wasn't the criminal, but the victim of a crooked philandering cop. They didn't believe a word she had to say.
....Was it it out of desperation, or was she addressing Cash himself? She suddenly lunged and grabbed the gun from one of the cop's holsters. In the ensuing struggle a single shot was fired. Sharon Gates lay dying, a tell-tale bullet wound in her forehead.
...."Cash, you're going to rot in Hell...," she whispered weakly before passing away.

He was outside the vehicle which had pulled over to the side of the street. The policemen were standing around discussing the incident. They were no doubt making sure each of their versions of the story were in agreement. He could not hear their conversations. He was able to move closer. He would have to get very close to learn more. He was going to enter one of them.
....He couldn't move! He was at full strength and yet he seemed to be frozen in space. He relaxed to reserve his strength. All he could do was...wait.
....Sure enough, he didn't have to wait long. He was rising and turning away from the officers and the dead woman who had been his lover. If he'd learned nothing else, his selection of hosts had not been random. They weren't by coincidence. He was being directed. Someone, or something, was using him as a pawn.
....He was beginning to realize that in life Cash hadn't exactly been a model citizen. He had been an unfaithful husband. Apparently he had been a crooked cop on the take. He thought for a moment on Johnson's lingering last words. He'd said that Cash should let it go and that it was bigger than the two of them. It was beginning to look like quite a few of the "city's finest" were making a little scratch on the side.

The thoughts were interrupted as he noticed that he was soaring over an area of trees. He was headed in the direction of a large clearing that lay ahead. It was a cemetary. Moments later he was admist the attending mourners who here standing before a casket. It was not lost on him that several of the men were police oficers decked out in their dress uniforms.
....He knew that if he'd allow himself to look into the casket, he would not be surprised whose body was there. He heard the sobs of a woman behind him. That would be his wife with his son and daughter standing at her side. Maybe he had absorbed some of Sharon Gate's emotions, for he had no desire to look upon his family.
....His attention remained fixed on the coffin. This must be where that force had been drawing him all along. He had to join his body before it was to be interred. It didn't matter why there had been contact with Johnson, the wino, or his lover. He was tired. He was ready for that eternal sleep. He mustered all of his strength and dove headlong into the casket.
....He came to, groggy but still existing. It took a moment for him to realize that he was several miles above the city. The body had denied him access. He felt himself growing weaker. His thoughts were becoming muddled. There was a gentle tug at him. He was being beckoned again.
....He knew it might be his last actions, but he resisted the force. He was acting on his own urgency. He had to return to that funeral. He had to get to that casket. It wasn't his body!

I can't wait for more!