Guitarist, Andy Taylor of Duran Duran has called it quits. 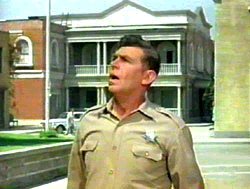 "We have reached a point in our relationship with him where there is an unworkable gulf between us and we can no longer effectively function together," the band said Thursday in a statement on their Web site.

Duran Duran apologized to fans for not making the announcement sooner, saying they realized that speculation had been running high about Taylor's future.

The band, led by Le Bon, were a big act in the 1980s but later faded from popularity before regrouping five years ago.

"Although obviously disappointed and saddened about this, we are excited about the next chapter of the Duran Duran story and look forward to seeing you all soon," the statement said.

....Meanwhile, Taylor has returned to his North Carolina roots of Mayberry, where he once served as Sheriff.

No.784
Curmudgeon responsible for this post: Hale McKay at 7:59 PM

Thanks for coming by my blog! :) I have been looking around yours here and you have some great posts. And very diverse!! I like that :) I will be sure to stop back here as well! :)

Well, who else has been sheriff of Mayberry Mike???

Andy will be much happier back in Mayberry with Aunt Bea. He just wasn't cut out for rock 'n roll. LOL.

I liked him better as sheriff anyway.

you mean there's another Andy Taylor? what a fraud; where's Barney Fife when ya need him!?! :+)

Thanks for the visit... I don't mind even if it was for the HNT's. Gotta have something to make Thursdays extra exciting. Will we see you? Please come back

Hi Mike~ It is always a shame when bands break up, but they lead a strange life and not everyone s suited to it. Thanks for your comments, glad you enjoyed, laughed, pondered etc. Are you trying to tell me my posts are too long? Actually I had a day off yesterday but getting set to go again. Take care, Mike,
Regards, Merle.

I knew when he made the toilet seats salute in No time for Sergeants, he wasn't cut out for a rock band.

I heard Opie wants to play the drums.lol
Really tho, Andy was a big part of their sound, it may be hard to replace him.

thanks for stopping by, I appreciated it very much.:)
tc