File this under:
"Some People Never Learn:"
chapter 1 - Be Careful What You Wish For

Until late Tuesday, early morning and all day Wednesday, the Greater Boson area had only collected 1.8 inches of snow this winter. The month of November had an average temperature in the 60s! December temps hovered in the 50s. January was unseasonably comfortable for the most part. It wasn't until the first weekend in February before the mercury in the thermometers began to gravitate to sub-freezing levels.
....I'm not one to look a gift horse in the mouth, and as such I was not forlorn about not hearing the local meteorologists use the term "wind-chill factor." As for the noticeable absence of snow around here, I was mildly amused at the irony that the City of Los Angeles, California had in one snowfall received more snow than Boston had accumulated all winter at that point.
....Whether it be attributed to El Nino, global warming, holes in the o-zone layer, cyclical changing weather patterns, or a combination thereof, I have been keenly aware that this has been a very strange winter. London, England has had two snowfalls recently! Phoenix, Arizona was struck with a crippling blizzard.

In parts of New England there are those who have been lamenting Old Man Winter's snub. Indeed, there have been those who have worn melancholy masks on their cranial facades. Woe were they, when two winter storms skirted across New Jersey, Connecticut and Cape Cod, sparing points north. 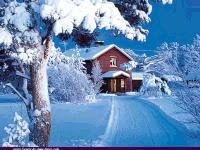 ....They say "hope springs eternal." Ah, so it came to pass that the weather advisories were issued that beginning late Tuesday and extending through Wednesday we should prepare ourselves for an "honest-to-goodness" old-fashioned Nor'easter!
...."Whoop-Dee-Do!" said I.
....The weathermen and women, I swear were euphoric, almost orgasmic as they spread the cheer to a snow-hungry populace. I don't think meteorologists are on a quota system, are they? A stipend in the form of a bonus kicks in when they get a forecast right?
....The Boston area has been fortunate, or unfortunate if you're a snow-monger, that those imaginary lines on the weather maps have put us on the didn't-have-to shovel sides of the rain/snow fronts. That is to say until this storm.
....Yet, we only received the mixed bag. The four inches of a wet snow that fell Tuesday evening and on into the wee hours of Wednesday was reduced to a sloppy slush anywhere traffic was moving shortly after an unseen sun arose somewhere in the eastern skies. By the afternoon the snow changed over to rain.

I am firmly convinced that somebody up there doesn't like me on certain days, yesterday and today being no exceptions. I don't know who I might have pissed off, but they decided to exact revenge. Was it something I said? Did I do something wrong? Did I break a Commandment? Instead of doing unto others as I would have them do unto me, did I misunderstand the instructions and did unto somebody before they did unto me ?
....When was I out there doing the manly deed of running the snow blower to clear the driveway, the snow stopped only momentarily before morphing into rain. Did I say morph? It was more like: poof ! By the time I had cleared the driveway, I felt as if I was a sponge that had been engorged to capacity in ice water!

You didn't think that snow and rain constitutes a mixed bag, did you? What do get when snow and rain are subjected to wind driven temperatures below freezing? Right you are, ice! (You win $100 for saying the secret woid. How many of you will admit to being old enough to recognize the previous sentence and to know who said it?)
....We awoke this morning to a wonderland of ice. (Is it no wonder I was wishing I was in another land ?) 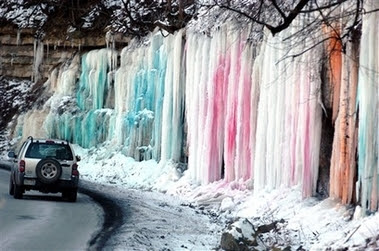 I remembered seeing the picture at the left when I was surfing the web yesterday. So I decided to google "colored icicles" and was able to find the pic again with no trouble.
....For eight years, Rich DeMary has been mixing food coloring in gallon jugs of water and pouring the contents over icicles hanging off the rocks on U.S. 19 near Rivesville, West Virginia. He said that he does it to surprise and delight drivers along the road.
....I thought to myself, "Now why didn't I think of that?" I could have poured one color of water in my driveway and as soon as it was frozen, poured another color and so on. My driveway might not have been clear of ice, but I sure would have had the prettiest driveway on my street, or in the whole city for that matter!
....Alas, I am stuck with your ordinary run of the mill ice, three inches thick in places. I spent two two-hour stints out there on Thursday tossing rock salt and ice melt on it and jarring every muscle in my arms and shoulders wielding an ice breaker in attempt to get rid of the stuff.
....I have to admit that I spent as much time on my ass as a ticket taker at a movie theater running an Ed Wood retrospective. Was that my neighbor across the street holding up a sign with 6.0 in black on it? At least when I performed a triple axle split with a three-quarter twist into a full spinning butt Salchow, the score card read 7.5. Tough audience!

What a way to spend four hours of one's birthday, as a resistible force trying to move an immovable object!
....I suppose a temperature of 24 degrees and a wind gusting to 45 miles per hour, should have alerted me to the fact that my endeavor was a lose-lose situation. What can I say but "Tomorrow's another day!"

No.897
Curmudgeon responsible for this post: Hale McKay at 11:43 PM

I'm sorry you had to spend much of it that way.

We went to the Great Barrier Reef today and it was really hot...Too hot, to be honest...I almost missed the invigorating feeling of walking outside on a Canadian winter's day...but then I went in the water and was happy to be here.

I hope you had a most excellent birthday, my friend!

i'm young but i know that line was groucho marx. where's the duck now?

i gotta admit, i missed snow, but this crud doens't even count because youcan play in it. it's too wet and disgusting.

I left the East Coast (Maine) and moved to this "warm" state of Texas ... only to freeze my butt off! It was 16 degrees this morning and the high today is supposed to be 36. With 20 MPH winds. The good news is that I can now use the pool year round ... swimming in the summer, ice skating in the winter!

Oh, yeah ... Jules told me it was your birthday today.

I just read a book about the afterlife by celebrity psychic Sylvia Browne. According to her heaven is exactly 75 degrees. Which makes me wonder if people who love winter weather will be bummed out. No skiing in the afterlife!

Happy birthday to you!

hey, I heard it's your birthday...hope you have a great one!!

How about a nice birthday spankin'?? ;)

That's a pretty cool picture of the ice.....Hmmm I wonder if hubby will climb on top of the house when we have icicles hanging off the edge and do that??...LOL

Ugh, ice. Much worse than snow. Those colored falls are pretty, though.

Hope you had a great birthday.

Gidday Mike,
Blimey has ole' Americaland had the odd bit of cold weather, not to mention a little bit of snow.
A friend who lives in Colorado had 3 feet (yep feet) of snow just before Christmas and then another foot of snow a week later. Now that's a bloody lot of snow in anybodys language.
You sweet talker (or rather writer) you, mentioning about what "a hansome lot my family are" including myself. Shucks I've gone all blushy