Redneck Is As Redneck Does 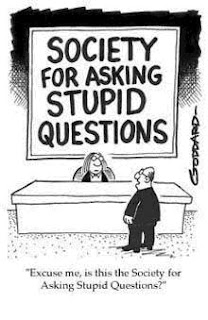 Bubba and the Lawyer

Down south, Bubba called his attorney and asked, "Is it true theys suin' them cigarette companies fer causin people to git cancer ?"

"Yes, Bubba, sure is true," responded the lawyer.

"And now someone is suin' them fast food restaurants fer makin' them fat an cloggin' their arteries with all them burgers an fries, is that true, Mista Lawyer?"

"And that lady sued McDonalds for millions when she was gave that hot coffee that she ordered?"

"And that football player sued that university when he gradiated and still couldn't read?"

"That's right," said the lawyer. "But why are you asking?"

"Well, I was thinkin . ... what I want to know is, kin I sue Budweiser fer all them ugly women I slept with?" (thanks, Earl) 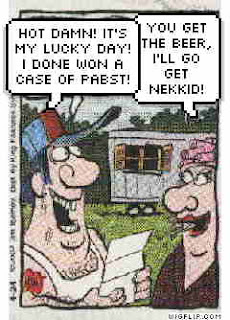 A Redneck buys a ticket and wins the lottery. He goes to Austin to claim it and the man verifies his ticket number. The Redneck says, "I want my $20 million."

The man replied, "No, sir. It doesn't work that way. We give you a million today and then you'll get the rest spread out for the next 19 years."

Again, the man explain that he would only get a million that day and the rest during the next 19 years.

The Redneck, furious with the man, screams out, "Look, I want my money! If you're not going to give me my $20 million right now, then I want my dollar back!"

After having their 11th child, an Alabama couple decided that was enough (they could not afford a larger double wide) So, the husband went to his doctor (who also treated mules) and told him that he and his wife/cousin didn't want to have any more children. The doctor told him that there was a procedure called a vasectomy that could fix the problem.

The doctor instructed him to go home, get a cherry bomb (fireworks are legal in Alabama), light it, put it in a beer can, then hold the can up to his ear and count to 10. The Alabamian said to the doctor, "I may not be the smartest man, but I don't see how putting a cherry bomb in a beer can next to my ear is going to help me -- I don't want to go deaf!"

So, the couple drove to Georgia to get a second opinion. The Georgia physician was just about to tell them about the procedure for a vasectomy when he noticed that they were from Alabama. This doctor instead told the man to go home and get a cherry bomb, light it, place it in a beer can, hold it to his ear and count to 10.

Figuring that both learned physicians couldn't be wrong, the man went home, lit a cherry bomb and put it in a beer can.

Two guys are drinking in a bar. One says, "Did you know that lions have sex 10 to 15 times a night?"

Survivor: Texas
A major network is planning the show "Survivor 2" this winter. In response, Texas is planning "Survivor, Texas Style."
The contestants will start in Dallas, travel through Waco, Austin, San Antonio, over to Houston, and down to Brownsville. They will proceed up to Del Rio, on to El Paso, then to Midland/Odessa, Lubbock, and Amarillo. From there, they proceed to Abilene, and on to Ft. Worth and back to Dallas.

Each will be driving a pink Volvo with a bumper sticker that reads, "I'm gay, I voted for Al Gore, and I'm here to confiscate your guns."

The first one to make it back to Dallas wins.

No.930
Curmudgeon responsible for this post: Hale McKay at 8:08 PM

LOL! I just love rednecks. Always gives me something to talk about, especially at family reunions.:)

Let's see now, where was I?

That last one is truer than you know...speaking as one who lives in Texas.

Hahahaha!
Those are all new to me.
Survivor Texas was fantastic!
Thanks for the chuckles.
Hugs