Bush and the Beanstalk 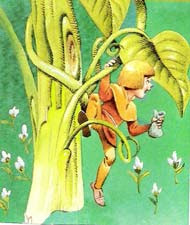 Once upon a time in the obscure nation of Texas there lived a lad by the name of George. Now this lad, because he could only grovel and crawl in his youth, was given the middle name Walker.
....Later in life, even as an adult, he continued to grovel and crawl and as such, the name stuck. (Although abbreviated, the world would one day shudder before Dubya.)
....When their son George was born there was much anticipation of greatness. Hoping to see a silver spoon clinched in the mouth of the newborn, the parents however, were dismayed to find instead a brass ladle projecting from the infant's rectum.

....To some, to say he came from a poor background would be a stretch, but among the affluent, the family was personae non gratis because they never topped "Forbes" or "Fortune 500's" lists. The matriarch of the family, actually an ogress, pushed for her husband to become King. That quest never yielded the fruits of a kingdom, but he was many years later able to fashion himself into the ruler of a petty monarchy and took on the title of the President of the United States. 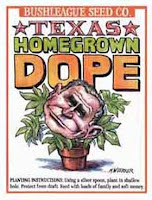 ....George the Younger, visualizing himself as a crown prince, could often be seen wearing his Burger King Crown around town on his frequent AWOL stints from the Air National Guard. Fearing that their son would never amount to much and would probably follow in his father's footsteps one day, the mother decided it was time for him to leave the nest.
....So it came to pass that she handed him the keys to the Cadillac stretch limousine and left the imprint from one of her number 10s on the seat of his pants. "Out F**king Spot!" she shouted as tumbled into the driveway. She loved using her extensive knowledge of Shakespearean quotations.

Not surprisingly he got lost on the Bush family's "Ponderosa," but after three days managed to find a stretch of paved road. The fact that he turned the wrong way onto a one-way street was of little consequence to him and he'd thereafter say, "I was only going one way!"
....He may been going only one way, but he neither knew where he was going nor watching where he was going. He nearly plowed broadside into the large truck laden with bushels of string beans. The driver emerged from the truck and looked at the frightened man behind the wheel.
....His deep voice boomed, "Well I'll be, if it ain't that no'count son of them Bushes! They finally kick your lazy ass out of the house?"
....Indignant, Dubya stammered, "I-I'm on m-my way to make a n-name for myself."
....The man laughed and said, "To find your fame and fortune, eh? Well, son this is your lucky day! Allow me to introduce myself." He placed his thumbs beneath the top of his bib overalls and pushed his chest forward, "Cheney, Dick Cheney."

Steering him toward the back of the truck the man said, "George .. is it? Yes, George the Inferior! I'm going to help you to get on top of the world. You'll be just like your old man."
...."B-but," said Dubya, "I don't wanna be no lousy President!"
...."Trust me boy. You would be!" the man grinned. "...And you'll have ol' Dick to thank for it."
....He pulled back the tarp on the bed of the truck and reached into the closest basket. He produced a handful of string beans and placed them in a small bag. "Lad," he declared, "these here string beans are special - they are magic beans." Seeing the frown on Dubya's face he added, "I didn't believe it either when LBJ sold some to me."
...."Wow!" Dubya's eyes lit up like a beacon. "Lyndon Baines Johnson?"
...."No, hell no. What's the matter with you, boy? I wouldn't buy anything from a damned Democrat," Dick replied angrily. "I bought them from Larry Bob Jones." He handed the bag to Dubya and continued, "You see, these here beans will grow a bean stalk so tall that it'll produce beans big 'nuf that you could feed all of them Mexes that be sneaking across the borders."
...."Wait a minute, Mr. Cheney," Dubya said. "I might be stupid, but I ain't dumb. There ain't that amount of beans in the whole wide world!"
...."Look, kid," he paused to make sure he was paying attention, "Since you been livin' a tax-sheltered life, you probably ain't heard of Haliburton. Well, I've been selling them my beans for years. Just one bean can feed a whole battalion of soldiers. Boy, you wouldn't believe what they can make outa beans these days and still pass it off as food!"
...."I don't know...it sorta sounds too good to be true if you ask me."
...."Tell you what I'm gonna do, Georgie," the man grinned and placed his hand on the other's shoulder, "I'm gonna give you those beans at a deep discount of price of ... let me ... see ... ah, one Cadillac limousine! Trust me, that's a helluva lot cheaper than Haliburton is chargin' the U.S. armed forces per bean."

An hour or so later as Dubya was walking the twenty miles back home, he was feeling good about himself. His mother was sure going to be surprised to see him back so soon and already successful. Besides, he was tired and wanted nothing more than to put on his Spiderman jammies and go to bed.

He didn't get the reception he was expecting when he arrived at the front door. It was curious, he thought to himself, that it appeared that the locks had been changed. All hell broke loose when he proudly announced his "brilliant" business deal to his mother.
....She snatched the bag of beans from him and hurled them into the night. Watching the bag disappear in the shadows he remembered that his father once told him that his momma had a better arm than Nolan Ryan. He knew the drill. Bending over, he assumed the position and awaited the inevitable force from the other number ten on his other buttock.
....From the splat made by the bag's landfall he knew that it had landed smack in the middle of the pig sty. He would spend the night crawling, groveling and groping through the muck, slop and pig crap. Exhausted he fell into deep sleep face-first into one of the pig's fresh deposits. 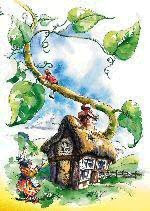 He awoke groggy and felt repulsed by the strong stench that seemed be permeating the air all about him. His entire body looked as if he'd been dipped in a chocolate fondue. An acrid taste from his finger tip proved otherwise. Leave us face it, it would not be the last time he would ever find himself in deep shit.

He couldn't believe the sight before him. It was a big mistake to rub his eyes at that particular moment, but he had to be sure he wasn't being delusional. Towering above him, seemingly disappearing into the clouds, was an enormous beanstalk!

No.1006
Curmudgeon responsible for this post: Hale McKay at 8:31 PM

I can't wait for the rest of the story!

Oh what a merry tale! I must make note to return for the rest!

Woo-hoo! And what is up the beanstalk? Hurry with Part 2!

This enormous beanstalk. Would that be Cheney's schlong, by any chance. I am wondered because I may not be able to get back for Parts 2, 3, 4, etc.

...and now, somewhere in Texas a village is missing its idiot!