Hey Monty, You're Playing My Song

I'm not one to shy away from recognition; I guess it's the price one has to pay for being laid back and modest. In spite of any attempts to remain anonymous and nondescript, I somehow manage to get noticed.

Could it be my summer garb of madras shirts, plaid bermudas, red argyle socks and black sandals?* Nah, I tend to blend in with the crowds with my choices of attire. Could it be my vestigial southern accent? Uh uh, don't y'all know that I been up here with the Yankees long enough for them not to notice one lick? I mean, can I help it if they don't know that victuals is just another word for food?

I have a hard enough time trying to figure out why waitresses in the eating places up here look at me funny when I ask if they have biscuits and gravy on the menu? How about that time when I asked one of them for mustard for my hot dogs. Can you believe that she asked if I wanted Grey Poupon on it? Tarnation! I thought New England was supposed to be sophisticated! Never mind what color it is, but who in their right mind would want poop on their hot dogs?

As I was saying, I try to be low key and not draw attention to myself. One way to do that is to roll myself up in a shell of anonymity. That way nobody will be pointing at the silly redneck hillbilly skipping along whistling Hank Williams songs.**

Now here's a new wrinkle! It isn't often that I get a song dedicated to me on a real honest to goodness radio station by a pretty DJ, namely Monty! She was going to play the song on her Friday night program at MPYR Radio, which can be heard right here. Catch her live tonight at 11 PM EST.

Well since I was unable to tune in for the live broadcast, I listened to her show from the archives. You see, I was very interested and curious as to what song she might be playing for little ol' me! Even though I don't get noticed, as I said in the opening of this post, it looks like I was noticed after all - and aw shucks, by a pretty girl!

My imagination started acting up and started visualizing a wish list of songs that she might play. "How about Make It With You by Bread? Or ... be still my heart ... the Stones' Let's Spend the Night Together ?"

So while I was listening to her show, I started thinking that maybe I should return the favor. I decided to do her one better and write her the following song. Okay, I didn't actually write it - it's a parody. With apologies to The Buckinghams, I chose Hey Baby, They're Playing Our Song.

By now you might be wondering just what song did Monty dedicate to me? Well, it turns out at first that I didn't pay close attention to her comments on one of my posts during the week. It seems that the dedication would follow the theme of my week-long bar and drinking posts. I must admit that Bar Room Buddies by Merle Haggard and Clint Eastwood is a most apropos song! Great choice, Monty. You certainly were playing my song. 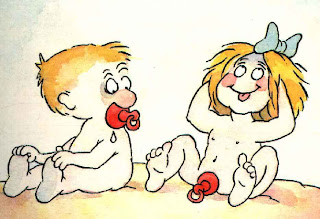 Thanks to my buddy Earl, I'll close this post with a birthday announcement.

This week we celebrate a special birthday. Monica Lewinsky turned 31.
Can you believe it?
It seems like only yesterday she was crawling around the White House on her hands and knees, and putting everything in her mouth.
They grow up so fast, don't they?
Then again, they learn so much at such young ages nowadays.

NO.1019
Curmudgeon responsible for this post: Hale McKay at 8:56 PM

HAHAHAHA! I love the song you wrote for me! :D
xoxoxoxoxoxoxo

See, now if I'd've been playing a song for you that was OUTSIDE your theme, it would've been Donna Summer's Love To Love You, Baby.
*teehee*

A perfect ending to a week of (hic) fun!

So, you've finally stopped skipping and whistling Hank Williams songs? The city HAS changed you, my friend. ;)

On a similar note, I stopped drinking and smoking and raising hell, and my mom called me a quitter.

Any drinking song is a favorite of mine.