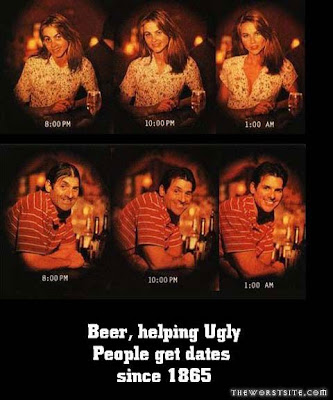 (This is day two of a week-long series of posts about that great pass time - drinking! If you missed "Monday Libations," just keep scrolling after you read this one to catch up. The drinking humor and jokes are on the house!)
TWENTY DOLLARS

A man is at a bar, having some drinks. After a couple hours he's pretty drunk and starts to feel like he's going to be sick. He rushes into the bathroom but doesn't quite make it to a sink in time and pukes all over his shirt.

As he's slouched against the wall trying to clean his shirt off with wet paper towels, another man comes in the bathroom.

The drunk says to the other in a slurred voice, "Maaan my (hiccup) wife issh gonna (hiccup) kill me!"

The other man says to the drunk, "Listen, what you need to do is put a twenty dollar bill in your shirt pocket. When you come home tell your wife that some drunk guy puked on you and gave you the twenty to pay for the cleaning bill."

The drunk finishes wiping the puke off his shirt and puts a twenty in his breast pocket. Feeling relieved about the situation and also feeling a little better, the man leaves the bathroom and has a couple more drinks.

Later that night the drunk staggers in the door to find his wife waiting up for him.

As soon as she sees him she starts yelling at him, "Look at you! You're a mess, you lousy drunk! How many times have I told you not to go out and get drunk like this? Who is going to clean that shirt?"

"Look hon, you got it all wrong. Thish guy at the bar, he pukes all over me and he givesh me twenty bucks to pay the cleaning bill," the drunk says to her while pointing at his breast pocket.

"Oh really?" she says, "Then what is the other twenty for?"

"Oh, thas from the guy that shit in my pants!"
THE BAR PICK-UP

Whilst enjoying a drink with a mate one night, this bloke decides to try his luck with an attractive young girl sitting alone by the bar. To his surprise, she asks him to join her for a drink and eventually asks him if he'd like to come back to her place.
The pair jump into a taxi and as soon as they get back to her flat they dive onto the bed and spend the night hard at it. Finally, the spent young bloke rolls over, pulls out a cigarette from his jeans and searches for his lighter. Unable to find it, he asks the girl if she has one at hand.

"There might be some matches in the top drawer," she replies.

Opening the drawer of the bedside table, he finds a box of matches sitting neatly on top of a framed picture of another man. Naturally, the bloke begins to worry.

"Is this your husband?" he inquires nervously.

"No, silly," she replies, snuggling up to him.

"Well, who is he then?" demands the bewildered bloke.

Calmly, the girl takes a match, strikes it across the side of her face and replies, "That's me before the operation."

Two men at a bar had been enjoying a few drinks for the past couple of hours and were pretty drunk when one of them notices a beautiful woman sitting in the corner. One says to the other, "Jeez, I'd really like to dance with that girl."

The other man replies, "Well go ahead and ask her, don't be a chicken shit."

So the man approaches the lovely woman and says, "Excuse me. Would you be so kind as to dance with me?"

Seeing the man is totally drunk the woman says, "I'm sorry. Right now I'm concentrating on matrimony and I'd rather sit than dance."

So the man humbly returns to his friend.

"So what did she say?" asks the friend.

The drunk responded, "She said she's constipated on macaroni and would rather shit in her pants."


DRINKS OF THE NEW MILLENNIUM*

Gorbachev = Vodka with a splash of port wine

Honeydew the Dishes = Midori and Dawn

Mary Poppins = Vodka, tomato juice, and a spoonful of sugar

Oil of Ole = Mazola and Sangria

Port in a Storm = Red wine and rainwater

A Rum with a View = Bacardi and Visine

Shipwreck = Cutty Sark on the rocks

ROTFLMAO! Love the new drinks list, though I'll definitely think twice about having too many now.:-)

Which reminds me, I think I'll play a song for you on Friday. *teehee*

I've actually had a Sundae Driver before. THat sucker's got a kick as the alcohol is absorbed by the ice cream and gets into your blood stream faster than the liquid.

Another variation was a Mimosa driver - champagne, vodka, orange juice and ice cream.

I'll stick to my margaritas, thanks.

Mmm...ice cream and alcohol. Can't get that at DQ. Those were hilarious!!

There are some on that list that actually sound pretty good.