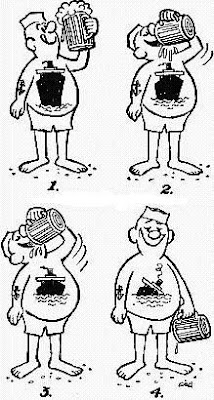 (This is day four of a week-long series of posts about that great pass time - drinking! If you missed "Monday,Tuesday and Wednesday Libations" keep on scrolling after you read this one to catch up. The drinking humor and jokes are on the house!)

A rather attractive woman goes up to the bar in a quiet rural pub. She gestures alluringly to the bartender who comes over immediately.
When he arrives, she seductively signals that he should bring his face close to hers. When he does so, she begins to gently caress his beard which is full and bushy.
"Are you the manager?" she asked, softly stroking his face with both hands.
"Actually, no," he replied.
"Can you get him for me? I need to speak to him," she said, running her hands up beyond his beard and into his hair.
"I'm afraid I can't," breathes the bartender, clearly in trouble. "Is there anything I can do?"
"Yes there is. I need you to give him a message," she continues huskily, popping a couple of fingers into his mouth and allowing him to suck them gently. "Tell him that there is no toilet paper in the ladies room."

A brunette, a redhead and a blonde walk into a bar one night. For the sake of brevity, each one orders her drink with an abbreviated code word.

The brunette walks up to the bartender and says, "Hey give me an ML." The bartender nods his head and hands her a Miller Lite.

Following her, the redhead walks up to the bartender and says, "I'd like a BL." Giving her a nod, the bartender pulls up a Bud Lite.

Last, the blonde walks up to the bartender and says, "Give me a Fifteen."

"A Fifteen?" the bartender replies, "What the hell is that?"

A guy walks over to a gorgeous chick sitting at a barstool and says, "I want to play with your ta-tas all night."

Shocked, the woman says, "Oh my god, do you see that huge guy over there? He's my boyfriend and he'll kick your ass!"

The man replies, "I still want to play with your ta-tas all night, and fill your scamper with beer and drink it."

Disgusted, the woman walks over to her boyfriend and tells him what's going on. "That man over there says he wants to play with my ta-tas all night."

The boyfriend stands up pissed off and rolls up his sleeves.

She then says, "He also said he wants to fill my scamper up with beer and drink out of it."

The boyfriend rolls down his sleeves, sits down and continues drinking.

"What are you doing, aren't you going to kick his ass?"

The boyfriend smugly replies, "I ain't gonna mess with a guy that can drink that much beer."

A couple of drinking buddies who are airplane mechanics are in the hangar at JFK New York. It's fogged in and they have nothing to do.

One of them says to the other, "Man, have you got anything to drink?"

The other one says, "Nah, but I hear you can drink jet fuel, and it will kinda give you a buzz." So they do drink it, get smashed and have a great time, like only drinking buddies can.

The following morning, one of the men wakes up and he just knows his head will explode if he gets up, but it doesn't. He gets up and feels good. In fact, he feels great! No hangover!

The phone rings. It's his buddy. The buddy says, "Hey, how do you feel?"

"Great", he said! "Just great"! The buddy says, "Yeah, I feel great too, and no hangover. That jet fuel stuff is great. We should do this more often!

Every afternoon after work, a group of local guys would meet at the neighborhood bar for a little pool and a few beers. Undoubtedly, somehow the subject always came up about which guy had the longest penis. Day in and day out the bartender overheard these braggarts and frankly it got a little boring.

One day, the bartender had heard the same old exaggerations once too many and he said, "All right, enough of this bullshit. I want each and every one of you to stand up here at the bar and I'm going to personally measure each of you and just MAYBE we can put a stop to all this crap."

Well, they all gathered around the bar, unzipped and laid it out there to be measured. Just then, the door opens and in the blast of sunlight stands a gay guy.

The bartender looks up and says, "Can I help you?"

The gay man takes a look at the line-up and says, "Well, I was going to get a cocktail, but I think I'll just have the buffet."


REASONS WHY ALCOHOL SHOULD BE SERVED AT WORK...

* It's an incentive to show up.

* Sitting on the copy machine will no longer be seen as "gross."

* It leads to more honest communications.

* It reduces complaints about low pay.

* It cuts down on time off because you can work with a hangover.

* It helps save on heating costs in the winter.

* Increase job satisfaction because if you have a bad job, you don't care.

* It eliminates vacations because people would rather come to work.

* Bosses are more likely to hand out raises when they are wasted.

* Suddenly, burping during a meeting isn't so embarrassing.

* Employees work later since there's no longer a need to relax at the bar.

* It makes everyone more open with their ideas.

* Everyone agrees the work is better after they've had a couple of drinks.

* Eliminates the need for employees to get drunk on their lunch break.

* Increases the chance of seeing your boss naked. (?)

* It promotes foreign relations with the former Soviet Union.

* The janitor's closet will finally have a use.

* Employees no longer need coffee to sober up.

* Babbling and mumbling incoherently will be common language.


I heard a commercial in the next room that got my attention. The narrator promised there would be more bars! Then I realized it was a commercial for wireless digital phone service!

No.1016
Curmudgeon responsible for this post: Hale McKay at 9:08 PM

LOL, I love the "alcohol at work" list, been hearing a lot about that lately. I wouldn't be able to imbibe, however, having to drive in my job. After all, I might hit a bump and spill my beer...

I think I'm starting to get tipsy Mike, is this a five day week of libberrashuns.