Guess Who's Coming To Dinner? 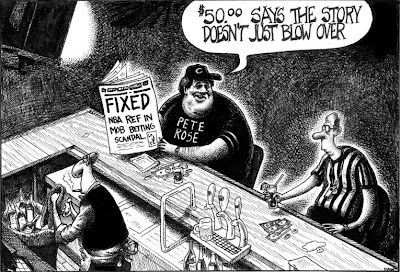 You know what they say, rules are made to be broken! Just who said that, anyway? (So I can wallop him or her up the side of their head.)

Every now and then however, I am tagged for a Meme (pronounced mee-mee) with a theme (thee-mee?) that gives me pause to reconsider my stance. The latest one is no exception.

To whom do I owe this outrageous waste of my precious time honor? With a Bronx cheer tip of the hat to the lovely lovely Sudie, I will under protest gladly respond to this meme. If you click on her name, you can check out her 7/31/05 post to see her guest list.

Rather than invite five other Bloggers, as per the rules, I will just leave an open invitation to anyone who also finds this idea appealing. I will, however, abide by the other rules.

Who would you invite to a dinner party if you could invite any ten persons past or present, dead or alive, to join you? (You have to, of course, be presumptuous enough to think that these people would accept the invite.)

I thought long and hard on this one. Then like a bolt out of the blue I was hit with an epiphany! I would only have to place two settings on the table. (Paper plates, of course!) Then I could order two three-piece dinners and a couple of sides from KFC. That would leave me needing to spring for one more item - a bottle of Ripple - a feast fit for a king.
....You're probably thinking, "Hey! Wait a minute! I'm supposed to invite ten guests!"
....You are thinking I'm bending the rules big time. Au contraire, my friends. Trust me, I think I am well within the rules. You'd have to get up awfully early stay in bed late to outsmart me.
....It's really quite simple, my plan. You see, I have only to invite to invite the one and only Rich Little. That's right, the impressionist. He will be the other nine required guests. It will be a fun and interesting evening talking to the likes of Jimmy Stewart, John Wayne, Jack Benny, and Richard Nixon, just to name a few.
....Alas, the more I thought about it, maybe it wasn't such a great idea after all. Poor Rich would be spending the entire evening getting up and moving from chair to chair and back and forth. The poor devil would be completely worn out in no time.

(Sigh!) Back to reality! Aha! With a snap of my fingers I had it! No, it wasn't another epiphany. I understand we're only allowed one epiphany in a twenty-four hour period and I'd already had my quota. This was just one of those flashes of brilliance! (These are not bound by limitations - you can have as many of these as you want, although some of us have them more often than others.)

I can here the gasps and cries of stunned shock! I know, I know. What is Jesica Rabbit, a cartoon character no less, doing on this list? First of all, as I have revealed in this Blog in the past, I sort of have this affinity for redheads, and I just love the way she's drawn. (You might note that she's not the only redhead on my list of invitees.)
....I don't think I need to explain my other choices, do I? I think you'll agree it is a collection of some very beautiful women. What? You're still in shock? Look all I have to do is look around the table at them and ... SIGH!

Oh! I get it now! I see what's bothering you. You are shocked at my guest number 10. I did say she was a throw-in, didn't I? Okay, I'll come clean. Believe it or not, there is a method to my madness. You see, it's like this, I like a little competition. When the first nine of my lovely guests see Rosie at the other end of the table panting and salivating like Pavlov's dog, they will all unfailingly gravitate to my end of the table. You might say they will be all over me like stink on crap; or like fat on a mother-in-law; uh, like sweet on sugar!

You might say I will have stacked the deck in my favor. I feel confident that my chances would be better than Rosie's. (Sigh!) Drat! I just found out that my wife's scheduled engagement for the day of my dinner has been cancelled.

I need to draft another guest list! I guess I should at least keep with the spirit of this meme and come up with a serious list, huh?

*I included Pete Rose because I admired his hustle and love of the game when I was a kid. Okay, he gambled on baseball, but only after his playing days and after he broke Ty Cobb's hit record. I would personally like to give him my vote of confidence that he should be inducted into The Baseball Hall of Fame.

My...you really MILKED that meme topic for all its worth, didn't ya?

Gee - I'm a redhead too (although it's artificially facilitated) BUT I don't look like ol' Jessica Rabbit.

So why the hell do you read MY blog?

I'm truly happy you explained that whole Rosie thing-- I was worried about you for a minute! ;-D

Great rationale for Rosie. I might have found a place for Nicole Kidman.

Thanks for making it optional to contribute/respond/develop a response to this.

i've been thinking about doing this one because i find it fascinating to read others' lists.

yours was entertaining and enlightening. thanks:)

I like both of your lists, they would make for a very interesting evening :)

I may try this on my own site!

Have a great weekend.

Rosie as a weapon. She could be used lots of ways, now that you thought of it.

Jack - You're so right about this being optional. I just may have tagged you!

Lime - Thank you. I'm sure your attempt at this meme would be very interesting.

Rain - I think your list would be a good one. I'll drop in to see if you follow through.

Hoss - I know you probably don't appreciate my picking on Rosie - that is without giving you the first shot!