Back Off in Your Own Jack Yard

Sometimes blog material is right there in your morning paper!

I'll bet your lawn doesn't get this much attention. The women of this 3-month-old company in Memphis, Tennessee, are giving new meaning to bikini cuts. 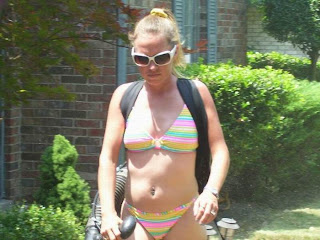 The women of Tiger Time Lawn Care offer to mow customer's lawns dressed in bikinis - a service that attracts more attention to the ladies than the lawns.
...."Oh yeah, they honk and yell. They can do everything you can imagine," said employee Blair Beckman, 21, of the men in passing cars. 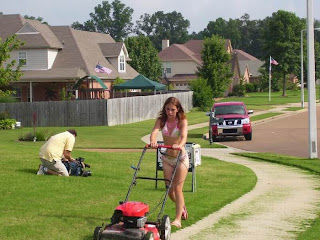 "You get the attention but you also get a tan, which I need," she added.
....Owner Lee Cathey said the bikini service makes mowing lawns more interesting, although the fee is slightly higher.
...."The yards definitely get more attention when there's a bikini on the lawn," Cathey said. "Some customers sit in lawn chairs and have a beer while watching."
....To extend the business beyond the summer, in the fall they plan to rake and pick up leaves in the bikinis. Cathey said that so far there hasn't been any interest in a male version of the bikini lawn cut.
....I wonder if they'll shovel snow during the winter?

A Dorchester, Ma. pimp talked a neurologically challenged teen into turning tricks for him. Fortunately, for the girl, on her first night out on the street, she propositioned a Chelsea police officer and was arrested.
....The charges against her were dropped in exchanged for her cooperation which led to the arrest and subsequent 10-year sentence of 24-year-old Devin Benders. The girl has since moved on to graduate from East Boston High School.
...The girl, nicknamed "Cupcake," met Benders on-line through the much maligned My Space web site. He convinced the girl that she could 'make money and not get into trouble for it' by prosituting herself in Chelsea.
...The girl is inflicted with ataxia, a degenerative disease of the nervous system that affects coordination.

It took several hours, but after the layers upon layers of decades of makeup were chiseled off the withered face, the body was finally identified as that of Tammy Faye Messner, age 65. Several cosmetics companies have begun exploratory studies to consider filing for bankruptcy.

A man who was deliberating over a new TV asked the young salesman its country of origin. "I'll have to look on the box," the young man said before disappearing into the stockroom. On his return he announced, "Built in Antenna, sir."

Late one night, a New York Yankees fan and a Boston Red Sox fan collided head-on while crossing a bridge. Fortunately, both were unhurt, but their cars were pretty banged up.
..."This is a sign," said the Yankees fan, "that we should put away our diferences and live as friends instead of rivals,"
..."You're right," said the Red Sox fan. He popped open the trunk and took out a bottle of bourbon. "Let's toast our newfound friendship."
...The Yankess fan took a big long swig and handed back the bottle. "Your turn."
..."Nah," said the Sox fan, tossing the bottle into the river below. "I think I'll just wait for the police to show up."

Question: What do you call an assemblage of stars?
Answer: A rehab clinic.

No.1055
Curmudgeon responsible for this post: Hale McKay at 8:58 PM

Drink anyone? I'll be in the yard with a pitcher of cold Margaritas. It would have been daiquiris, but I can't spell daiquiris.

(Yeah, I went to spell-checker. I was correct I couldn't spell daiquiris.)

Oops. My wife is calling to get my butt back into the house. My blogging privileges may be curtailed for a while. tee hee. giggle, snerx.

LOL! I knew there was a reason why I don't mow.

I never do. ha ha

Besides, if the wife isn't looking, I can always lick it off of the counter.
giggle

Now, where is that blender?

Jack -
Blender? Ever try putting the blades from a mixer on a hand drill? LOL! It sure whips 'em up fast.