If there is one thing certain about a Friday the 13th, it is the fact that it is invariably followed by a Saturday the 14th! (You have my permission to quote me on that.)

This Friday the 13th was essentially uneventful for me. I was only able to find one ladder propped up against a building on a busy sidewalk. Alas, only one of the pedestrians exhibited any signs of horror when I deliberately passed under it in defiant nonchalance. If that wasn't bad enough, the small hand mirror that I purposely let fall to the sidewalk while I was under the ladder didn't break! I was even wearing my cap which bears the large number "13" on it.

I suppose there are some who might argue that those two acts cancelled out each other. Others might say that since my deliberate acts didn't achieve the desired effect, it was my bad luck.

To me stuporstitions superstitions and even the acknowledgement of them, fly in the face of wisdom and logic. We don't live in the dark ages! If you said to me that unfortunate events happen because of fate, I might accept that. However, if you suggested carelessnes, clumsiness, and plain old ignorance as explanations, you'd get an A+ on your report card if I were grading.

Some Saturday the 14th sillies:

Overheard at a Science Convention:
~1st Geek - "See ya later, Calculator."
~2nd Geek - "After while, Audiophile."

Said one frog to another: "I've decided that when the time comes, I'd like to donate my body to scientific research."

Yoga - Origami for the body.

The dyslexic agnostic suffers from insomnia because he stays up all night wondering if there is a dog.

Anatomy is something everyone has, but it sure looks better on a woman!

Hear about the redneck who broke his remaining tooth on a chocolate? He didn't know it was his girlfriend's cell phone. 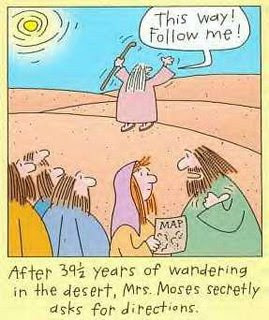 What do Viagra and Disney Land have in common?
They both leave you standing around for an hour for a 2-minute ride.

"The only time a woman really succeeds changing a man is when he's a baby." - Natalie Wood

Curmudgeon responsible for this post: Hale McKay at 10:14 PM

Where do you get these cartoons? They're better than today's paper! Love your site!

It's a good thing you weren't standing under my ladder when it collapsed on me. That would have been really bad luck.