Cleave it To Me! 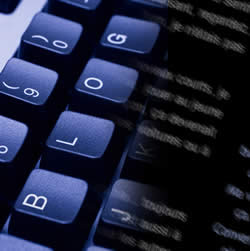 With a blank screen staring back at me, my equally blank thought processing center was fishing for ideas but coming up with not a single byte.

I suppose I could have posted that blank screen. I could call it art. The subject? I could have called it "Polar Bear in Blizzard."

Well, there is always the Blogger's failsafe ! If for whatever reason one cannot come up with something to post, relief can be found no further than the daily newspaper. Of course, one can always "google" for the news. Why waste time typing from newspaper articles, when one can copy and paste from the Internet.

I was shocked. What do suppose the most widely covered and hottest news story was out there in both the print and electronic news services? The Minneapolis bridge tragedy? The war in Iraq? The 40-year-old woman who gave birth to her 17th child? No, no and no! 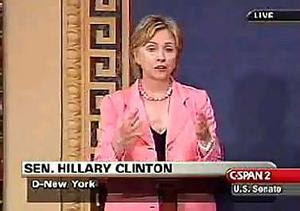 Hillary Clinton and that 'subtle V-shape'.

The following is an excerpt from The New York Times:

The subject line of the message refers to a July 20 article in The Washington Post about the neckline on an outfit Mrs Clinton wore during a congressional speech she gave two days earlier.

It "sat low on her chest and had a subtle V-shape", said the article, by Robin Givhan, a style writer who had watched the speech on C-Span2.

"The cleavage registered after only a quick glance. No scrunch-faced scrutiny was necessary. There wasn't an unseemly amount of cleavage showing, but there it was."

Givhan's article described the cleavage as "an exceptional kind of flourish" even for a woman who, in her campaign for president, has given up on her one-time "desexualised uniform" — a black pantsuit — in favour of "a wide array of suits and jackets" that have allowed her to play "the fashion field".

Givhan won a Pulitzer Prize last year for criticism of fashion as well as what politicians' clothing says about their position and power.

"Showing cleavage is a request to be engaged in a particular way," Givhan wrote. "It doesn't necessarily mean that a woman is asking to be objectified but it does suggest a certain confidence and physical ease."

Mrs Clinton's campaign, not at all happy about the article, is hoping its attack on it will prove to be a lucrative tool.

"Frankly, focusing on women's bodies instead of their ideas is insulting," says the fund-raising email message, written by senior Clinton adviser Ann Lewis.

"Would you believe that The Washington Post wrote a 746-word article on Hillary's cleavage?" the message said. "Apparently, it was showing when she gave a speech in the Senate about the skyrocketing cost of higher education. Now, I've seen some off-topic press coverage but talking about body parts? That is grossly inappropriate."

Asked about the criticism, Givhan said her type of reporting had a role in election coverage.

"I do think that when people are delivering a message, the message is essentially consumed in different ways, and that depends on how it is delivered," she said. "The tone of voice, the appearance, the context, these things all come into play."

All I gotta say is, "YOU CALL THAT CLEAVAGE?" You could drop a quarter in there and it would fall all the way to the floor. I guess that explains Bubba's actions when he occcupied the Oval Office. Poor guy. Remember that chocolate bar commercial? Sometimes you feel like nut; sometimes you feel like Mounds.

Much ado about nothing!

Right on, Peter. Unbelievable that this would dominate the news.

It was talk about Hilary's or Pelosi's cleavage or chop column inches from the paper like the Times is doing...