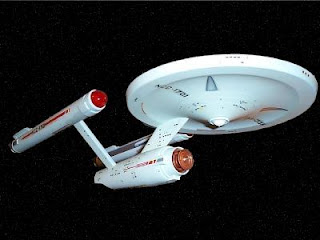 What if they'd manned the Starship Enterprise with a compliment of Rednecks? Kinda gets your mind a-wonderin' don't it?

Space: Between my ears is the final frontier. These are the road trips of the Starship Fenderthighs; it's boring missions to explore strange nude alien gurls, to seek time away from the naggin' wife, to boldly go where no revenuers has gone before.

Captain's Log, Captain Jim Bob Cork in the big chair,stardate 864952617.99 1/2 , aw hell, September 20, 2007. Tarnation, I ain't never gonna get used to that stardate crap. I am in command of the first Redneck crew to be assigned to a starship and sent sent off on a mission into deep shit space.

Anyways, the Fenderthighs is approachin' the Butt Crack Nebula, a strange formation of gases shaped like a plumber's butt whiles he's a hunkered down a fixin' a sink or somethin'. The ship's sensors done picked up a signal coming from the area.

I called over to the Communications Officer, "Ensign Yoohoo, cain't you get a fix on that signal yet?" (I was always takin' this chance to get a peek at Yoohoo's drawers what showed under that short skirt of her uniform. Praise be the Star Fleet regulations regardin' dress codes!)
...."No, sir. There seems to be some interference, Captain Cork."
...."Mr. Clock, what do think about the signal?" I asked the Science Officer.
...."Captain, I'd rate it a six. It ain't got no beat. It could use some bass. Too hard to dance to."
...."Clock, be serious. Do I have to page Nurse Tabernacle up here to check your ass out?"
...."Damn, Cap'n Cork, that woman is always checkin' me out. Iffin she ain't a-pesterin' me in the shower , she's a-chasin' me all over the ship with a damned rectal thermometer!" Clock was visibly shaken.
...."What can I say? She likes that big ol' redneck butt of your'n."
....He got all kinds of serious all of a sudden, "Accordin' to my readin's, Cap'n, that is no welcome beacon. It's a distress signal."
...."RED ALERT!" My Worst Officer Piker shouted. There was somethin' funny lookin' on top his head. I'd ask him about it later.
....I shook my fist at him and tried to countermand his order, "Relay that ... er delay that ... aw hell, ignore that order!"
....The ship shook slightly. I hung my head in disbelief. Someone, and I knew rightly who t'was too, had done went and fired off a torpedo.
...."Ensign Strokenoff, who gave you the order to fire a Futon torpedo?" I swear on my momma's grave, he was the only Russian Redneck I ever heared tell of.
...."Cap'n!" Clock shouted in alarm. "My spectral analysis showed nothin', but the rectal analysis shows that the signal is made up of highly volatile methane and trace elements of what appears to be skunky beer, prolly Pabst or Carlings! It sure enuf is a distress signal."
...."You mean ...?" I tried to speak but was fearful of Clocks discovery.
...."Yes! It's an interstellar fart!"
...."RED ALERT!" said you know who.
...."Captain Cork!" It was Chief Engineer Snotty calling over the PA system. "Who'd the hell fired a Futon torpedo into a field of methane gas with traces of Pabst or Carlings in it? Does any y'all realize what's a-gonna happen when that Futon torpedo detonates in that gas? "
....I answered, "It'll be the end of the universe as we know it?"
...."No."
...."It'll mean the end of the Fenderthighs and her crew?"
...."No, not exactly."
...."It'll be the end of this Blog posting?"
...."Well, maybe that too..."
...."RED ALERT!" (Persistent bastard ain't he?)
...."What? What's gonna happen, Snotty?"
...."Well sir, when that Futon torpedo done explodes in all that there gas, there's gonna be a whole lotta shit sent flyin' all over this quadrant of space!"
...."Snotty! Tell me, can the Fenderthighs survive the blast?"
...."Sure thing, Cap'n. No worries."
...."Then why did you up and make that urgent call to the bridge?" I asked my Chief Engineer.
...."Cap'n, the Fenderthighs is my darlin', my life ... you knows that."
...."Yes...and...?"
...."Well sir, when that explosion done takes place ... why there's gonna be all kindsa shit splattered all over the Fenderthigh's paint job. ...And I ain't gonna be the one to clean it up neither!"
...."Captain!" Mister Clock looked up from his science station. "The Futon torpedo is set to detonate ... now!"
....Even in the soundless void of outer space the blast generated an ear-splitting "Pfffttt!"
....I looked at Clock in wonder, "It was a dud?"
...."Yes, Captain. The interstellar fart was was a dud - a silent one!"
...."RED ALERT!" (Someday I'm gonna find some more duties for Number Two.)
...."The Futon torpedo, Clock? What happened to it?"
...."Fascinating ... I could say ... logical." He turned to me and added, "The torpedo entered the nebula's butt crack - through the anus of the cloud!"
....I gasped, "Then if it detonates inside the nebula ... ?"
...."It could mean the end of the ..."
...."The universe as we know it?" I interrupted.
...."No."
...."The end of the Fenderthighs and her crew?"
...."Well ... no."
...."The end of this blog posting?"
....On my signal Communications Officer Yoohoo done snucked up behind Piker and put some duct tape over his mouth. "Rmmm Mmmrt"
...."No, Captain. The Blog posting will end soon enough as it is."
...."Then what will happen?"
...."It will be the end of the Butt Crack Nebula as we know it, Captain."

Mr. Clock calculated that due to the immense pressures and radiation inside the nebula that there was odds of 1:1 that the torpedo would detonate before the end of this Blog posting.
....I decided to retire to my quarters for some rest and suggested that the crew members do the same. I was exhausted and needed some serious quality nappin' time. I dove headlong onto my special custom-made Captain's bed. Bye and bye, as was usually the case when I retired to my cabin, Dr. Smasher snuck in and crawled into bed with me. As was always the case when we was both ready I said to her, "Engage!" 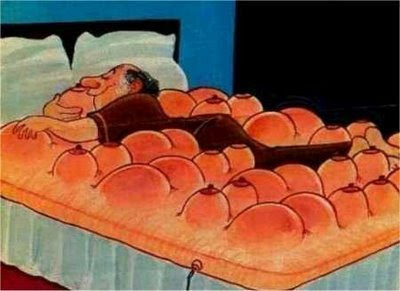 A couple of hours later I joined some of the officers down at 10 Backward, a lounge and restaurant used for the crew to unwind. I noted that Hymen, a strange alien woman who ran the place, was workin' the bar. I don't know how someone who would hook up with Ted Danson, defend Michael Vick and take a job on the TV show The View was able to land a job on a Federation Starship, but she sure served a mean Saturnian Anchovy Sundae!

While I was about to sit down and enjoy my order Commander Piker did it again, "RED ALERT!"
....I looked up from under the table where I'd ducked and saw that the red-headed ship's MD, Doctor Smasher had entered the lounge. With everyone glarin' at him, Piker shrugged and returned his attention to his drink.
....I couldn't take it no more. That thing on his head was botherin' me to no end. "Number Two," I said to him, "Would you be so kind as to tell what the f**k is that on your head?"
....At the same time he pulled the thing from his head, our ship's Councellor Toy walked over and snatched it from his hands. "Piker, how many times must I tell you? Stop takin' my drawers as souvenirs!"

Mr. Clock's voiced boomed over the PA sytem, "Capain Cork, the Futon torpedo exploded seconds ago. You're not gonna believe what happened!"
...."Put it on the view screen down here in 10 Backward, Mr. Clock."

Everyone in the lounge grew silent in awe at the sight that done appeared before us. It wasn't the end of the universe as we knew it. It wasn't the end of the Fenderthighs and her crew. The Butt Crack Nebula had been transformed. Or maybe it had done been turned 180 degrees away from us! For now there before us was a true wonder of the universe.
....The Fenderthighs and her crew would go down in history for discovering the newly formed Vagina Nebula. I nodded to my First Officer Piker and said, "Make it so, Number Two."
...."RED ALERT!"

It is however, the end of this Blog posting as we know it.

(If you enjoyed this post and are a fan of Star Trek, you'll like a companion post, Rednecks in Space, which answers the question 'What if a Starship Captain was a Redneck.')

No.1120
Curmudgeon responsible for this post: Hale McKay at 9:39 PM

Piker shore knows how to git everone's attenshun, don't he?