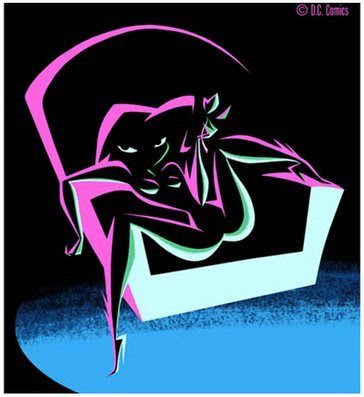 One evening last week, my girlfriend and I were getting into bed.

Well, the passion starts to heat up, and she eventually says, 'I don't feel like it, I just want you to hold me.'

So she says the words that every boyfriend on the planet dreads to hear...

'You're just not in touch with my emotional needs as a woman enough for me to satisfy your physical needs as a man.'

She responded to my puzzled look by saying, 'Can't you just love me for who I am and not what I do for you in the bedroom?'

Realizing that nothing was going to happen that night, I went to sleep.

The very next day I opted to take the day off of work to spend time with her. We went out to a nice lunch and then went shopping at a big, big unnamed department store. I walked around with her while she tried on several different very expensive outfits. She couldn't decide which one to take, so I told her we'd just buy them all. She wanted new shoes to compliment her new clothes, so I said, 'Lets get a pair for each outfit.'

We went on to the jewellery department where she picked out a pair of diamond earrings. Let me tell you... she was so excited. She must have thought I was one wave short of a shipwreck. I started to think she was testing me because she asked for a tennis bracelet when she doesn't even know how to play tennis.

I think I threw her for a loop when I said, 'That's fine, honey.' She was almost nearing sexual satisfaction from all of the excitement.

Smiling with excited anticipation, she finally said, 'I think this is all dear, let's go to the cashier.'

I could hardly contain myself when I blurted out, 'No honey, I don't feel like it.'

Her face just went completely blank as her jaw dropped with a baffled, 'WHAT?'

I then said, 'Honey! I just want you to HOLD this stuff for a while. You're just not in touch with my financial needs as a man enough for me to satisfy your shopping needs as a woman.'

And just when she had this look like she was going to kill me, I added, 'Why can't you just love me for who I am and not for the things I buy you?'

Apparently I'm not having sex tonight either... but at least she knows I'm smarter than her.

DATING: The process of spending enormous amounts of money, time, and energy to get better acquainted with a person whom you don't especially like in the present and will learn to like a lot less in the future.

EASY: A term used to describe a woman who has the morals of a man.

EYE CONTACT: A method utilized by a single woman to communicate to a man that she is interested in him. Despite being advised to do so, many women have difficulty looking a man directly in the eyes, not necessarily due to the shyness, but usually due to the fact that a woman's eyes are not located in her chest.

FRIEND: A member of the opposite sex in your acquaintance who has some flaw which makes sleeping with him/her totally unappealing.

INDIFFERENCE: A woman's feeling towards a man, which is interpreted by the man as "playing hard to get."

IRRITATING HABIT: What the endearing little qualities that initially attract two people to each other turn into after a few months together.

NYMPHOMANIAC: A man's term for a woman who wants to do it more often than he does.

SOBER: A condition in which it is almost impossible to fall in love.

ATTRACTION: The act of associating horniness with a particular person.

LAW OF RELATIVITY: How attractive a given person appears to be is directly proportionate to how unattractive your date is.

YOU CAN'T PLEASE EVERYONE

A woman was shaking out a rug on the balcony of her 17th floor condominium when a sudden gust of wind blew her over the railing.

"Damn, that was stupid," she thought as she fell. "What a way to die."

As she passed the 14th floor, a man standing at his railing caught her in his arms. While she looked at him in disbelieving gratitude, he asked, "Do you suck?"

"No!" she shrieked, aghast.

So, he dropped her. As she passed the 12th floor, another man reached out and caught her.

"Of course not!" she exclaimed before she could stop herself. He dropped her, too.

The poor woman prayed to God for one more chance. As luck would have it, she was caught a third time, by a man on the eighth floor.

"I suck! I screw!" she screamed in panic.

Yes Phil, I decided to clean it up a bit. You never know how many adults may be reading this blog.