Beat of a Different Dumb 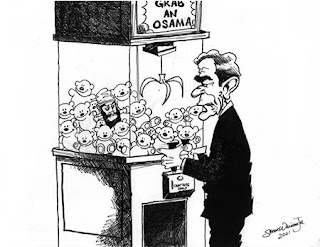 Although he has reluctantly suggested that he would call back some of our soldiers stationed in Iraq, President Bush's resolve to find Osama bin Laden has not diminished.

It has been learned by this Blogger that several years ago President Bush had received a letter from Osama bin Laden.

After numerous rounds of 'We don't even know if bin Laden is still alive', bin Laden decides to send George W. a letter in his own writing to let him know that he is still in the game.
.... Bush opens the letter and sees only a coded message: "370HSSV-0773H". He can't figure it out, so he asks Karl Rove.
.... Rove suggests that the head of the CIA would certainly understand code, so Bush sends it to George Tenet. Tenet, however, can't figure it out, either. He suggests, "How about Condi? She has a doctorate, that means she's smart."
.... But Dr. Rice is baffled, too. As Bush is pondering the mysterious message lying on the desk before him, Colin Powell enters the Oval Office. When he sees the paper and reads what is written on it, he asks, "Sir, where did that come from?"
.... Bush replies testily, "Supposedly it's a message from Osama bin Laden. But what the hell does '370HSSV-0773H' mean?"
.... Powell clears his throat and replies, "Mr. President, I think you've been looking at the message upside down." Inspite of the fact that Hillary accompanied her husband to Arkansas' state capital, thousands were on hand on the front steps of the entrance to a Victoria's Secret shop to witness the unveiling of the former President's statue.

Said long time resident Gladys Hornpout, "It's so lifelike. It's as if he was standing there doing what he did naturally when he lived and served here."

Distracted by the store front window displays, Bill excused himself to buy a "present" for wife. Unfortunately they had nothing in her size or in burlap.

Oprah Winfrey was recently asked to join Kirstie Alley and Valerie Bertinelli as a spokesperson for Jenny Craig.

She refused the offer saying that she had an effective weight loss program of her own.

"Just today," she said, "I burned up 2500 calories. I set fire to my Fettucine Alfredo recipe!"

Word of the Day

Hey Hale....
I finally made it by! Your page design has changed. I like it!

I love the Oprah Winfrey comment. Maybe I should burn the whole recipe book!

The way her weight was fluctuating for the longest time, she probably had several bonfires going at once.