The following is a report of a bloody battle that been savagely fought by a band of brave warriors. The account is presented here as told to this Blogger by the two sole survivors. 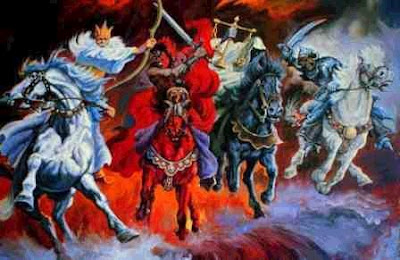 The battle lines had been drawn. The enemy was out there somewhere. Soon, they would be laying siege upon our fortifications. Though greatly outnumbered we were prepared for the onslaught yet to come.

It had been a back breaking day. We had fenced the perimeter with barbed wire. There were tense moments when we laid the minefield. No one wanted to accidentally trip the deadly devices. We'd spent the better part of the afternoon digging the moat. Our fingers were sore and bloodstained from handling the piranha as we stocked the ten-foot wide moat.

I had personally examined the pillboxes to make sure that the machine guns had been properly loaded. While I was busy with that, my next in command had been busy calibrating the mortar launchers.

Perspiration streamed from every pore of our bodies. We covered in mud and dirt, products of our preparations. We'd finally concluded that we were as ready as possible given the short amount of time we had before the enemy made their move. Before settling into my foxhole I first adjusted my ammo belt before placing a dozen grenades around the edges of the hole. Next to me my fellow soldier had been practicing the same ritual. Finally in unison, we fixed our bayonets.

They would be charging like the Mongol hordes of the past. We were prepared to face the enemy even if they were being led by the Four Horsemen of the Apocalypse!

Then we heard it. There was a blood-curdling scream that sounded like women charging into a Filene's Basement to take advantage of promotional giveaway of free nylons and pantyhose.

They appeared around the bend. We shuddered at the sight of those savages charging forth. The barbed wire temporarily slowed them. Their first casualties were those who had fallen at the barricade of sharp steel. Their bodies formed a makeshift bridge for those behind to pass over.

There were staccato detonations of mine after mine as they surged fearlessly forward. Even the moat failed to dissuade the resolve of the attacking forces. The piranha were feasting well, but they could only gorge themselves so much. The tidal wave of humanity poured across the moat.

Their numbers reduced greatly it was clear our time on earth was growing shorter with each passing foot they advanced. Many more fell to the red-hot blazing guns being fired from within the pillboxes. Those too failed to halt the siege. The mortars shells exploded in smoke shrapnel and flesh as the shells tore through their ranks.

We had spent our ammo and before we could bring our bayonets to play they swarmed relentlessly over us. In less than two hours they were raising their weapons and standards in victory. We never had a chance.

Somehow, we had been spared. They had shown us mercy. Soon, laden with their spoils, they were gone.

I crawled to the supply area. I had hoped they left us something. Even though the battle was over, we would need some sustenance if we were to survive the night. They left us the dregs of our food food supply. If it had been slightly palatable, they had carried it off in their retreat.

I culled through the rations and cried in despair. All that remained were a few unwrapped licorice sticks, four Dum Dums lollipops, several Heath Bars, a few packages of Mike & Ike, some Jujubes, and a package of raisins. None of it would hold us over for long. WHat remained was virtually inedible.

The Reeses Peanut Butter cups, the Twix bars, Milky Ways, Snickers, Mr. Goodbars - gone - all gone! The enemy had pillaged all the good stuff! We feared we would not make it through the night.

There you have it, folks. This has been an exclusive report from the front lines in the aftermath of one of history's bloodiest battles. It will go down in history as the Halloween Night Massacre.

Piranha? Is that how you spell that?

Add another ditto! I don't know how you do it, but keep on doing it.