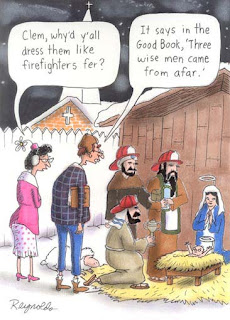 Growing up in the rural hills of West Virginia, Christmases in the 50's were simple and not nearly as commercial as those of today. Chrismas decorations and displays weren't seen until maybe the second week of December.

We didn't draft up lengthy lists of the toys we wanted. We just crossed our fingers and waited to see what Santa brought us. In those days Santa Claus wasn't seen in every department store. The only time we ever saw Santa was on television, when he rode on that float at the end of the Macy's parade.

I don't recall anyone ever selling Christmas trees on a parking lot. Finding that special tree was both a tradition and an adventure. One of my rites-of-passage was when my dad allowed me for the first time to accompany him on the trek up into the wooded hills to fetch our tree. He even let me carry the hatchet.

It was always a special time when the tree was finally brought into the house and everyone gathered around and decorated it. What a special moment it was when the living room lights were turned off and dad plugged in the lights on the tree. Oh, sometimes there would be a pop and some sparks flying from the over-loaded outlet, and sometimes you would smell the ozone when the fuse blew. (The television and the lamp had to be unplugged when we turned on the tree lights and vice versa.)

One sure sign that Christmas was near was when the mailman dropped of the annual Christmas catalog from Monkey Wards. (Montgomery Ward department stores were bigger than Sears and Roebutts where I lived.) If us kids weren't fighting over who got to look at that catalog first, we were all sprawled on the floor together. We would be spellbound for hours by the endless brightly-colored pages of the toy section.

Yes, the Christmases back then might have been simple and quaint, but I can remember many of them as if they were yesterday. Funny, I can't seem to remember what gifts I received last year, and yet I remember those Lincoln Logs, Tinker Toys, and Tonka trucks from fifty years ago.

Granted I am much older now and my wants and needs are different, but I miss those simple times. Maybe if our parents knew what we now know, perhaps they would never let Christmas become so ... so commercial.

Have Yourself A Merry Redneck Christmas 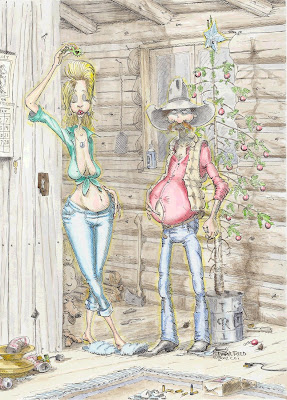 Have yourself a merry Redneck Christmas.
Git your ass out of bed,
Go out there and get to work
So the kids can be fed.

Have yourself a merry Redneck Christmas,
Nekkid like a blue jay,
Pretty soon your cousin
Will be in a family way.

Here we are in the welfare lines,
Makin' ends meet if we're able
Faithful friends who live near to us
Are comin' for some Black Label.

Through the years
Y'all will live together
If her parents allow,
Or you will marry her
Shotgun the best man.
And have yourself a merry Redneck Christmas ... now

Damn, there ya' go gettin' me all misty-eyed...Lincoln Logs, Tinker Toys, and Tonka trucks...I certainly remember those.

Thanks for the nostalgic trip into your past. I remember some of the very same things.

That's the kind of Christmas I remember most fondly. I find today's commercialism disgusting.