My files of pictures, images and cartoons of Dubya is quite extensive. Curiously, however, I only had a handful of those with a Christmas theme. That meant one thing: Surf's Up!

So I went web surfing for some Bush Christmas pics. 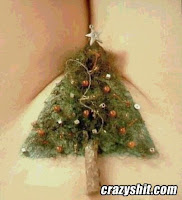 Ah yes, I forgot to be careful what I asked for - because I got it! My first search began when I typed in "Christmas Bush" onto my browser. The pic at the left is the result.

Reversing the words to "Bush Christmas" yielded this rose-tinted pic of a woman placing some cookies out for Santa. The correlation of this picture and "Bush Christmas" escapes me, however. [sic]

When I used "Dubya Christmas" as my keyword I found the cartoon at the top of this post, which also suggested the title.

Now this is a cartoon that is sure to scare children and adults alike!

...And if that isn't a good segue to a Christmas Carol Parody, I don't know what is!

Santa Bush Is Fighting a War
(Sung to the tune of:
Santa Claus is Coming to Town)

You better watch out
You better not cry
Better not pout
If you voted for the guy
Santa Bush is fighting a war.

He's gonna take you away from home
He's gonna send you over to Iraq
He knows you'll be a good soldier
So you'll be glad to go back.

O! You better watch out!
You better not enlist
Better not pout
Of this I insist
Santa Bush is fighting a war. 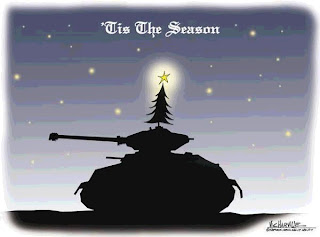 He'll see that when you're sleeping
It'll be in a hot desert tent
He make sure you have another tour
Because he's our President!

O! You better watch out!
You better not enlist
Better not pout
I'm telling you, resist
Santa Bush is fighting a war.

Santa Bush is losing the war.

No.1181
Curmudgeon responsible for this post: Hale McKay at 9:31 PM

I made the mistake once of typing the word teenager. Another time it was high heels. I couldn't believe what came up.

Google was founded by men...

Wonder how long it took to decorate that tree.